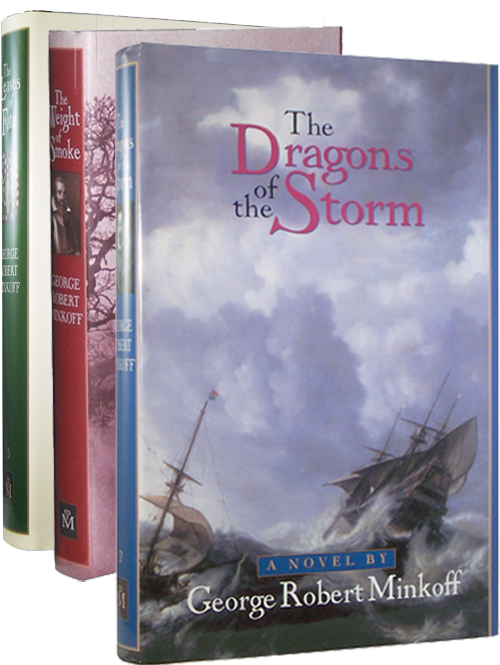 The Dragons of the Storm (Vol. 2 of In the Land of Whispers)

Volume Two of the epic novel In the Land of Whispers

"The Dragons of the Storm is as enthralling as The Weight of Smoke. I think John Smith and Francis Drake would rejoice in George Minkoff's lively re-creation of them." — Edmund Sears Morgan

The Dragons of the Storm continues on directly from The Weight of Smoke. When Powhatan forcibly adopted Captain John Smith into his tribe, he declared that after three wounds the river would speak to him. While fishing in the Chesapeake toward the end of a long expedition, Smith is stabbed by a stingray and falls deathly ill. Because he is set to assume the presidency of Jamestown on their return, the fate of the colony may depend upon his recovery. The old alchemist and mariner, Jonas Profit, doctors this second wound, and to ease Smith's suffering starts to tell of the daring circumnavigation of the world by Francis Drake. So begins the second volume of George Robert Minkoff's visionary epic, In the Land of Whispers, revealing the desperate events in the lives of both Drake and Smith that will lead finally to a permanent settlement for the Elizabethans in the New World. John Smith is followed from the initiations of the first volume into a year of unforeseen trials and their consequence. While the London Company's aristocrats broker the colony's fate with their wealth and power, the colonists struggle an ocean away merely to survive in an unforgiving land. Famine, contagion, mutiny, and war with Powhatan threaten constantly. And the one man who might save Jamestown from itself, John Smith, will have to confront not only the venality of his enemies, and the legacy of his spiritual fathers, but also the mysteries of his destiny.

Add to Cart
Also available from:
<
>
HISTORICAL NOVELS SOCIETY
Captain John Smith, upon his election as president of the Jamestown Colony in the 1620s, wishes to organize the colonists to become self-sufficient and produce their own food to survive the harsh winters of the Virginia coast. Unfortunately, politics and greed play against his desire to make the colony succeed. While on an exploration and trading expedition to the Chesapeake Bay, the ancient mariner Jonas Profit continues his tale of Sir Francis Drake. Several years earlier, Drake was forced by the Spanish in the Pacific to circumnavigate the globe. He returned home to England a hero, was knighted by Queen Elizabeth, and then was ordered to lead an English squadron of ships to prevent invasion by the fleet known today as the infamous Spanish Armada.
This novel is volume two in the Land of Whispers Trilogy, continuing the saga of both John Smith and Francis Drake. While each man is faced with fighting enemies of the English empire and contends with others who hold wealth and power, both work toward their own visions of a colonial empire.
This is an extraordinarily well-written series of books. I believe that years from now, critics of fine literature will rank these books with the writings of Patrick O’Brian and Dorothy Dunnett as great historical fiction — thoroughly researched and written with exceptional prose. I am looking forward to reading Mr. Minkoff’s final episode about the Land of Whispers.
— Jeff Westerhoff