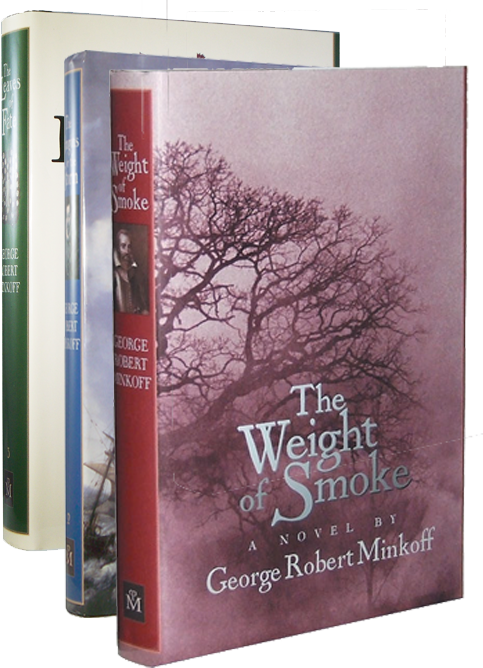 The Weight of Smoke (Vol. 1 of In the Land of Whispers)

​". . . The author is a marvelous wordsmith, occasionally using poetry in his prose: "The next day the world was eyes and trumpet calls. A sky of banners and ladies graced the city's walls." His story-within-a-story, the adventures of Francis Drake several years prior to the establishment of Jamestown and Smith's adventures, is handled cleverly. Minkoff demonstrates the difference in class structure.... It's amazing that the colony ever succeeded. The importance of Drake's story helped me understand Captain Smith's drive to explore the coast of North America, as he tried to locate the Northwest Passage to the Pacific. The author also introduces Pocahontas and Powhatan and explains the effect of the English settlement on the local Native American tribes - who try to maintain their culture as they war amongst each other - as well as the "magic" of tobacco, the weight of smoke. The novel is not a quick read, but one to be savored. — The Historical Novels Review (Jeff Westerhoff)

For Volume 2, The Dragons of the Sea, click here.

To read a sample from The Weight of Smoke, click on the link below.

Add to Cart
Also available from:
<
>
"The Weight of Smoke is an excellent, vivid evocation of the beginnings of the Jamestown Colony. There was a continent to be grabbed -- the great American middle, between the French in Canada and Spain in the Caribbean -- but the grabbing was not easy. And, in a broader sense, it's a story of Europeans encountering full-face the might of the American wilderness and the peoples who inhabited it." -- Larry McMurtry

"Had John Smith actually written this 'secret diary' of his life, readers might well have enshrined it on their bookshelves with the works of Shakespeare, Gibbon and other noted British authors. George Minkoff's writing in The Weight of Smoke is that good.... Its almost 400 pages move fast and colorfully describe what life must have been like during those tough first years. Many of the colonists certainly weren't the best suited to begin a great new country, but thanks to Smith and the others, they did it. This reader, for one, looks forward to the second and third volumes of the trilogy when they are published...." -- Robert Shultis, The Virginia Gazette

"Does a book have to be over a hundred years old before it is a classic? That's what I kept thinking as I was reading George Minkoff's monumental The Weight of Smoke, the first volume in a trilogy named In the Land of Whispers. It is much like Moby Dick, laden with meaning. But...The Weight of Smoke is not only very well written, it is also far richer in its observations of human nature and the meaning of history, all within a fascinating story of an era that is rich in discovery and adventure." -- Berkshire Home Style

"Written by antiquarian expert George Robert Minkoff, The Weight of Smoke is the first of a three-volume historical fiction epic, In the Land of Whispers, set four hundred years ago on the shores of what would one day become the state of Virginia. Young Captain John Smith carried dedication and drive at the colony of Jamestown, yet one disaster after another beset the colonists: intrigue, avarice, corruption, disease, starvation, and violent war with the indigenous peoples. A prophecy is spoken concerning Captain John Smith: that his acts in this untamed world will be remembered not in terms of immortal glory, but rather in degrees of desperation. And deep inside, he carries a yearning desire for Powhattan's favorite daughter, Pocahontas. The Weight of Smoke reads with the flourish of an odyssey, and the dark reality of grim history. Enthusiastically recommended." — Midwest Book Review

"A vivid retelling of crucial events, enlivened with aphorisms and, best of all, a new incarnation of a legendary romance." — William T. Vollmann

"A truly unforgettable experience. The language is yet again a new instrument--vital and pliable. Minkoff has given us back so much of what we have erased in order to survive by forgetting." — Jorie Graham

It's the richest prose I've read in a long time. . . Every page is decked with brilliant lines -- an astonishing wealth of unexpected metaphors. Yet the narratives are not impeded. You just have to slow down to take in such awesome prose. The Weight of Smoke is a tour de force, a fabulous tissue of words, that will be hard to ignore. I should think fiction readers, or readers of historical fiction will be smitten by this new entry to the field." — Jill Johnston

"This is not a dry historical novel. Minkoff has a gift for writing that pulls the reader into the story. . . . I highly recommend this novel...especially to those interested in the early founding of America." — Reader Views
Click to download a sample pdf of an early chapter.

A new review of the audiobook: https://booktrib.com/2019/09/heavy-is-the-weight-of-smoke-a-historical-drama-now-on-audiobook/

Watch the Book Trailer on vimeo: In the Land of Whispers

Watch the Book Trailer on YouTube: In the Land of Whispers
​