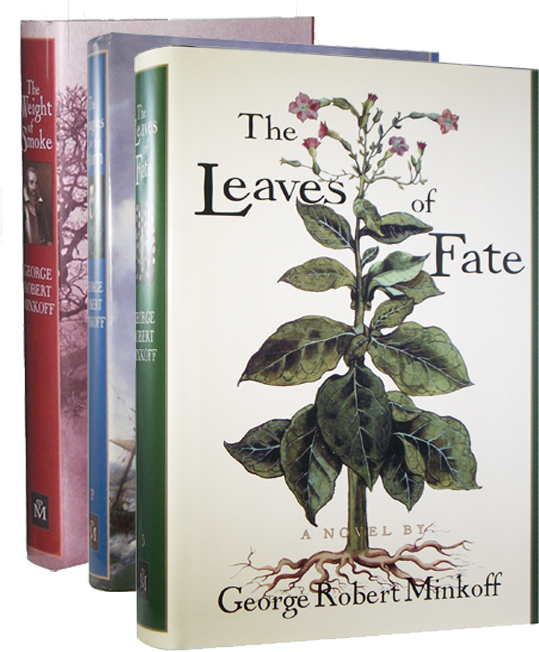 The Leaves of Fate is the third and final volume of an epic fictional chronicle, In the Land of Whispers. The first volume is concerned with initiation. The second volume with trial and expulsion. This final volume is the book of exile.

The three books present the extraordinary histories of the hero of Jamestown, Captain John Smith, and the great Elizabethan explorer before him, Sir Francis Drake. Smith's journals record the events of his own life, and reprise the tales told him around the campfires at Jamestown by Jonas Profit, an alchemist who accompanied Drake on his voyages.

In this final volume Smith is forced to return to England, never to set foot again in Jamestown. Profit has died, but not before passing along the final scenes of Drake's downfall, as well as that of Profit's teacher, the alchemist John Dee. Despite a subsequent expedition to map the New England coast, Smith is cast aside by the Virginia Company, and reduced to the role of a keening witness, all the while the colonies move inexorably toward becoming a slave economy built around the cultivation of tobacco. In London, Smith's reunion with Pocahontas in England is brief and bittersweet, but despite continuing hardship and neglect, Smith becomes the best-selling author of his time.

For Volume 2, The Dragons of the Storm, click here.

To read a sample of the text, see the link below.

Add to Cart
Also available from:
<
>
HISTORICAL NOVELS REVIEW
Between 1610 and 1630, the Jamestown settlement in the English colonies began to take shape – the colonists left the safe confines of the walled-in town and established farms nearby, growing the popular cash crop, tobacco. Infringing on the lands held by the local Native Americans would cause many deaths between the white settlers and the local tribes. John Smith, banished from the community upon threat of death, is isolated in England writing his stories of his experiences settling Jamestown. Intermingled with these current events is his remembrance of his discussions with Jonas Profit, an alchemist and a sailing mate of Sir Francis Drake. Drake’s encounters with the Spanish and his attack on the Spanish mainland are also revealed.
This novel is the third installment of the fictional account of the Land of Whispers. The language the author employs to tell his tale mimics the speech of the 17th century. At times, it was difficult to follow the story without rereading sentences, but because I have read the first two installments of this trilogy, I knew what to expect. Mr. Minkoff is a very talented writer whose use of English is similar to that of Shakespeare’s sonnets – you must read and concentrate on the significance of his choice of words to fully comprehend the novel while you follow the plot of the story. If you are looking for a novel that is fast-paced and full of action, this book is not for you. If you value the tone and construction of the English language in sentences that are poetic in nature and add refinement to the ordinary novel, you will enjoy and savor this book. Highly recommended for readers with sophisticated literary tastes.
​— Jeff Westerhoff

Click for the opening chapter of The Leaves of Fate.