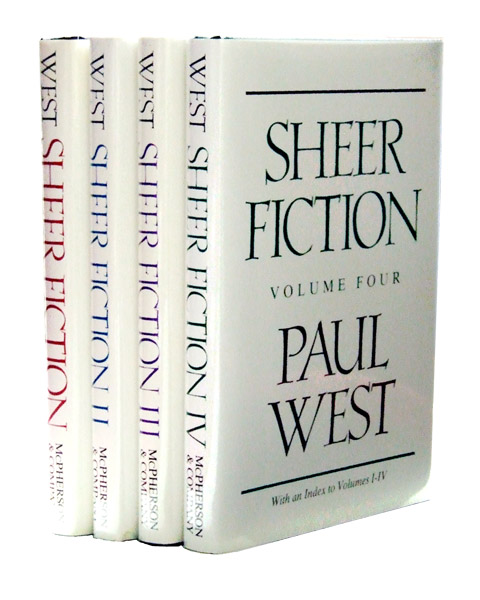 
WEBSITE EXCLUSIVE. Save $16 by buying the complete hardcover set. Only three complete sets are still available of ALL FOUR MATCHING CLOTHBOUND VOLUMES OF SHEER FICTION
Included in Volume Four is an index to the entire series.


VOLUME THREE: A baker's dozen of essays -- with such intriguing titles as "Remembrance of Things Proust," "Middle River Stump Jump," "A Vision of Bright Cannon-Fodder," "Tan Salaam and the Aga Khan," and "Thomas Mann, Englishman" -- along with an ample section of quick takes on Abish, Barth, Vollmann, Alvarez, Genet, Beckett, Lessing, Ghose, and some twenty more. As with his earlier volumes of Sheer Fiction, half the pleasure of reading West's belles lettres is the discovery of several writers' works you've never read, and which you're thereafter compelled to plunge into with abandon. The other half, of course, is the pleasure of reading a master stylist with language and wit at his complete command.


VOLUME FOUR: This fourth and final installment begins with two paeans for departed friends—the novelist John Hawkes and the astronomer Carl Sagan—and a review of a book about famous literary suicides. Then West immediately launches into a lengthy cross-examination of Nobel Prize novelist J.M. Coetzee's curious employment of West himself as a character in the novel Elizabeth Costello. That alone is worth the ticket. But the sixteen essays which follow record the distances between mimetic projection of fictive personae and the "visionary plunge into what cannot be kept out of the mind"—dalliance, in other words, versus necessity. Here, predictably, West is at his best. Subjects range from an epic poem of the Titanic to the teaching of Samuel Beckett, and from a meeting with Borges to the complexities of Faulkner. West considers the future of the novel, conducts inquiries of the works of William Gass and Bradford Morrow, and offers asides about his own working methods and how he came to write certain of his books. Fittingly, Sheer Fiction IV includes an extensive index to all four volumes.
​
Add to Cart
<
>
Thirteen years after the previous installment, Paul West’s wonderful Sheer Fiction series here comes to an end: four volumes spanning three decades of essays, reviews, and occasional writing, and together in excess of 800 pages. For a writer like West, who makes no bones about how easily his work comes to him, who slyly admits to having “two-thirds done of a three-thousand-page novel conceived in defiance and written in joy”—and this in addition to his published work, whose quantity, diversity, and near-miraculous consistency of quality could easily drown the unwary reader—this number may not seem particularly impressive. Given, however, that these are only West’s uncollected pieces—sporadic emanations in response to an essay commission or review assignment—West’s achievement, and that of the Sheer series, seems all the more staggering. This volume in particular reads not as an assortment of leftovers, but as a chapter in an autobiography—and not just the autobiography of a man, but of his tools: West’s prose regarding itself with a measure of well-earned arrogance as its author pauses to praise William H. Gass, have dinner with Borges, or poke holes in J. M. Coetzee. The Borges piece is particularly delicious, with West making us a gift of his and the great man’s improbably perfect repartee on De Quincey, the “Boom,” and the scurrilities of academia. Equally tantalizing is the tiny scrap we’re offered from an abandoned book, a Hyde to the Jekyll of West’s The Secret Life of Words, which would have catalogued the author’s glosses on a number of writers’ pet concepts (Joyce’s “epiphany,” Proust’s “involuntary memory”). West has been doing his duty replenishing the English language so consistently and well for so long now that, in light of his recent illness, one could be forgiven for fearing for the future of the word in a world where he is silent. With Sheer Fiction complete, however, and The Shadow Factory, his “aphasic memoir,” on the way, we can rest assured that the world, and the word, are for the moment safe in the hands of their champion perceiver. — Review of Contemporary Fiction

"In his many works of fiction, memoir, and criticism, West proves himself to be a writer blessed with a cheerfully mordant wit, an acrobatic way with words, ebullient learnedness, and a deep if wry perception of the human condition. Each previous Sheer Fiction volume has offered pleasure, revelation, and provocation, and now, in West's fourth collection of biting literary essays, he again covers a remarkable breadth and complexity of terrain...." — Booklist, review by Donna Seaman

"Thorough, passionate, opinionated—West never lets his judgments interfere with his considerable ability to evoke the texture and character of the work under review." --Washington Post Book World

"As usual, West's style is provocatively intelligent and his ideas direct and responsive to the most pertinent questions about literature."--The Star-Ledger

"With wit, erudition, and an expansive intellect, West argues for fiction that creatively manipulates its material rather than passively reflecting it.… Sheer Fiction demands the attention of any reader seriously interested in the purposes of fiction."--Wilson Library Bulletin

"An excellent field guide to numerous little-known subspecies of the modern novel from a tireless and entertaining observer." — Review of Contemporary Fiction
Volume One
Volume Two
Volume Three
Volume Four