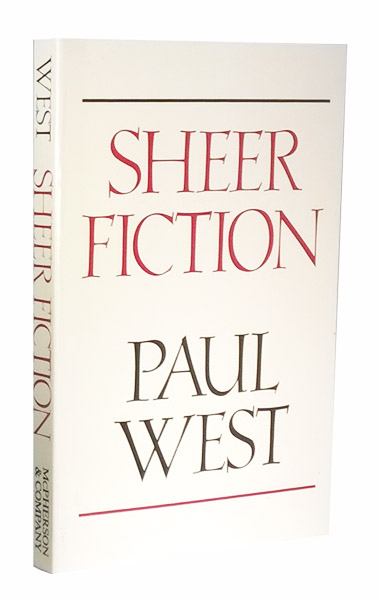 SKU: 2983
$10.00
$10.00
Unavailable
per item
"Sheer pleasure." — Kirkus Reviews
"Sheer joy." — The New York Times
"Compared to his, most literary criticism is a genteel snooze"                                   — Publishers Weekly
"Accessible to ordinary readers" — Small Press Book Review
​
Perhaps no one has reclaimed the indispensible value of creative fiction with greater verve, style and intellect than Paul West in this first of four collections which review a panoply of works written from around the world. These six essays and fifty reviews consider the works of such writers as Gabriel Garcia Marquez, Vargas Llosa, Herman Hesse, Hermann Broch, Christa Wolf and Blaise Cendrars. An essential book for lovers of the twentieth-century novel.

​​Paperback, 224 pages, 6 x 9", 1987, 0-914232-98-3
Add to Cart
<
>
"Some of the essays focus on the provincialism and anti-intellectualism of American prose, which has preoccupied West since the late '60s. All three volumes [of Sheer Fiction] also include impassioned, playful, and rigorous accounts of writers West admires, including Spain's Juan Goytisolo, America's William Gass, and Germany's Thomas Bernhard. Volume I, the most substantial of the three, contains 'In Defense of Purple Prose,' a polemic that should be memorized by creative-writing students and critics alike." — Bill Marx, Boston Phoenix

"[Paul West's] genuine excitement for this fiction is contagious and his own language is as splendid as the purple stylists he celebrates. ... This lively collection fills the reader with a renewed sense of awe before both the genre and the cosmos it emulates with such panache."
— Review of Contemporary Fiction

"Unlike most books that deal with contemporary fiction, this one is as interesting for its dazzling prose style as for the useful and often witty insights it offers. ... Every single piece in the book reflects West's great learning, originality, and clarity of mind." — Small Press

"Critics of all stripes would do well to read this work for the example that West presents in his charged prose. ...[F]or readers seeking an alternative view of contemporary fiction or those wishing to see more of West, this volume is a delight. Whatever else he may be, West is never a dull writer and one who says incomparably well what others stumble to articulate" — Studies in the Novel

"Paul West is a lively and imaginative writer, and his erudition permeates every page." — MaGill Book Reviews

"A brilliant collection of critical writing." — Wilson Library Bulletin
PART ONE: ESSAYS
"A Rocking Horse on Mars"
"The Shapelessness of Things to Come"
"The Fable's Manger"
"In Defense of Purple Prose"
"The Jazz of Consciousness"
"The Tiger in the Music Room, the Mollusk in the Zoo"