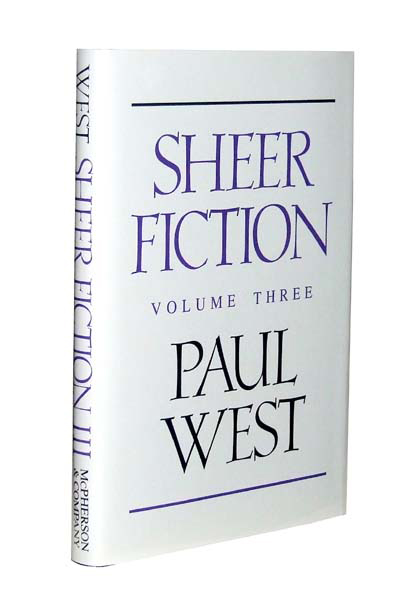 We continue our presentation of Paul West's nearly universal literary interests with this third collection: a baker's dozen of essays — with such intriguing titles as "Remembrance of Things Proust," "Middle River Stump Jump," "A Vision of Bright Cannon-Fodder," "Tan Salaam and the Aga Khan," and "Thomas Mann, Englishman" —along with an ample section of quick takes on Walter Abish, John Barth, William T. Vollmann, Alvarez, Jean Genet, Samuel Beckett, Doris Lessing, Zukfikar Ghose, and some twenty more. As with his earlier volumes of Sheer Fiction, half the pleasure of reading West's belles lettres is the discovery of several writers' works you've never read, and which you're thereafter compelled to plunge into with abandon. The other half, of course, is the pleasure of reading a master stylist with language and wit at his complete command.

Add to Cart
<
>
"Paul West brings to his essays and reviews the same razzmatazz and passion that characterize his highly burnished fiction. . . . Unlike his two earlier collections of literary journalism, this latest volume emphasizes the essay and lecture over the review... There is something telling and thoughtful on any page. . ." — Washington Post Book World

"Astute, provocative and unfailingly literate, West has won a deserved reputation as a critic's critic. Sheer Fiction III shows why: Its 52 entries testify to his willingness, figuratively speaking, to go to the ends of the Earth for good writing.... As in his earlier collections, West pulls off the difficult trick of mainatinig an engaging prose style while assuming he writes for people who know the meaning of 'coracle,' 'energumen' and 'transhumance.' He achieves this partly through a moral and intellectual fearlessness that allows him to generalize boldly without devolving into oversimplification. . . . All the more reason, then, to celebrate the work of West, a critic who still holds himself to the most exalted of standards: that of trying to write at least as well as the authors whose books he considers." — Janice Harayda, The Plain Dealer

"West represents one of those great independent literary forces whose vibrant assessments begin in controversy and by unmitigated good sense become the common assent of many. West's criticism often helps to make an author's purposes clear. Given the quality of the authors he reviews in these volumes we have a near literary history of the more substantial literary establishment as well as lesser known talents." — The Reader's Review
PART ONE: ESSAYS
"Remembrance of Things Proust"
"Thomas Mann, Englishman"
"Night 1002: When It All Goes Down"
"The Absurd Revisited"
"A Vision of Bright Cannon-Fodder"
"Where Novels Come From"
"Judge Not"
"Back to My Desk"
"Shoptalk"
"Middle River Stump Jump"
"Literary Lions at the Public Library"
"Tan Salaam and the Aga Khan"
"Enemy Coast Ahead"
"Borrowed Time