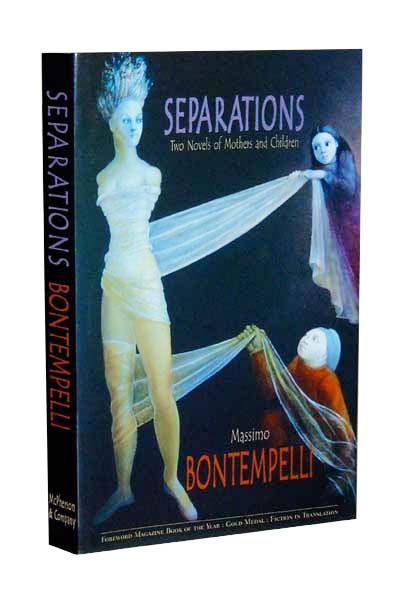 SKU: 1704
$16.00
$16.00
Unavailable
per item
Two novels by one of the masters of 20th century Italian fiction, published in English for the first time, The Boy with Two Mothers and The Life and Death of Adria and Her Children are alive with a subtle "magic," presenting unforgettable characters across a canvas of European socio-political upheaval. These are classic stories — richly imbued with imagination, charming in their irony, and eminently readable — which will haunt the mind long afterward. In each, Massimo Bontempelli fulfills what he believed was the writer's ultimate goal: "to tell a dream as if it were reality and reality as if it were a dream." Before the explosion in the 1960s of the fantastic fiction we associate with Latin American writers, it was Massimo Bontempelli who, in 1926, defined a new literary style he called realismo magico. For decades afterward the term was everywhere almost synonymous with his name. At his death in 1960, the New York Times described Bontempelli as the "leader of the futuristic school in the 1920s . . . whose goal it was to create a world of fantasy which would have the objectivity of the natural world."

​Paperback, 315 pages, 5.5 x 8.5", 2004, 0-929701-70-4
Translated from the Italian by Estelle Gilson.
Foreword Magazine "Book of the Year" Gold Medalion for Fiction in Translation
For the clothbound edition, go here.
Add to Cart
Also available from:
<
>
" 'The Life and Death of Adria and Her Children' is a charmingly discursive sendup of the family saga in which an agelessly beautiful young matron's personality (and, indeed, "soul") is explored with disarming subtlety and quietly increasing menace. It's a brilliant story, but 'The Boy with Two Mothers' is even better: here we have a fable of reincarnation, about a boy who is simultaneously born twice, to different families, on the same day--with enigmatic, disastrous, and blithely hilarious consequences for both (the understandably confused) "Mario/Remario" and his stunned "parents." Limpid, haunting tales, a bit reminiscent of Isak Dinesen and Julio Cortazar (though a better comparison might be to the stories of Bontempell's Italian counterparts Dino Buzzati and Anna Maria Ortese). Translator Gilson and publisher McPherson have performed a magnificent service here. One hopes they'll be able to bring us more of Bontempelli's strange and enchanting fiction." — Kirkus Reviews

"Motherhood is the theme of these two intimate novellas by Italian writer Bontempelli, who preceded such better-known authors of "magic realism" as Jorge Luis Borges and Alejo Carpentier by more than two decades in his fusion of the miraculous and the matter-of-fact. ...The elegantly restrained passion of these tales, penned in Bontempelli's delicate prose, proves yet again the writer's literary genius."  Publishers Weekly

"Appearing in the middle of the author's long, industrious career-- Bontempelli (1878-1960) wrote plays, poetry, and essays as well as fiction-- Separations is a complete triumph. Bontempelli's work prefigured the magic realism popularized by many Latin American writers, and Separations is an excellent example of this style. ...Elegant, superbly crafter, and masterfully written, these tales are not easily forgotten; the heroines are haunting and the plots finely honed. Bontempelli is truly a "fantastic" writer. All public and academic libraries should own at least one work by this great writer, and it would be wonderful if more of his works were translated." — Library Journal

"The literary style of magical realism...actually has an Italian ancestry in Massimo Bontempelli... Like the writers who followed him, Bontempelli created rich, fantastic worlds that blended fable and precise description, dream and reality. ...In each story, the themes of loss and yearning combine with a humorous irony, so that even background events of political upheaval seem distant and hazy. Bontempelli's richly imagined worlds, described as if he'd dreamed them just the night before, are beautifully haunting and fabulously written." — ForeWord Reviews

"If Americans associate Magical Realism with Jorge Luis Borges, Alejo Carpentier and Gabriel Garcia Marquez, writers who followed Bontempelli's lead, it is because, remarkably, Bontempelli's work was never translated into English. The task of addressing this unfortunate circumstance has been taken up by Estelle Gilson, whose translation of two of Bontempelli's most famous novels have just been published under the title Separations: Two Novels of Mothers and Children. Bontempelli's merging of the magical and the real carries with it a number of dangers. Magical realism has the effect of making the servitude of the present to the past appear magical and fulfilling. Addressing the abandoned, fulfilling the unfulfilled, magical realism is not only a fusion of fantasy and reality, but of past and present. There is a window during which past and present can maintain a symbiotic interrelationship. Since the present moment is in perpetual motion it must carry the past along in its wake or be forced into a fixed position. It is the tendency of the past to become moored which causes the present to be subsumed into the matrix of the past. Magical realism grants a sense of liberation, presenting the past as being unmoored by the interrelation of fantasy and reality. Yet this state of affairs, the happy interrelation of present and past produced by magical realism, is itself a fantasy, and its effect has the tendency to be far more unreal than real. A strong narrative voice, sharp, concise, and analytical, is required to balance the "magic," a narrator with classical virtues in fact. It is striking that Bontempelli's work is strongly marked by just such a narrative presence, and that his work presents a mingling of the classical, the romantic, and the magical which is marvelously effective. The excellence of Bontempelli's writing makes his primary legacy as a literary theorist seem inappropriately inadequate. Incisive and beautiful, Seperations is a rich, rewarding and timeless reading experience." — Franklin Journal
Estelle Gilson's translation from Italian of The Stories and Recollection of Umberto Saba won both the Italo Calvino and PEN Renato Poggioli awards, and the MLA's first Aldo and Jeanne Scaglione award in 1994 as the best literary translation of the previous two years. Her fiction, essays and articles appear in many publications. She lives in Riverdale, New York.
Jacket painting: "Cariatide Delivree" by Leonor Fini, 1986, courtesy of Galerie Minsky, Paris. ADAGP. Copyright © 2001 by the Estate of Leonor Fini.