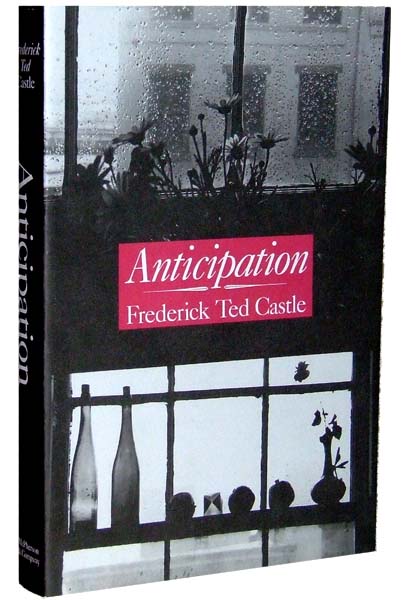 Written when the author was about 25 years old (the writing spanned three years), Anticipation is a book full of wisdom and the laughter of youth. It could be characterized as the emergence into the world of an intriguing mentality: like James Joyce's A Portrait of the Artist as a Young Man, it contains, as the author says, "all my youthful revery." For his discursive exploitation of all kinds of narrative devices, the author has been compared to other markedly innovative writers, such as Melville and Sterne. But Frederick Ted Castle's book is really unlike any other, and almost necessarily Anticipation waited eighteen years after its completion in 1966 to be first published. It was re-released in the Recovered Classics series in 1996.

​While full of poetry, it is written in a lively and readable prose style. Although abandoning many conventions, it affords compensating pleasures. Sometimes referred to as an "epic novel," Anticipation redefines both the epic and the novel: the character called "myself" becomes a modern hero not because his exploits are heroic but because of the scrutiny devoted to the interior of his psyche, especially as refracted through portraits of friends. Upon its first appearance, the reviewer for The New York Times Book Review predicted: "Anticipation will last. It is a presence one wants to have around. . ."
Add to Cart
Also available from:
<
>
"Though he records contempt and sorrow with the same taxonomical attention as fealty and pleasure, so much is the entire opus premised in the suck of his desire, one can only see it as a work of great good humor. He has eschewed the narrative principle -- the order he mostly calls history -- the lock-step of sequence, and then, and then -- for a ruminative order unconstrained by the descriptive imperatives of realism. Mr. Castle's works charms with its truly authoritative confidence in the power of poetic perception to generate form, the architecture which amounts to meaning... He writes of what interests him, unabashedly, at length, in depth, with an alert sense of multiple possibility, and however he likes... Anticipation contains a variety of humor that makes most books seem perdurably monoliterate. There are puns of course, and absurdly extended metaphors... There are literary jokes, some short...some long... There are jokes on himself, and shall I say, the thoroughness of his approach: 'Now unfortunately there is a type for boredom that is so strong that the reader must willfully ignore it or else I will never be able to say what I have to say.' (This Sternian disingenuity urges the reader to the book's defense. It is not boring...)" — Patricia Eakins, Exquisite Corpse

"Certainly one of the most provocative and arresting fictional performances to be published in several years." — Washington Post Book World

"The belated publication of Ted Castle's Anticipation in 1984 alerted some readers to the fact that a great unknown novelist was living among us."
— John Ashbery
"Ambitious, sincere and marvelously well-written." — Columbus Dispatch

"Lovely, intimist prose... The connecting thread? Simply that of duration: the book covers a whole year. But Castle keeps us reading, thanks to his finely modulated humor, his unabashed (yet never self-congratulatory) excess, and his shrewd balance between firm clarity and teasing obscurity... [A] truly strange, depth-filled miscellany -- with the inner coherence that's usually lacking in avant-garde, non-narrative fiction." — Kirkus Reviews

"[T]he content, which includes quotes and parodies and much insightful commentary on literature, art, sex and life, usually with a humorous twist, is redeemed from sheer waywardness by the unifying force of a powerful intelligence. ...Original, engaging, maddening." — Publishers Weekly

"Anticipation is sometimes a bit like Joyce or Stein or James but it is not much like them...This is a new kind of prose, a new voice." — John Ash, Voice Literary Supplement

"An experiment is as rich as its effect. The wondrous quality of joyous digging in language and intellectual play that permeates Frederick Ted Castle's first novel is half the story. Or, rather, it is the only story in Anticipation, a novel in which everything that happened to Mr. Castle in the year 1963 is put down in brilliant, funny and parodistic turns. Mr. Castle's novel has a tradition - it stems from the discursiveness of Laurence Sterne (it apes Tristam Shandy in substituting photographs for blank pages) and James Joyce (it pays allegiance to Ulysses in its parodies of early literature and contemporary antinovels and high - or low - romance). For extra measure, there are diagrams, letters and notes in poor handwriting, as well as long passages of undistinguished elementary French. But, unlike Sterne and Joyce, and even the French antinovels of the 1960's, Anticipation lacks a real narrative. For some readers the unity of a writer's brilliant wandering thoughts on the human condition - and especially his own - may prove enough compensation; Mr. Castle is extravagant in spending his talents of wit and invidious humor in this provocatively experimental novel in which everything happens in the mind. Still, others will insist that Mr. Castle's previous neglect is justified. (He wrote this novel in the mid-1960's.) Anticipation will become an addiction for a few and a throwaway for others, yet it will last. It is a presence one wants to have around, but its waywardness excludes it from mainstream literature. It has everything but a center; it is a magnificent sideshow. -- Martin Tucker, New York Times Books Review