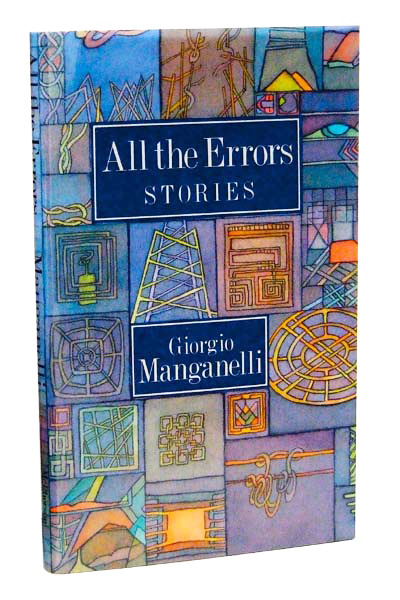 All the Errors (paperback)

​Translated from the Italian by Henry Martin.

For the clothbound edition, go here.

Voyage is at the heart of all narrative, and in the seven thoroughly original tales comprising this book the voyages are heightened into a condition of metaphysical urgency. One story is the valedictory address of a soul about to be born. Another tale tells of a labyrinth that seeks to describe its own pathways. Forming another, two monologues are interlaced, tracing the disavowals of love between a man and a woman. The principal characters of another story are Fires, Essences, Lights, Places, Edified Beasts, Centers, Thrones, Thunders, and Rings—and this cosmology of abstractions is brought into an almost palpable presence. In still another fable the narrator journeys on foot with an unknown itinerary, propelled through an unchanging landscape awash with deja vu. Far more than the sum of its parts, this challenging work was also Giorgio Manganelli's long-awaited English language debut. These are tales of solitude, yet touched with hope, and they share an allegiance to the themes of Sartre, Camus, Kafka, and Calvino.

Add to Cart
Also available fromL:
<
>
"All the Errors offers massive doses of that ineffable effect known as 'the pleasure of reading,' and the reader must be prepared to hold up his own end of the bargain, since the pleasure of reading is not to be separated from a certain measure of annoyance, disquietude, and even fear." — Corriere della Sera

"[Manganelli's] material is fragments of our consciousness and experience; he writes probing analyses of states of mind and relationships in showy, artful language." — Library Journal

"As in Beckett, there's also something a bit monstrous in Manganelli's meticulously dispassionate gaze. All the Errors is remarkable for the cold glint of Manganelli's eloquence and the surrealistic precision of his imagination." — New York Press

"[These stories] surprise us with their dreamlike quality, while being extrememly geometric, calculated, and systematic. ... But authentic narration emerges, almost inadvertently, from an uninterrupted verbal elegance, and one state of mind transforms into another as discourse again assumes the dimension of a genuine tale." — Giornale di Sicilia

"In Italy, Giorgio Manganelli was considered a national literary treasure. His quirkish wit, his elusive irony, his keen eye, his elegant style regularly won him praise.... Henry Martin has been able to capture and retain, in his English version, the singular qualities of Manganelli's prose. This volume will be prized for two reasons: for its intrinsic worth and seductive imagination, and for its introduction of an Italian master." — William Weaver [translator of Umberto Eco, Italo Calvino, etc.]

"Each of the seven stories is an exploration of the voyage we embark upon at birth. When an about-to-be-born child bids farewell to the life he has led in the womb ('Leave-taking'), birth is seen as an ending of life, for it begins the journey toward death -- but the child will not be exempted, as it wishes, 'from its task of existing.' In 'Lovers,' a man and a woman, in separate soliloquies, explore the ties that bind them. 'Travel Notes' and 'The Betrothal,' both superficially more conventional, are accounts of men who venture out on journeys, which begin unexceptionally: a hiker in the mountains seeks shelter for a night, and a bridegroom takes a walk around the town before the wedding. But both end in a surreal world, where time and the usual rules play no part. The narrator of 'The Self-awareness of the Labyrinth' ponders on the identity of the labyrinth in which he finds himself: it is both life in the abstract and his own creation. Perhaps the most abstract story is 'System,' in which essences of fire and water and other life forms are confounded by the reality of the Figure and the Non-figure, both intent on their game, and indifferent to all other forms. Reading at its most demanding and thought-provoking: Manganelli insists that we explore fundamental questions in the most rigorous and intellectually challenging way. There are no short cuts, but the effort has its rewards..." — Kirkus Reviews

"Admirably translated, All the Errors, in spite of not always proving to be easy reading, should nevertheless appeal to an elite of American readers who can enjoy solving complex allegories." — Edouard Roditi, World Literature Today

"There is a kind of compelling and hypnotic magic in his writing, but it is not of the dreamlike or the trancelike kind. The reader has to read. The reader has to think through, indeed, live through, sentences that seem to be as heavy as ancient, condensed stars. One might try a thousand ways to characterize the experiencing of Giorgio Manganelli; none of them will convey the pleasures of simply sitting down, an hour at a time, a day here and a day there, and reading him, a sentence, a paragraph, a page at a time.... Henry Martin's translation into English is a superlative one, and while being crystal clear it somehow conveys as well the strange plangency of its original." — Jascha Kessler, American Book Review
WIKIPEDIA ENTRY: https://en.wikipedia.org/wiki/Giorgio_Manganelli