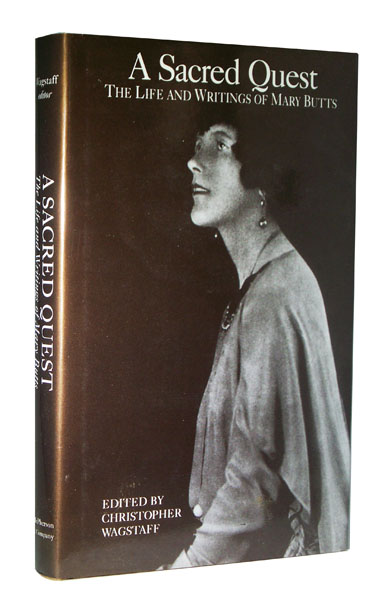 A Sacred Quest : Essays on the Life and Writings of Mary Butts

​She drank with Hemingway and prowled with Jean Cocteau, who did several portraits of her. She was courted by Virgil Thomson; counted H.D. and Djuna Barnes among her friends; was photographed by Man Ray. Virginia Woolf hated her perfume. Everyone noted her bright red hair. She experimented with drugs and explored "magick" with Aleister Crowley. Somehow, despite her mad life she found time to write; her stories appeared in Ford Madox Ford's Transatlantic Review and Ezra Pound's Little Review, and her first published novel was issued by Robert McAlmon's famous Contact Editions. Hailed at the time for their daring originality and stylistic panache, her novels, stories and poetry remained "lost" for fifty years after her premature death in 1937. Until we published Nathalie Blondel's fine biography (see Mary Butts: Scenes from the Life) accounts of Mary Butts appeared mainly in the memoirs of more famous contemporaries, including Evelyn Waugh, Harold Acton, Peggy Guggenheim and Elsa Lanchester.

​   Now that Mary Butts's writings are largely back in print after long neglect, Christopher Wagstaff's indispensible sourcebook, A Sacred Quest: The Life and Writings of Mary Butts, gathers essays from writers who knew Mary Butts and her work in the '20s and '30s, and from writers today who have reappraised her. There is a representative selection of Mary Butts's own poetry, fiction, journal entries, letters and literary criticism, as well as new interviews with Quentin Bell, Virgil Thomson, Hugh Ross Williamson and Eugene MacCown, along with up-to-date bibliographical information. Combining the personal dimensions of literary biography with original source materials and first-rate criticism, A Sacred Quest provides a valuable key to a major modern author whose importance is only now being understood in the history of Modernism, feminism and the avant-garde.

Add to Cart
Also available from:
<
>
"Mary Butts is one of a number of fascinating women writers from the period between the wars (Djuna Barnes, Olive Moore, Mina Loy) who underwent a period of neglect before being rediscovered -- usually by small presses like McPherson. A Sacred Quest is an excellent introduction to her work as well as an indispensable tool for future criticism. There are reminiscences from contemporaries of hers like Bryher, Glenway Wescott, Virgil Thomson, and Quentin Bell, reprints of the few essays that have been written about her, new essays by a half-dozen others, various pieces by Butts herself (including an interview), a chronology of her life, and a lengthy checklist of all of Butts's writings and reviews of her works. In addition, a number of photographs of Butts are reproduced throughout the book. This is independent publishing at its best." — The Review of Contemporary Fiction (16.1)
​
BRYHER: Recognition Not Farewell
GLENWAY WESCOTT: The First Book of Mary Butts
HUGH ROSS WILLIAMSON: Who is Mary Butts?
DAVID HOPE: Mary Butts, Fire-Bearer
LOUIS ADEANE: An Appriasal of Mary Butts
ROBERT DUNCAN: Re Mary Butts
ROBIN BLASER: 'Here Lies the Woodpecker Who Was Zeus'
ROBERT H. BYINGTON: Chronology

Christopher Wagstaff is a literary scholar, filmmaker and art curator. He scripted and co-directed the documentary film "Mary Baker Eddy: A Heart in Protest" (1988), with Julie Harris and Robert Duvall. He has curated exhibitions of the work of Jess, Harry Jacobus, and other painters, and edited Robert Duncan: Drawings and Decorated Books. Mr. Wagstaff lives in Berkeley, California.