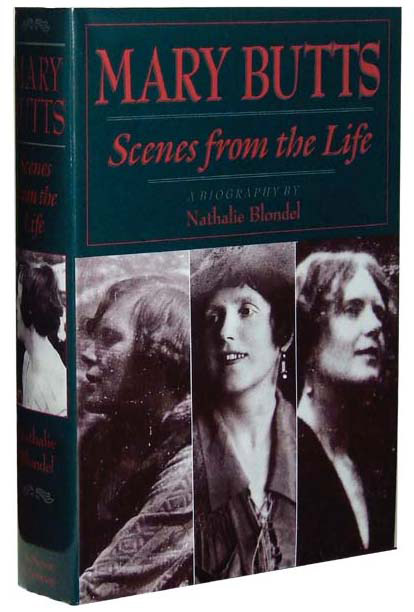 Mary Butts : Scenes from the Life

SKU: 1550
$35.00
$35.00
Unavailable
per item
A distinctive and original voice within the Modernist movement,the English novelist Mary Butts was a prodigy of style, learning and energy, who wrote with powerful insight about the Lost Generation. At the time of her premature death in 1937 her novels and stories had gained a formidable reputation, and were compared with Katherine Mansfield, D.H. Lawrence and T.S. Eliot. Her career was championed by Ezra Pound, Robert McAlmon, Ford Madox Ford, Charles Williams, and May Sinclair.
Her notorious lifestyle in London and France in the 1920s — smoking opium with Jean Cocteau, studying magic with Aleister Crowley, or throwing parties for Evelyn Waugh and Paul Robeson — overshadowed the importance of her work. The last decade, however, has seen a resurgence of interest in Mary Butts the writer, and her work has joined that of her contemporaries H.D., Djuna Barnes, and Mina Loy, for its centrality to literary Modernism. Since 1991, McPherson & Company has issued four uniform volumes of her writings (with more to come), a volume of critical essays, and now the first biography of this great lost Modernist.
Nathalie Blondel's superb biography will permanently alter the literary history of Modernism. It traces Mary Butts from her aristocratic childhood in Dorset, to her work campaigning for civil liberties in London during the First World War, on to her decadent period in France during the 1920s, and finally to her astonishingly productive last years in the west of Cornwall. Her important relationships are fully detailed, including her marriages, her close friendships with Ford Madox Ford, Jean Cocteau and Virgil Thomson, and her love affairs with Mireille Havet and Cecil Maitland. Her friends, enemies, and lovers (Eliot, Pound, H.D., Douglas Goldring, Wyndham Lewis, Roger Fry, E.M. Forster, Alec Waugh, Gertrude Stein, Elsa Lanchester, Quentin Bell, and many more) are allowed as far as possible to tell the story in their own words. This biography features many previously unpublished letters, photographs, passages of diaries and poems; and makes extensive use of Mary Butts's own remarkable journal, kept for the last 20 years of her life.

Clothbound, sewn, jacketed, 600 pages, 6.25 x 9.25", 1998, 0-929701-55-0
Add to Cart
You may also purchase from:
<
>
"Mary Butts (1890-1937), an English short story writer, novelist, poet, and essayist, was well known and respected among the British literati in the 1920s and 1930s yet remained largely unknown in the United States. Following her early death, her writings fell further into obscurity, but recently the publisher undertook an ongoing project to republish Butts's writings and encourage new works on Butts, including this impressive biography by British scholar Blondel. Using the wealth of resources left behind by the turbulent and enigmatic Butts — a memoir, a diary, notebooks, letters, and testimonials of relatives and famous acquaintances — Blondel both revives and celebrates Butts's achievements as a major contributor to Modernism. The research is exhaustive and meticulous and the subject matter fascinating. Blondel has crafted a scholarly yet very readable tribute to an important 20th-century writer who deserves renewed critical attention. Highly recommended for academic and larger public libraries." — Library Journal

"Mary Butts is, perhaps, the most obscure of major modern writers. Although she wrote wonderful fiction, she was also a brilliant critic admired by readers of The Dial, The Bookman and Time and Tide. . . . [Blondel's] biography is detailed, clear, forceful; it is, like Carolyn Burke's biography of [Mina] Loy, a revelation of an extraordinary artist." — The Review of Contemporary Fiction

"In the first biography to be written about Butts, Nathalie Blondel... makes a strong case for Butts's importance, not only to the Modernist movement earlier this century but to many of today's feminist and environmental concerns. She achieves this by underscoring Butts's utter devotion to writing all her life, even when she was carrying on more like a rock star than a serious artist. Drugs, lesbianism, alcohol, witchcraft —  she did it all but always in service of her craft. . . .Stella Bowen, Ford Madox Ford's lover, once described Butts as inhabiting a 'cloud-cuckoo land of her own,' a view Blondel occasionally agrees with, but there is no condescension from her toward Butts's varied beliefs. Her respect for Butts as a writer dominates all, a refreshing attitude at a time when many biographers seem bent on humiliating their subjects. Anyone interested in the literary life of the 1920s will be fascinated by this book." — Washington Post Book World

"This first complete biography of Mary Butts is timely and important. . . . Though Blondel reveals much about Butts in these pages, the artist remains something of an enigma. As one of her close friends said of her after her death, "Mary had her secrets from us all, and to seek to lay bare her whole personality is to find she has a way of escaping us a little." But while Butts has kept some secrets even from her biographer, this well-researched book will undoubtedly renew interest in this most elusive writer." — The Boston Book Review

"Literary biographies are among the scholar's most useful tools, and when they are as well done as Blondel's they are particularly valuable. First, Blondel's delineation of Butts's central role among the English modernists undermines the myth of male domination among the non-Bloomsbury modernists and reveals the importance of this unjustly neglected figure. Second, Blondel... incorporates valuable critical analysis of many of Butts's writings, an element often missing from literary biographies....Blondel has filled a major gap in modernist scholarship." — Choice: Current Reviews for Academic Libraries

"For decades Mary Butts has been the object of a small but fervent cult, its size limited by the extreme rarity of her books of short stories and her novels. Recently some of these have been reprinted in her native England and in America, confirming her status as a superbly original writer, on a par with such brilliant eccentrics as Djuna Barnes and Jane Bowles. Now at last we have her biography, based on the extensive diaries which she considered her most important work and which have never been published at all. Her wildly unconventional life, especially in 1920s Paris where she "knew everybody" from Jean Cocteau, with whom she smoked opium, to Virgil Thomson (who is said to have proposed marriage), to Gertrude Stein (about whom she wrote a satirical short story) would make this book a fascinating cultural history in any case. But as the introduction and perhaps the key to the work of a great unknown writer, it becomes absolutely essential." — John Ashbery

"With Blondel's in-depth biography and four volumes of her work in print, Mary Butts is no longer a forgotten original. Now she is a well-documented, fully visible, erratic, and marvelous writer; she is also an ambitious and unusual thinker whose desires and ideals guided her form the remote coast of England, to London and Paris, and then, in her mind, to ancient Greece and Egypt. While occasionally her style may sacrifice shimmer for economy, and her stories at times idealize the mysterious, yher work is always compelling enough, and back by enough passionate thinking, to warrant this 're-discovery' and to open a new door into early Modernism." — Carolyn Kuebler, Rain Taxi

"Blondel has written a skillful and discerning account of Butts, one which stays firmly focused on the works and their evolution. The bibliography alone would make it a significant scholarly achievement, and the generous quotations from Butts's diaries infuse it with an atmosphere by turns whimsical and brooding, flip and ruminative. ...Within a decade Armed with Madness will assume its rightful place within the canon of Modernist prose. Butts does not have the stature of Virginia Woolf -- her achievement was not as sustained or her influence so wide-reaching -- but she left one work of indubitably major status, and several others of real distinction." — London Review of Books

"Between the world wars, Mary Butts wrote several esteemed works that influenced and reflected the preferences of the age, including historical fiction and contemporary novels, memoir, short stories, and criticism. To better understand her 'progress and achievements,' British writer [Nathalie] Blondel, in her first biography, takes a chronological approach and makes liberal use of Butts's diaries, which provide a centerpiece for this narrative. Revealing even more than Butts's artistic development, the chronology provides a fine composite view of a talented, manipulative, self-involved, complicated woman." — Kirkus Reviews