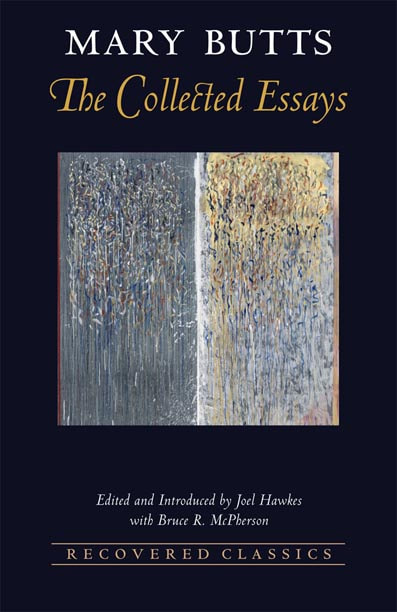 The Collected Essays of Mary Butts

Edited and introduced by Joel Hawkes

The Collected Essays is the latest addition to an ongoing project of bringing almost all of Mary Butts's writings into print, and follows our well-received release of The Complete Stories in 2014,

The eleven essays and 117 literary reviews gathered in this new book were mostly written by Butts between 1932 and 1937, the most productive period of her foreshortened literary career. The range, variety, and depth of subjects is little short of remarkable, ranging from classical history and literature to popular fiction (historical, mystery, ghost stories), from modern history (French and English) to Eastern religion, and from the American Depression to gardening. She wrote first for The Bookman, essentially a trade journal, but soon was engaged to write reviews and essays for prominent journals and newspapers — The Sunday Times, The Daily Telegraph, The Spectator, The Manchester Guardian, The London Mercury, Time and Tide, Week-End Review, John O’London Weekly, The Adelphi, Everyman, and even Crime. Moreover, “reviews” is a misnomer for most of Butts’s shorter pieces, since her approach is conversational and opinionated, and sprinkled with interesting asides. Following her death a eulogistic note in Time and Tide read: “[though] her natural abundance sometimes made her a misleading guide to other people’s intentions, the depth of her knowledge and the essential truth of her vision gave a special value to her judgments even when she appeared to be going off at an unlikely tangent. She touched nothing that she did not in some way enrich.”

"The collection sings when Butts's life peeks through, as when she recounts an experience that led her, as a child, to learn "what a short story could be." Literature lovers will find much to consider in this varied collection."--Publishers Weekly

A distinctive and original voice within the Modernism movement, the English novelist Mary Butts was a prodigy of style, learning, and energy who wrote with powerful insight about the Lost Generation. She was born in 1890 in Dorset, England, a great-granddaughter of Sir Thomas Butts, William Blake's patron. By the time of her premature death in 1937, her work had gained a formidable reputation. Hailed for their brave originality and stylistic panache, her many stories, novels, and poems were mentioned in comparison with Katherine Mansfield, D.H. Lawrence, and T.S. Eliot. Her career was championed variously by Ezra Pound, Robert McAlmon, Ford Madox Ford, Charles Williams, Evelyn Waugh and May Sinclair. Her flamboyant lifestyle in London and France in the 1920s unfortunately overshadowed the importance of her work. Over the last several decades, however, there has been a resurgence of interest in Mary Butts the writer, and, after being "lost" for more than 50 years, her work has joined her contemporaries H.D., Djuna Barnes, Virginia Woolf, and Mina Loy, in the pantheon of literary Modernism.

Joel Hawkes is an English scholar of Modernism and teaches in Canada at the University of Victoria, BC. His research is particularly concerned with the physical, cultural and imaginative spaces we create and inhabit, and their ritual nature. He is also the editor of a volume of essays titled Mary Butts: Conflicts, Contradictions, and Feminist Reconstructions, which is forthcoming in 2022 from Bloomsbury Press.