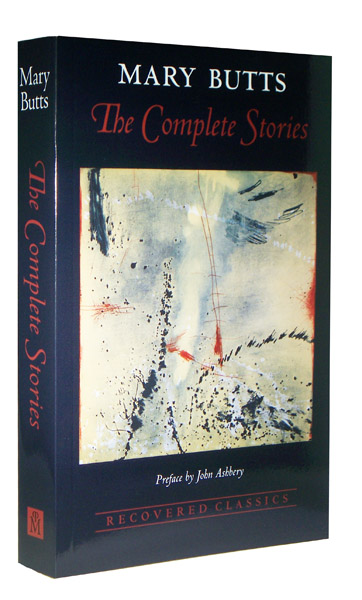 The Complete Stories of Mary Butts

​Winner of the 2017 Independent Press Award for Short Stories

The short stories of Mary Butts (1890-1937) possess an intriguing relation to the present moment. They both embody their time—the Lost Generation during the ’20s and ’30s—and possess a stylistic freshness and intellectual breadth that feels very akin to our present day. As John Ashbery remarks in his preface, “After reading Butts one is left with an impression of dazzle, of magic, but what made it is hard to pin down...One keeps getting the feeling that these stories were written yesterday.” Now, for the first time in a single volume, all three of her story collections have been gathered, and seven uncollected stories have been added (including two pieces never before published). The power of hidden things and things of hidden power preoccupy these distinctive tales of love and betrayal, magic and mummery, belief and folly. Here, in the realm of active imagination, the veil between natural and supernatural may be rent apart in an instant, and just as quickly restored. The novelist and poet Glenway Wescott declared Mary Butts’s first collection of stories, Speed the Plough, “the announcement of a new intellect, acute and passionate, to scrutinize experience with an unfamiliar penetration,” which he then compared epochally with James Joyce’s Dubliners. Marianne Moore, Evelyn Waugh, HD, Ezra Pound, Ford Madox Ford, and Virgil Thomson all championed her work, and during her tragically brief lifetime Mary Butts’s reputation rivaled Katherine Mansfield’s and Virginia Woolf’s. Her style is swift, elliptical and emotionally charged, exactly matched to the free-wheeling lives of her characters in Paris and London during an explosive era.

To read a sample of the text, see the link below.

Add to Cart
Also available from:
<
>
"One of the last but most welcome publications of 2014 is The Complete Stories of Mary Butts, issued by McPherson on 15 December. After a long time in the literary shadows, Mary Butts' work has seen a revival in recent decades, with reprints of her novels and the first publication of her journal, and several critical studies. This year alone has also seen Mary Butts and British Neo-Romanticism: The Enchantment of Place by Andrew Radford and A Fractured Landscape of Modernity: Culture and Conflict in the Isle of Purbeck by James Wilkes, in which she features strongly.
"As I said in my essay in Sacrum Regnum 1 ("Inner Bohemia - The Mystical Fiction of Mary Butts"): "Mary Butts is sometimes invoked as an associate of Aleister Crowley and Jean Cocteau, and as part of the wild Parisian-bohemian “Lost Generation” set of the interwar years, with a story and a life fuelled by drink, drugs, sex and the occult. But she was much more than this picturesque figure. She was an avant-garde, modernist writer whose work was yet also infused with a deep sense of tradition and of the past. She was an enthusiast of the work of M. R. James, championing him in an essay for the London Mercury, one of the first critical appreciations of his work. And she was also an admirer of the mystical fiction of Machen, E.F. Benson, and de la Mare. Most of all, her own work succeeded in uniting these two strands, the modernist and the mystical, with a force only otherwise seen in such achievements as Eliot’s The Waste Land, the alchemical poems of ‘H.D.’, or Malcolm Lowry’s work."
"I commented: "some critics consider her real forte was the short story, and her piece “Mappa Mundi” has been particularly praised for the way it mingles inner and outer worlds, the streets of Paris becoming also a terrain of hidden dimensions: it recalls her own genuine experiences. Her characters struggle to explain it: “An extraordinary, a unique sense of all sorts of mixed pasts, a sense of the ancient city and all the fury of life that went to make it…that and something else. Like something out of which they all came. A matrix, which is Paris and the secret of Paris.” This sense of overlapping realities was not only known in London and Paris, but in Dorset, in Cornwall, in the country: the implication is that it might be encountered anywhere."
"This edition of her complete stories should at last see Mary Butts take her place as one of the most original, thoughtful and innovative writers of supernatural fiction in English in the 20th century." — Mark Valentine, Wormwoodiana

"As John Ashbery writes in his preface to this comprehensive volume of short fiction by British modernist Butts, known for her elliptical dialogue, quick-cutting scenes, and deviant characters: 'One keeps getting the feeling that these stories were written yesterday.' The three collections (1923's Speed the Plough, 1932's Several Occasions, and 1938's Last Stories), as well as some uncollected stories being published for the first time, gathered here exemplify the way Butts brought her keenly prescient style and perspective to the great themes of her time and class: upper-crust types who take on moral charity cases, dinner parties gone awry, vague breaches of etiquette, women's burgeoning sensuality and power, and the paranormal. Some of Butts's most accessible stories are charming, straightforward country-house murder mysteries ('In Bloomsbury') and atmospheric ghost tales ('Look Homeward, Angel'; 'With and Without Buttons'), but her cast of wealthy and down-and-out Londoners, Parisians, and Americans entertain as they navigate intricate domestic and social concerns, too. Relationships and even lives hang in the balance over, for instance, an abrupt knock at the door ('The House Party,' dedicated to Jean Cocteau) or the botched delivery of an invitation to cocktails ('The Warning'). Throughout, Butts draws the eye to details both grimy and glittering—city streets that 'gleamed like stale fish,' a woman's reflection 'like a child that has been dipped in dew.' And then there are her indelible descriptions of Paris, where, as she writes in 'The Master's Last Dancing,' which ran in The New Yorker in 1998, 'everything happens.' This hefty volume substantiates Butts as an essential observer of fetes and failures who merits reading alongside her better-known contemporaries." — Publishers Weekly

"Critique: Mary Francis Butts (13 December 1890 - 5 March 1937) was a British modernist writer. Her work found recognition in literary magazines such as The Bookman and The Little Review, as well as from fellow modernists, T. S. Eliot, H.D. and Bryher. After her death, her works fell into obscurity until they began to be republished in the 1980s. McPherson & Company is to be congratulated and thanked for making the short stories of Mary Butts available to a new and appreciative generation of readers in this outstanding anthology of her work. Simply stated, "The Complete Stories" is very highly recommended for personal reading lists, as well as both community and academic library Literary Studies collections."--The Midwest Book Review
Click to download the opening pages of the book.