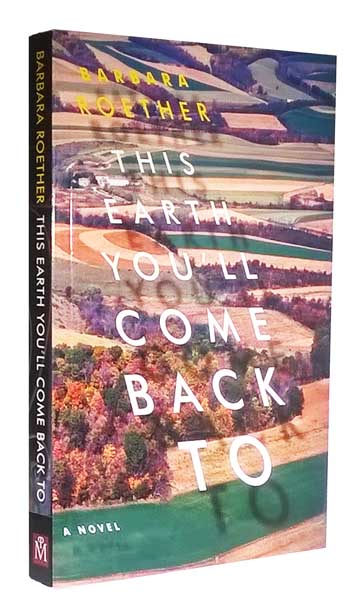 This Earth You'll Come Back To

Finalist: 2015 Foreword Book of the Year Award for Literary Fiction

“From her afterlife a newly dead mother watches her restless wandering daughter arriving, late as usual, at the cemetery. Skeptic, forgiving, loving, the mother tells us the girl’s story, about her wanderings and the whole family from which she wandered. This is an astonishing narrative feat—a self-portrait through the eyes of the Other, the Mother. Through her unforgettable debut novel, Roether sustains a luminous and compassionate embrace of how we fail, and fail each other, and life still goes richly on.” — Robert Kelly

Rose Healy of Blanchardville, Ohio, child bootlegger, WWII veteran, devoted reader of Tolstoy, and heroic mother of ten, had the nerve to die before her youngest daughter could get home. Which, as Rose would say, was her own damn fault. Yet, when Stephanie returns after the funeral, restless and plagued by the same unease that drove her away thirty years earlier, she discovers that death is no object when two women need to talk. And Rose is talking, speaking out the secrets buried for generations in the heart of the heartland: what a mother will do to feed her children, who will protect them when she cannot, why Stephanie left home thirty years before, and what part of herself she left behind. Rose’s penetrating wisdom and resilient spirit guide this journey through the inward and outward struggles of a working class family as they move from the rich promise of Ohio farmland in 1850 to the rustbelt ruins of 2005. A Faulknerian novel for the Midwest, This Earth You’ll Come Back To captures the unpretentious colloquial voice of the region while exposing an archetypal story of startling sophistication. Tragic, triumphant, and wholly original, this story introduces a new breed of literary heroes.

For eBooks of this title, go here

To read an excerpt, go to the link below.

A brilliant review essay in Dactyl Reviews by Lindsay Hill
FOREWORD REVIEWS:
"This Earth You’ll Come Back To, by Barbara Roether, is a singular, profoundly moving debut novel narrated by Rose Healy Koehner, a Midwestern wife and mother of ten who recounts her life and times to her daughter Stephanie. There is a unique twist to Rose’s tale telling: she does it from the grave while Stephanie stands at her graveside. Rest assured, though, there’s nothing supernatural or ghoulish about Roether’s narrative. It is an elegant rumination on memory, family, contrition, connectedness, and the ways in which geography and landscape—indeed, the place we call home—informs our self-perception.
The novel opens with Rose chastising Stephanie for roaming around the cemetery looking for Rose’s headstone in the heat of a hot July afternoon in Blanchardville, Ohio. Bitter and disapproving, Rose does not make a good first impression on readers. Then her tone shifts. She philosophizes about love. She addresses Stephanie as “dear daughter.” She tells her that she was the easiest of her children to love. And she begins her chronology, recollecting the histories of her Irish and German relatives and their journeys to America, her difficult marriage to an alcoholic, her imperfect mothering, her childhood, and her understanding of Stephanie’s innate need to pursue being far from home, wandering somewhere, always elsewhere.
Structured thematically by chapter titles such as “Origins,” “Marriage,” “Maladies,” and “Departures,” Rose’s memory talk revolves around those subjects, yet the progression of her storytelling never feels confined by them. Rose is the consummate raconteur; she expresses one compelling insight after another and can state the obvious and the sublime with ease. Well-read and perceptive, Rose references literature and characters from novels to emphasize her point. And as a mother of ten, her wisdom about children and motherhood is indelible. There’s no action in Roether’s novel; there’s only Rose’s voice. Roether uses foreshadowing and a colloquial stream-of-consciousness writing style to pull readers into Rose’s melancholic and confessional recitations. Roether has crafted a haunting, complete, and triumphant novel from one character’s perspective. It is a stellar and distinctive achievement." Amy O'Loughlin (Winter 2016)
-------------------------------------------------------------------

PUBLISHERS WEEKLY:
"This sensitive and memorable novel from Roether employs a dead narrator, Rose Healy Koehner, who recounts her eventful life story in fragmented fashion to her youngest daughter, Stephanie. After returning to her hometown of Blanchardville, Ohio, in 2008, middle-aged Stephanie, who lives in San Francisco with her husband, Mark, and son, Whitman, visits Rose's gravesite and is surprised to be addressed by her mother. In her crusty, outspoken, and sometimes humorous voice, Rose describes the daunting challenges of raising 10 children in near poverty with her mostly drunken husband, Rusty. The most compelling parts of Rose's personal chronicle emerge as she paints the complex portrait of the turbulent but always loving relationship she had with her daughter. Stephanie was sexually assaulted at age 14 by a mentally unstable family member, an event that left permanent emotional scars; Stephanie ran away from home, had abortions, and roamed the world in search of happiness and self-fulfillment. Rose's ghost admits, albeit much too late, her inadequacy to assist in Stephanie's recovery from the trauma. She also divulges her lifelong joy in books and recalls her visit to Stephanie while the latter was living as a hippie in Oregon. As Rose winds up her inspiring beyond-the-grave saga, Roether shows how mother and daughter kept their bonds strong despite the distances, emotional and geographic, that too often separated them."