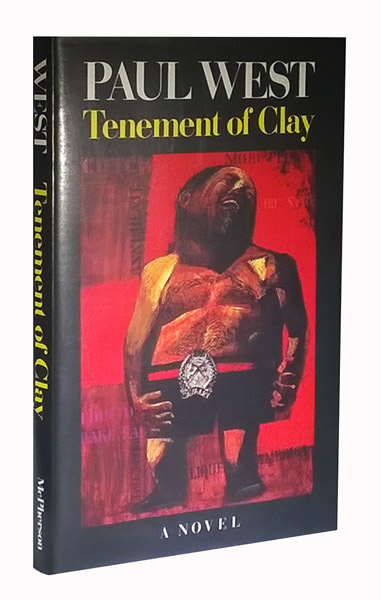 SKU: 1283
$12.00
$12.00
Unavailable
per item
"Parts of it recall Beckett, and parts The Tin Drum; the prose is densely American. It's an exciting book that promises in its opening pages to treat and hold on to the subject of the modern human condition. . . . The size of the attempt is remarkable and impressive. Its characters are essentially grotesques — Pee Wee Lazarus, the dwarf wrestler; Lacland, the bum found at the entrance to the subway station, emerged from some primeval darkness, without speech or aim; and Papa Nick, who attempts to organize their lives. . . ." —  Malcolm Bradbury, Punch

​Slums of the American city of New Babylon provide an all-too-real setting for this prescient novel of homelessness, noble intentions, moral corruption, and social castoffs. Tenement of Clay tells of Papa Nick, a dwarf wrestler named Lazarus, and a derelict called Lacland. Originally published in England in 1965, this is the first U.S. publication of what is essentially West's first novel (though technically his second). In its language and moral complexity it heralds all of the dark but major themes of his later, award-winning novels.

​"Through it all, West is admirably evenhanded and non-judgmental. There are no heroes and villains; he delights in each character's existence. This is one of West's great gifts, to appreciate life for the vast, complex spectacle that it is, and to convey his impressions in language so memorable, so accurate, that the reader sees the circus almost as clearly as the author." — Harvey Pekar, The Bay Guardian

​Paperback, jacketed, 216 pages, 5.5 x 8.5", 1993, 0-929701-28-3
Add to Cart
<
>
"It is a tremendous theme, frightening in its examination of the evil flowing from good intentions, and exhilarating in the rich and often pungent mixture of its characters, as they warily circle one another shielding their private worlds. A very fine novel." —  Books & Bookmen

"The meaning of the book lies in its exploration of the slow spiritual deaths of Papa Nick and Lacland. In failing to bring Lackland to life, Papa Nick is himself touched by the cold hand of death. Why has he died? The answer, of course, is as long as the book and as complex as the doomed society in which he lives." — Times Literary Supplement

"The characters who dominate this unusual and most impressive novel . . . live in the memory long after the creature in the crate has been shrugged off as a useful pretext." — Daily Telegraph

"One finishes the book impressed by West's verbal skill and horrified by the predicament of all his characters." — Francis King, Sunday Telegraph

"West makes use of a protean metaphorical style that is Elizabethan in its energy. The brio of this prose carries us through a world akin to Melville's 'Bartleby,' a world where harm is the norm. In his first major imaginative sortie, West sets out the themes that will mature into such works as The Women of Whitechapel and Love's Mansion." — The Bookpress

"What makes [Tenement of Clay] remarkable is the delicate balance he strikes between the joy of language and the pain of existence, a balance in which the life of the mind can rise and soar above homelessness, hate and death." — New York Times Book Review