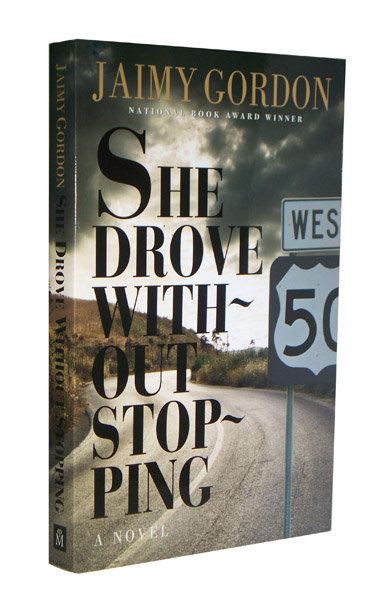 She Drove Without Stopping

SKU: 1364
$15.00
$15.00
Unavailable
per item
"This may be the novel that women have been trying to write for the last thirty years... [She Drove Without Stopping] offers a wider variety of pleasures than just about any so-called 'women's' classic one can think of. This is a feminist monster from the id: omnivorous, roaring and wildly colorful." — John Domini, American Book Review

Jaimy Gordon's second novel, ten years in the making, is a further triumph of exuberant storytelling from the National Book Award-winning author of Lord of Misrule. Perhaps the ultimate woman's road novel, She Drove Without Stopping presents young Jane Turner's cross-country journey toward self-possession. As she refuses to turn back from a terrain we all know is dangerous to women, her wit wrestles with the violence she encounters on a risky odyssey. She Drove Without Stopping is a lusty and forthright novel. Jaimy Gordon, whose earlier books have earned her reputation as a brilliant stylist, here tells the story of a very young, very bold American woman deciding what she wants. In Jane Turner she has created a character so fresh, so self-consumed and self-righteous, that she reveals secrets of a special and particularly American woman.

"Jane Turner, carfare in her palm and defiance in her heart, is one of the ablest heroines ever to track the American landscape." — Jayne Anne Phillips

"Gordon writes like a woman with a gun to her head. She crowds her paragraphs with startling outsize metaphors that perfectly encapsulate the wild coming-of-age of 21-year-old Jane, an aspiring adventuress. . . . The vigorousness of its writing style, the way complex themes snake through one chapter after another, the sheer virtue of the lowlife heroes who pop up throughout -- all will convince readers to hitch a ride with Jane. It's well worth the trip." — ALA Booklist

"The book is a brave and miraculous piece of fiction, written with verve, guts and power from beginning to end. Let's not forget humor, anger and rebelliousness either....She Drove Without Stopping is a picaresque novel, one that follows the life of its hero, Jane Turner (a stand-in for the author?) over the course of a fifteen-year period. . . .The book turns into a road novel for a while — metaphorically Jane goes deeper and deeper into the beautiful but tainted USA. Journey's end is Los Angeles and its underbelly — Jane is always drawn to the lower depths, especially the odd, raffish characters who frequent it. There, among her fellow-dropouts, she finds a measure of happiness and perhaps even redemption. Gordon is an American Celine, a writer who is able to find humanity in all the wrong places." — Willard Manus, What's Up, and Lively-Arts.com

"Gordon's prose is witty and stylish, the kind of unblinking writing that isn't afraid to admit of a woman whooping it up all night, then waking next morning, disgusted and not a little elated to discover just how close to the edge she's crawled. Readers up to following Jane on her hell-bent journey are in for quite a trip." — Washington Post Book World

"I don't believe that there is any protagonist in contemporary fiction quite like Jane... She Drove Without Stopping is a wondrous and important book." — John Hawkes

"The novel's greatest strength is the distinctive narrative voice adopted by Gordon, whose third-person narrative maintains a dry, gravely, witty tone, no matter how shocking the events being recounted. . . . The overall effect is of an older, experienced intelligence looking back on her younger self, ordering the events of her adventurous past with rueful good humor and an appealing lack of rancor." — Chicago Tribune