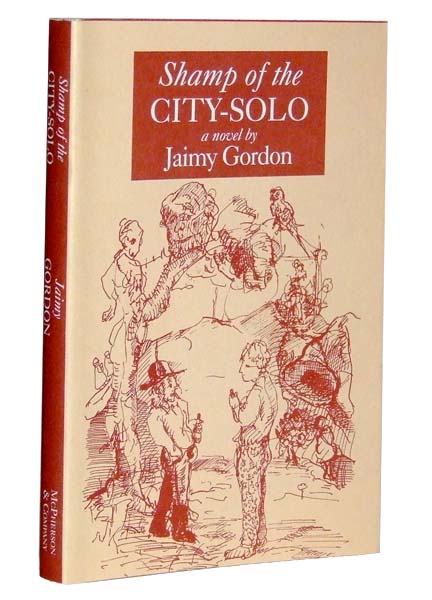 SKU: 1348
$12.00
$12.00
Unavailable
per item
"To say Ms. Gordon is fertile with metaphor is to only hint at her abilities; examples burst with prolific abandon from every page... Gordon's novel remains foremost a comic triumph." — Aspect

Here is one of the finest comic novels to appear in the last half century, deserving comparison with that of the best of Flann O'Brien, Angela Carter, or Witold Gombrowicz. Shamp of the City-Solo is also the cornerstone of this publishing house, first appearing in 1974 under Bruce McPherson's first imprint, Treacle Press. It very quickly became an underground sensation.This "fantasy novel" occurs in what may be thought of as a dystopian parallel-universe, a world recognizable to ours but set in an odd remove where the hero's hunger for fame shows its mythic origin. Hughbury Shamp is the reluctant teen-age hero who becomes apprenticed to three "masters" at the West Poolesville Depot on the Sumpsky Prospect, across the River Sump from Big Yolk, the City-Solo. His education involves a series of preposterous and hilarious misadventures with the likes of the impresario Sergei Shipoff, Dr. Harry Analarge, and the World Friar Tapsvine, all the while he is being propelled toward stardom as prize-winning speaker at the murderously competitive Arslevering Ox-Roast.

Paperback, 200 pages, 5.5 x 8.5", 1993, 0-929701-34-8
Revised 3rd edition w/ author afterword.
​For a clothbound edition (2nd), go here.
​
Add to Cart
Also available from:
<
>
"Style is what matters most here...but the clear and simple lines of the plot reinforce and emphasize the style...Even at its most visual, Jaimy Gordon's style goes beyond, or beside, the visual and achieves its most remarkable tones, not so much in our mind's eye, as where the intellect dances among words...I think it gloriously funny. I think it also wise, both under and on the surface -- after four or five times through it I begin to suspect it may be inexhaustible." — Keith Waldrop, Margins

"Something new in the great free-wheeling tradition of Petronius, Rabelais, Swift. Fantasy and good sense blended in a laughing satire on the state of the arts today, with as outrageous a cast of rascals as ever lied the truth. . . I like it immensely." — Hayden Carruth

"When I first read this novel I thought it far ahead of most new writing. I feel the same upon a later reading. I'm struck by its originality, its loving cynicism, its irony, its poetic force." — William Goyen

"Certainly one of the most impressive and inventive novels to appear in several decades." — Boston Globe

"One afternoon late in September of 2036 Boz and his nephew Mickey were browsing in the Strand.
'Oh look,' said Mickey, 'here's that book you were telling me about, Shamp of the City-Solo.'
'Buy it,' said Boz.
Mickey read the blurbs on the back cover and frowned. 'It seems too kind of . . . um, intellectual for me.'
'Not at all,' said Boz in his most authoritative manner. 'It's certainly not a book for nincompoops, and you won't enjoy it unless you have a feeling for language. But that's only to say it's a good novel.'
'"An Underground Classic," it says on the cover,' Mickey observed, still indecisive.
'Never mind what they say on the cover. It's fun and it's beautiful. Your mother loved it when she was your age. You really ought to read it.'
'Well, if you say so,' said Mickey.
'I do,' said Boz."
— Tom Disch
Keith Waldrop brilliantly describes the book in an essay in Context in this way:

Shamp of the City-Solo takes place in a sort of alternate or parallel world, familiar but unplaceable.
Hughbury Shamp, a teenager with a yen for fame . . . follows three masters whom he introduces at the beginning of his first-person account, an echo of Marcus Aurelius starting his Meditations. Someday a scholar will track down the echoes and allusions in Shamp, classical, biblical, historical, casual—more, I’m sure, than in The Waste Land. She has admitted to being, at that time, deeply into seventeenth-century writers like Browne and Aubrey, as well as Urquhart’s Rabelais and Burton’s Thousand and One Nights. One may suspect she dipped also into the earlier melancholy Burton and Euphues and even the often despised Sartor Resartus. In other words, with Shamp she joins the tradition of English prose analogous to what poets called "strong lines" as opposed to "plain style." This puts her at odds with most contemporary novelists, but leaning towards someone like Djuna Barnes or the Gaddis of The Recognitions.
Shamp takes place in Big Yolk, which sounds like New York, but is really a mindscape. There is a deserted subway and a "Sump" whose first description is typical:
"Beyond us the Sump rolled mosquito-flecked in its trench. Behind lay a long stretch of acid pine barren, creased with superhighway, pocked with gas station. Lest they fall upon it, swarms of raindrops clung tremulously to the air."
Here Shamp’s first master Shipoff builds a depot and lays plans to take over Big Yolk, the "city solo." Everything in the book is somehow just not quite what one knows, and yet recognizable. Shamp swears, for instance, "by Chrust!"—and, strangely enough, it sounds right.
The fame that Shamp is after can only be got by a display of rhetoric, by soloing at the city-solo. This, after many vicissitudes, he does, thus outdoing his three masters, and is rewarded with a hotel in his honor. As in each of Jaimy Gordon’s three novels, there is at the end a surprising success and a continuing hunger. Shamp refuses to move into the hotel he is offered, but lives in the deserted subway, claiming "one real pleasure, and that is my joy to be quit of whatever, to have nothing but my hole and the meadow [which he can see] at the far end." He addresses the hotel itself: "You are my fame. I am your vacancy."