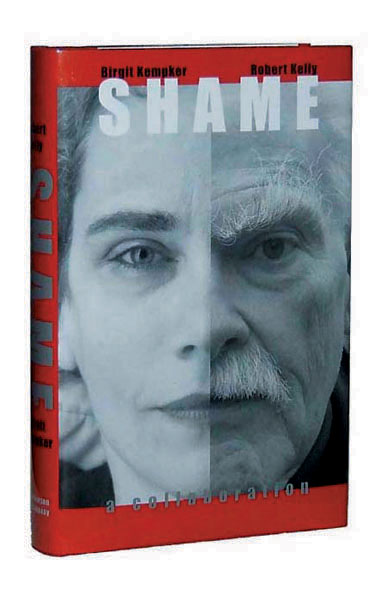 SKU: 0771
$35.00
$35.00
Unavailable
per item
"Shame is a radical text of the 'third mind' collaborative genre, multivalent and operational. What is our shame? What is our ambivalence of imagination, confession, sexuality, history? Who takes responsibility, who notices, apologizes or hides? Kelly and Kempker's bilingually enfolded meditation revolves, pivots, torques, litanizes in stunning American German language space. These poets face the shameful world before them (gegenüber / literally 'facing opposite') with passion, erudition, brilliance. There's nothing like this stretching out there. 'Haut plappert' / 'Skin chatters'. 'Shame is waiting.' " — Anne Waldman

McPherson & Company takes special pleasure in presenting a limited edition of 400 signed and numbered copies of a collaboration between Robert Kelly and Birgit Kempker. This unique edition is presented by special arrangement with Urs Engeler Editor of Basel, Switzerland. Shame is a bi-lingual text in prose and poetry that defies categorization. It is a psychological exposé, a purloined correspondence, an investigatory improvisation, an apologia, a desideratum, a profundity, and jazz.

Moreover, it is an experiment in cross translation.

Above all, Shame is a collaboration. When Birgit Kempker — a younger German writer living in Basel — invited Kelly to create a work together, neither knew the other except by reputation. They proceeded, over the course of two years, to communicate by e-mail through sixteen exchanges, and the subject was shame, shame at its most personal and prosaic and intimate, sometimes even fetching, and at its most generic and couched and poetic and hallucinatory.

The barrier between them was not simply that of not knowing one another while risking the limits of naked trust, but of surmounting age, gender, nationality and language. Birgit Kempker wrote in German, and Robert Kelly in English. Shame is a love story. A story of two tongues.

But Shame is not a story of love lost and love newly found or love claimed and love rebuked. Shame is a book spoken between two lovers who will never be lovers, a book of the unabashed and prised apart secret intimacy that can be laid bare against all constraint by ghostly lovers — virtual, exemplarly, psychic guides to one another . . . and the rest of us.

​A Collaboration by Robert Kelly & Birgit Kempker
Clothbound, sewn, jacketed, 240 pages, 4.75 x 7.25", 2005, 0-929710-77-1
Add to Cart
<
>
..."[W]hat may be the most original – and deeply fascinating – text in Kelly’s quartet [of recent publications] is a long prose collaboration with the German-born Swiss poet Birgit Kempker, called Shame.... Kempker is 21 years Kelly’s junior, so that the project engages not just language, gender & geography but generations (or perhaps, in scare quotes, 'history') as well. This book ranks with Lyn Hejinian & Leslie Scalapino’s Sight, as one of the most ambitious & fully realized collaborative poems ever written. The text is 118 pages long, presumably with Kempker & Kelly alternating passages, Kempker writing in German peppered with English, Kelly writing in English peppered with German. Those are the right-hand pages of the book. On the left are translations of these passages, English into German & vice versa so that the total book comes in at around 240 pages. The 'salted' passages of English in the German texts (und vice versa) are left in their original tongue in these translations, but positioned in italics. Actually, it’s more complicated that this, in that both poets felt permitted to respond in the midst of their translations and these are also included, in italics & bracketed by slash marks. ...The tone of this project is extraordinary – abashed & shame-faced, guilty & perpetually self-flagellating, a work of extraordinary masochism – and a text as erotic in its own way as any of the novels of Kathy Acker’s. This, you might point out to M.L. Rosenthal were he still alive, is really what confessionalism means." -- Ron Silliman, http://ronsilliman.blogspot.com/

"After reading Shame/Scham I felt compelled to augment the publisher's statement, 'Above all, Shame/Scham is a collaboration.' True, but its ambitious and complex realization...is so much more. Through the synaptic-like prose passages, one has the pleasure of witnessing the commencement, development and fruition of a dialectic marriage between two bodies of language. ...The collaboration/relationship of Shame/Scham begins as many do, one person nervously sounding the other, attempting to anticipate his/her responses, feelings and/or opinions, the other answering similarly...."Kempker writes, 'Reading means" to make room for fear', to which Kelly responds by asking 'Aren't we ashamed, also ashamed, to have feelings?'...After establishing many of the motifs of the book, both Kempker and Kelly lengthen their responses as they grow more comfortable in each other's company and begin to confront their differences. The rhythm of the prose accelerates, as the pace of feelings demands an equally paced response. The subjects revolve around revelation (historical, religious, sexual, psychologically, imaginative), violence and shame, and the textual resistance to the reader strengthens.... Through the previous groundwork formed by the meditations on shame's embodiment within the individual, the authors are able to confront the disparity of their own sexual politics through the filter of Rilke. From these moments, the authors realize their final stage of relation, the acceptance and embrace of each other's subjectivity....--James Belflower, First Intensity (#21, 2006)

"Shame shapes," says Kelly to Kempker and vice versa, as they take turns shaping shame. They keep sliding into each other's sounds, images, associations--as the shape-shifting beast melds two authors, two languages. One tongue ceases to feel a foreign one, after Robert and Birgit persuade us, through their provocative projections, that shame in all its permutations is in fact our common native tongue. -- Mary Caponegro

From Joshua Corey's blog [Cahiers de Corey] on Shame:
In spite of a cold, made it out here yesterday and immediately took a 6 train downton to see the Elizabeth Robinson / Robert Kelly reading at the Bowery Poetry Club. . . .The ventilation system rattled like ice in glasses throughout Elizabeth's measured, witty, and quietly charismatic reading. ¶ Robert Kelly was something else again. With his leonine appearance, deep and velvety voice, and the legacy of a lifetime of poetry behind him, he cut an extraordinarily impressive and yet charming figure. He makes a life in poetry look like the only life to live. A compelling reader who persuaded me as I've rarely been persuaded that I was in the presence of a genuine visionary, almost a Blake — a Great Poet. He began with a remarkable poem about Moses as stutterer from his new book Lapis that made me want to go out and buy it immediately. But I was blown away by the selections he read from another new book . . . : a book-length collaboration with the German poet Birgit Kempker called Shame . . . . Apparently they wrote the book in e-mail correspondence with each other and then each, though hardly a master of the other's language, translated the other's contributions. The parts Kelly read had German and English embedded in them (Germglish?) and the theme, which he claimed at one point to be the theme, the theme of the Odyssey and Hamlet and dozens of other classics of world literature, was the return of the repressed. He read from the last section of the book—a tour-de-force meditation on a shameful childhood memory, on Proust's Madeleine-as-Magdalene, on the shame of trespassing on the borders of the invisible, that had me and I'm guessing most everybody else breathless.
Birgit Kempker was born in Wuppertal, Germany. She now lives in Basel, Switzerland, where she works as a poet, essayist, translator, novelist, dramatist, and performance artist. Recipient of many prizes and fellowships, she has published thirteen books, and has produced a dozen theatrical and radio plays.