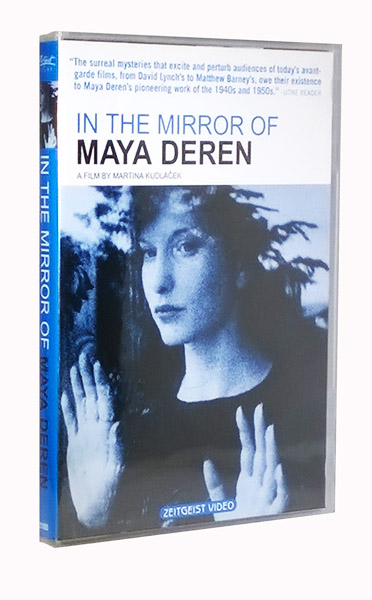 In the Mirror of Maya Deren

With In the Mirror of Maya Deren, documentary filmmaker Martina Kudlácek has fashioned not only a fascinating portrait of a groundbreaking and influential artist, but a pitch-perfect introduction to her strikingly beautiful and poetic body of work. Crowned "Fellini and Bergman wrapped in one gloriously possessed body" by the L.A. Weekly, Maya Deren is arguably the most important and innovative avant-garde filmmaker in the history of American cinema. Using locations from the Hollywood hills to Haiti, Deren made such mesmerizing films as At Land, Ritual in Transfigured Time and her masterpiece Meshes of the Afternoon. Starring Miriam Arsham, Stan Brakhage, Chao-Li Chi, Rita Christiani, Jean-Léon Destiné, Katherine Dunham, Graeme Ferguson, Alexander Hammid, Judith Malina, Jonas Mekas, Martha Mondesir, André Pierre, Amos Vogel, and Marcia Vogel. Written and directed by Martina Kudlácek. Camera Wolfgang Lehner. Editor Henry Hills. Original Music John Zorn.

Includes two rare Maya Deren film "fragments:" Witch's Cradle (1943), outtakes from a lost work starring Marcel Duchamp; and Ensemble for Somnambulists (1951), an important unpublished choreographic study for The Very Eye of Night; Stan Brakhage's hand-painted film Water for Maya (2000), a tribute to Deren that he is seen creating in the documentary; Maya Deren filmography; optional English subtitles for the deaf and hearing impaired. Zeitgeist Films
Add to Cart
<
>
"This is the second documentary on Maya Deren to date, and certainly an improvement on the last one, Invocation Maya Deren (1987, Art Council of Great Britain) by JoAnn Kaplan, narrated by Helen Mirren. Rants by Joseph Campbell, Stan Brakhage and Hella Hammid (Deren's camerawoman in two early films) add to the legacy and detract from the work. Kudlacek's use of primary sources leads her into the previous pitfall of ranting, for it is clear that everyone did not love Maya Deren. And since it's a woman working in a field that few women enter its not surprising that there are still grudges when dealing with the legend.
For the first time Katherine Dunham comes out and speaks about her relationship with Deren who served as her West Coast manager for 'Cabin in the Sky' during the 1940's. It appears that Dunham felt more gratitude was due. Also noteworthy is an interview with Rita Christiani who starred in Ritual in Transfigured Time (1946) who discusses her working relationship with the filmmaker. As usual Stan Brakhage tells his tales of what Maya Deren did at the wedding of Geoffrey Holder. She was invited to the party to give a blessing and winds up hurling the refrigerator and snarling at the guests according to Stan, who declares he is the only one who understood her last two films. Talkative and captivating, Brakhage, who spent several months on Deren's sofa as a poor struggling artist, is content, however, showing us a work in progress (shown at Venice International Film Festival 2001) Water for Maya.
Kudlacek, as have many scholars of Deren's work, traveled to Boston University Mugar Library Special Collections and read the papers of the filmmaker donated by her mother Marie Deren. Then she visited Anthology Film Archives in New York to look at the films. To Kudlacek's credit she discovered a film in an unmarked can at Anthology the precursor to The Very Eye of Night (1952), Deren's last completed film, called Ensemble for Somnambulists, a student project made in Canada in 24 hours. The Czech filmmaker also wet-spliced a film on the making of The Very Eye of Night with Deren on a crane shooting the Antony Tudor Ballet dancers painted in black with a white backdrop. Discovering these two later pieces of Deren help to update her history, where most filmgoers are mostly familiar with the period between 1943-46.
With her film team Kudlacek traveled to Haiti to meet with devotees who might have remembered Deren. Little remnants of 'being there' on Deren's trail are left for the spectator to discover. This of course provides an aesthetic signature that makes the documentary personal.
Kudlacek restores some sanity to the legacy of Deren, esteems her work, research and ideas. There are few woman filmmakers who are allowed the luxury of having their work speak for them rather than personal anecdotes. In the Mirror of Maya Deren manages to weave both and provide a provocative biography of the person who was most responsible for the second wave of the American film avant-garde." — Moira Sullivan