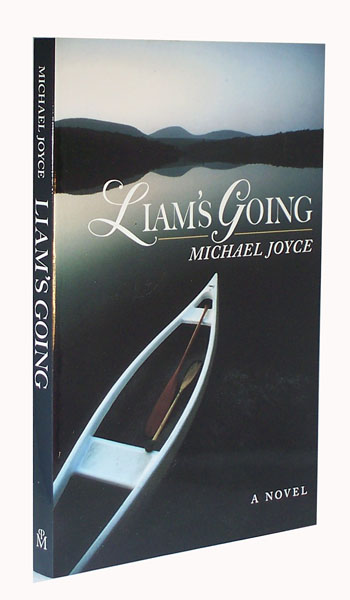 SKU: 1882
$15.00
$15.00
Unavailable
per item
"Michael Joyce has written a stunning novel of the deeply perplexing paradox of love. Liam's Going begins as a simple story, a young man being driven to college, and unfolds into a mythic grandness. It reminded me of the best of James Salter and John Updike, as well as Faulkner and the other Joyce, beautifully wrought into something tender and serious and original." — David Means

Liam Williams is heading to college, and eagerly anticipates his independence. But for Cathleen, his mother, and Noah, his father, Liam's going is anything but easy. Both project their lost dreams of youth onto their only child, and when Cathleen leaves Noah alone upstate to drive Liam down through New York's Hudson Valley to his school, their separation becomes a moving story of learning how to come to grips with losing without letting go.

"Imagine a couple — she, a poet; he, a lawyer — sending their only child off to college. Imagine the changes this will make in their lives. And then imagine a magical telling of their story. Add to that a glorious evocation of the Hudson Valley — the River, the mountains, the legends, the tales — and you have still only an inkling of the power of Michael Joyce's novel, Liam's Going. The novel is like a poem. Liam's mother, Cathleen, is allowed, barely, to mother her son on their journey downriver to his college. He gets edgy and difficult; they stay in a crummy motel; their conversations are blunt, truncated. But her memories -- alternating with those of her husband, Noah, left behind to await her return alone -- are vivid and enthralling. Meanwhile, just below Albany on the journey south, she descants on the Dutch who believed these hills to be 'full of strange creatures who overturned ships and lives alike.' She muses on Liam's childhood -- his irritating love of fantasy, the ways in which raising a son tested a marriage and the parents' sense of who they really were. And she flashes back to a summer early in her marriage, when she had a brief affair with a man named Paul' while Noah, at home, remembers a French girl he knew when he was very young; now he brings those memories up through the years 'the way someone dives for smooth colored stones.' And, as she realizes that there are only 40 minutes left in the trip (they've just passed Peekskill), Cathleen remembers sitting with Paul in a coffee shop in Cold Spring . . . and then her throughts turn to 'the second life' she and Noah would have to form of their marriage . . . 'and asks herself the terrible question, What if we are not enough for each other after this?' We will keep this novel and read it again someday. Michael Joyce, who lives 'along the Hudson River,' is a professor of English and Media Studies at Vassar College. His book is a love story to a marriage and a river and an eloquent tribute to the power of memory." — Ann Lafarge, Taconic Press (8 newspapers)

"This new novel isn't merely steeped in Hudson River Valley lore, it positively radiates with knowledge of and affection for the area. . . . In addition to being an eloquent meditation on memory and passion, [Liam's Going] is a sort of poets' guide to the area between Peeksill and Albany. . . . The attentive reader is guaranteed several worthwhile epiphanies per chapter." — ForeWord Magazine

"Constructed much like a poem, this novel's lines of dialogue, details, and descriptive phrases appear and reappear to revelatory effect; its narrative jumps between present, past, and beyond convince us that the present is only a thin netting tossed over the past. ...The book's musical language is at times as gorgeous as Cheever or early Updike..." — Publishers Weekly

"Liam's Going by Michael Joyce is a deftly written novel about a young man named Liam who is about to go off to college. Yet his departure has repercussions on the strained marriage of his parents, each of whom must confront different pulls and separate loves in their lives. Liam's Going is a introspective, thoughtful, and ultimately emotionally rewarding story." — Midwest Book Review(five stars)

"There is a depth to Liam's Going, an intensity if you will, that will draw you in. Michael Joyce so seamlessly moves from the present to the past without skipping a beat. The poetic style of his writing is beautiful and at the same time intriguing. Joyce takes a common family occurrence, one many readers can relate to, and throws in enough variables to keep the story fresh and in turn keeps the reader interested in the outcome of all the characters involved. Liam's Going is a novel I would consider to be an intellectual gem." — ABCD Diaries blogspot
Hélène Cixous once wrote that “Michael Joyce is a subliminal explorer--he sets off to explore mental regions that are generally neglected, as if they were forests or deserted islands. ... This is the secret of great poetical writing.” Mr. Joyce's first novel, The War Outside Ireland, received the Great Lakes New Writers Award, and was described by John Hawkes as “a tall tale, a family history, [and] a lyric meditation on the holy temper of the Irish mind...” The New York Times called his digital novel, afternoon, a story, “the granddaddy of hypertext fictions.” His fourteen print books include seven novels, most recently Media: a picaresque; three books of poems, A Hagiography of Heaven and Vicinity, Biennial and Paris Views; a mixed collection of media essays and short fiction from SUNY, and two influential collections of essays on digital media from University of Michigan Press. Online hypertext fictions are listed below. He is Professor of English and Media Studies at Vassar College and lives along the Hudson River.