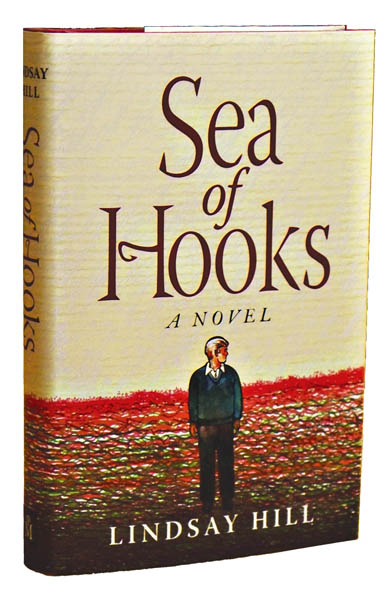 ​"Sea of Hooks is brilliant. Mr. Hill, a sometime-banker and longtime poet, spent twenty years writing Sea of Hooks, a novel so audacious, so intricately constructed, that it was a reading experience unlike any I’ve ever had. And it completely reinvents the bildungsroman in the process. . . .It’s a novel that proves that the complexities of one young man’s daily life, his preoccupations and his nightmares, and above all, his compassion, can be extraordinarily fascinating, suspenseful, and revelatory."--Carolyn Oliver, Rosemary and Reading Glasses

Clothbound, sewn, jacketed, 351 pages, 5.5 x 8.5", 2013, 978-1-62054-006-0​
​
​
Add to Cart
You may also purchase from:
<
>
STARRED REVIEW: "This first novel by poet and one-time banker Hill is less a novel, in the traditional sense, than a spiritual biography. Christopher Westall, raised in San Francisco in the 1950s and heady ’60s, is the only child of an alcoholic and distant father and an eccentric, meddling mother. The boy is alarmingly fragile and sensitive, and possessed by a soaring imagination and a slew of fascinating theories about sound, ice, 'knife people' under his bed, and, most significantly, a world from which 'messengers' communicate with him via random detritus he picks up in the street—slips of paper, foil from cigarette packs, etc. These he orders into a fantasy world. Repeated sexual abuse by a tutor makes escapism even more urgent for the 12-year-old, as do subsequent tragedies: his mother’s suicide in his bed; his father’s career misfortunes and early death. Not until Christopher is befriended by an older man named Dr. Thorn does a kind of mentoring occur; indeed, Dr. Thorn’s counsel—and final messages—delivers Christopher to a form of peace, achieved through the practice of Buddhism and a pilgrimage to Bhutan when the latter is an adult. But it is Hill’s language that dominates this story, which is told in fractured bits, not unlike the messengers. Christopher’s meditations on death, memory, the relations of bones to the self, not to mention rain and snow and fog and the cosmos, are mystical, highly poetic and musically rendered—an almost impossibly sustained performance from beginning to end. Nearly every paragraph astonishes, every moment rich with magic and daring. Reminiscent of Robert Pirsig and Herman Hesse in its concern with authenticity, Sea of Hooks also has the unbearable anguish of Kafka’s diaries—making for an unforgettable trip." — Publishers Weekly

Lindsay Hill's Sea of Hooks begins with a man named Christopher Westall staring at his mother's asphyxiated body. Her suicide is only the latest in a long series of traumatic events in Christopher's life, and it creates an emotional fissure that widens into a vast gulf between life before and after her death. The narrative splits accordingly, weaving together two chronologies: one timeline describes his dysfunctional youth; the other follows his trip to Bhutan after his mother's suicide.
His upbringing is almost a parody of Victorian repression, while the trip to the "Far East" in search of spiritual healing is a painfully well-worn trope. Nevertheless, Sea of Hooks is an impressive work that uses an experimental, fractured format to great effect, benefiting from Hill's powerful poetic sensibility. The novel is divided into very short chapters, ranging from a sentence to a paragraph in length. They build haphazardly, the way memories tumble forward after an initial triggering event. Each chapter is meticulously crafted, representing a stand-alone thought or image. Some include a significant amount of narrative detail, accumulating into a coherent image of Christopher's childhood; others begin as simple descriptions and morph into stream-of-conscience explorations of his mental state.
The novel's title could easily refer to Hill's unusual writing style, as each short chapter "hooks" the reader afresh, offering a thought-provoking and multifaceted image best absorbed in an instant and pondered for days. Sea of Hooks is the rare novel that is both experimental and accessible, at once a joy and a challenge to read. --Emma Page, bookseller at Wellesley Books
Discover: A poet's debut novel is a dark, metaphysical story that is cerebral, poetic and eminently readable.-- SHELF AWARENESS FOR READERS

"It has been a long time since a book kept me up past my bedtime and became an obsession until finished, but that’s exactly what happened with Lindsay Hill’s Sea of Hooks: the 2014 PEN Fiction Winner.
Full of haunting and at times, deeply disturbing, images the novel tells the story of a young man, Christopher, who must grapple with many complexities, including his mother’s mental illness and his father’s alcoholism. Christopher endures something no young teenager should ever have to experience and we share this experience with Christopher and watch as he attempts to survive it. The story moves in and out of the past and Christopher’s journey as a young man to understanding.
'He found how pain flattens you, and thought how much pain the knife-people must be in to be so flat, and he wondered if that was why they had let Mister Must come out: because they needed him to know what makes a person a knife-person – it was pain.'
The above passage is an entire 'chapter' in the novel, entitled 'Knife-People.' The book is comprised of a collage of these mainly short sections (some only one sentence), with titles such as: Bent-Back-And-Forth Plastic Thing, Fire, Glass, The Dream of the Drowning Child. The titles often repeat to indicate to the reader a continuation in theme or storyline. Hill teaches his reader to begin to watch for the title to show up again, and to know immediately where he will take us.
Much to my surprise, the structure of this book did not wear me out. In a novel, I like to spend time with the characters, the words stretching out the experience and providing depth to the encounter. I expected the truncated “chapters” to annoy me, but they never did. Instead, I was so deeply drawn in to Christopher’s unusualness and his sad circumstances that I just had to know if he would, indeed, survive the traumatic experience. I cared deeply for Christopher.
Which is not to imply that I felt pity for Christopher. Hill doesn’t steep his narrative in sentimentality or remorse for what occurs. What happens in Christopher’s life just is, and that is exactly how it feels when you are a survivor of abuse. To survive, you often distance yourself, not only from those around you, but from yourself and Christopher grapples with his responses. He is cut from a different cloth and what happens to him, affects him in ways it would not affect others. It is all very fascinating: the City of Messengers, the Wonder Ocean, Swinging on the Hook, 'between the substantial and the unsubstantial, between single things, fused multitudes and discarded fragments – the hint, the map, the origin and the arc. . .'
Sea of Hooks is a novel to read again and again, full of treasures and new ways to think about old things."  — P.T. Butler, The Tishman Review, November 2014
FINALIST FOR THE 2014 OREGON BOOK AWARD
Citation by Stacey D'Erasmo: "A glittering, prismatic, astonishingly original collage of fragments that make up the life and soul of Christopher Westall, a character with a mind as big as the world. Hill’s range, sentence to sentence, scene to scene, juxtaposition to juxtaposition, is nothing short of virtuoso, as is his mastery in articulating and exploring emotions of nearly unbearable ambiguity, contradiction, grief, and love, along with spiritual seeking. Christopher goes from San Francisco to Bhutan, from deep within himself to the furthest reaches of his relationships with others, tracing an unconventional course that is as heartbreaking as it is delightful. An adventure of body, mind, and soul unlike any other."


WINNER OF THE 2014 PEN CENTER USA FICTION AWARD: Citation: "Sea of Hooks, by poet Lindsay Hill, is a fractured novel, constructed of short, titled paragraphs, that beautifully captures the fractured psyche of its protagonist, Christopher Westall. 'Every single thing depends on shattering,' reads the entirety of one section, and another, describing Christopher’s fragile mother, simply reads, 'Evelyn wanted nothing to be broken.' Christopher is broken—by his mother’s suicide, by childhood sexual abuse by a tutor, by the loss of his one real friend, in a fire—but in sifting through the shards of his childhood, and a trip to Bhutan in his early twenties, he reconstructs his self. This is a coming-of-age story that depends on shattering. It is never maudlin, and often wry, especially in its observations of San Francisco society; the narrative—for there is a narrative, and it’s often suspenseful, despite its non-linear form—is surprising and moving. Hill’s characters are complicated and vividly rendered and his precise, evocative language makes Sea of Hooks a thrill to read."

FINALIST FOR THE CHAUTAUQUA PRIZE. Citation: "In the novel Sea of Hooks, the reader gathers and rebuilds the fragments of wildly imaginative Christopher Westall’s traumatic young life as he travels from San Francisco to Bhutan. 'Every paragraph is like a tiny jewel of a chapter,' readers said, noting that Hill 'is able in one sentence to evoke pain, grief, pleasure, joy.'” [This national literary award is relatively new. Chautauqua Institution received 155 books (fiction and nonfiction) from 78 publishers as nominations for the 2014 Chautauqua Prize, each evaluated by three reviewers representing a panel of Chautauquans who are professionally involved with books and the literary arts. Twenty-nine titles received recommendations from at least two of the three reviewers and advanced to the longlist stage. A three-person, independent, anonymous jury chose the six finalists and winner.]
dNEWS, REVIEWS AND INTERVIEWS:

Kassie Rose, The Longest Chapter: Have you seen me?

Glyph Art Space: An exhibition of journals and artifacts from Lindsay Hill's 20-year-long project of writing Sea of Hooks

Publishers Weekly names Sea of Hooks one of this year's top five novels:"Best Books of 2013"

Publishers Weekly Radio features an interview with Lindsay Hill: "How writing poetry enabled the writing of a novel"

Review by Charles R. Larson in Counterpunch: Hell is Other People

Review by Maya Muir in The Oregonian: One of the Best Books of the Year

Publishers Weekly featured Sea of Hooks among its picks: The Big Indie Books of Fall 2013 ​
Read the opening pages from the novel in the fall 2013 issue of New England Review: Opening chapters

Conjunctions magazine features a later excerpt from Sea of Hooks
​