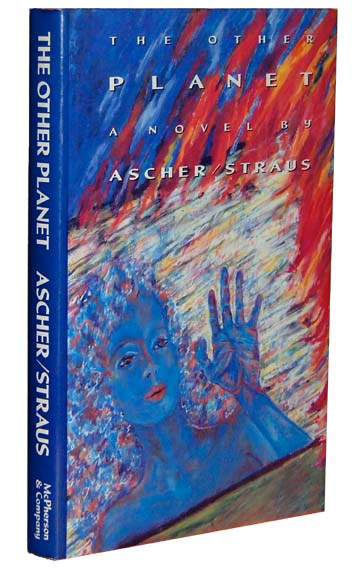 The Other Planet (clothbound)

"A pretty definitive statement about the post-modern experience... The future is sparked by a mysterious stranger, Humberto Vilanescu. Rich, foreign, partly messianic and partly Mephistophelian, he's a combination of the Aga Khan, Howard Hughes and The Man Who Fell to Earth. . . . This is a mysterious, absorbing, sexy and troubling reflection on these weird times, and it should be read." — John Strausbaugh, City Paper

A highly prescient novel of science, magic and adventure, The Other Planet introduces Valeria Florescu, who quits her job in a modern research lab and sets out on a quest for "the extraordinary." On her journey into the furthest possibilities of the future, Valeria travels through hilariously tragic and tragically hilarious banalities of American life. Eerily, this novel played a small but acknowledged part in the Romanian Revolution after the authors were interviewed by the Romanian desk of Radio Free Europe.

“The Other Planet is one of the indispensable novels of the twentieth century, a complex and unsentimental examination of the tensions created by rapid social and technological change. Carefully constructed possibilities may be gleefully abandoned or lives that seem coherent in their design may be suddenly eclipsed by larger forces. Something sinister is still happening at the edges of perception, something both desirable and terrifying. In The Other Planet, the most common name given to that thing that inspires both longing and dread is ‘the future.’ . . . It is a journey through Ascher/Straus-world where film, TV, dreams, and brief conversations collide to create a hyperreal and moody landscape.” —Stephen Beachy

"Ascher/Straus constantly force their readers to abandon expectations. In their later work, those expectations are foiled more subtly, and within structures that resemble more traditional plots, but whose ambiguities and multiple possibilities are all the more striking for that reason. In The Other Planet, Valeria is haunted by the sense that there's a completely different way to live, akin to living on another planet, a future that one can enter now, through sheer force of will. The Other Planet examines the ways the myth of the future creates a profound disillusionment and a yearning for the impossible. It critiques that myth while harboring no nostalgia for the forms that trap characters in the present, the habits of family and full-time employment. Valeria finds herself in a traditional romantic plot, receiving attentions from two radically different suitors. There's a nice, inarticulate working-class guy who's desperately in love with her versus a creepy evil genius-entrepreneur-rapist, Humberto Vilanescu, who offers her a part in the vague and improbable 'future' as an escape from the relentlessly barren present. 'We long for life to be like a waking dream, an adventure whose coherence, whose "plot" provides something akin to meaning,' Humberto tells her. It's exhausting, their need to resist a monotonous present rooted in an overly familiar past, and offering only the clichéd scripts of family, job, romance. "Mass agreement = History," Valeria's dying mother scrawls on a pad, unable to speak. 'It happens. Again and again. There's no resisting it, though it takes you by surprise every time. Now everyone is talking about marriage again....' Valeria's not having it either. The nice guy gets left behind without a trace of sentimentality for the contrived and narcissistic 'love' he offers as some emblem of what it is to be human. Human, as currently configured, is not OK. She journeys instead through Ascher/Straus-world, a world where film, TV, dreams, and brief conversations collide to create a hyperreal and moody landscape. ....Ascher/Straus have chosen their own canon and manifested that subjective history as a unique constellation. Ascher/Straus are a crossroads where Doctor X, Shadow of a Doubt, The Damned Don't Cry, and Lola Montes come together with the sort of 'European' fiction that involves an intellectual engagement with the world. Despite all the thinking that goes on in these books, they are never pretentious, boring, or incomprehensible and are consistently funny." -- Stephen Beachy, San Francisco Bay Guardian​