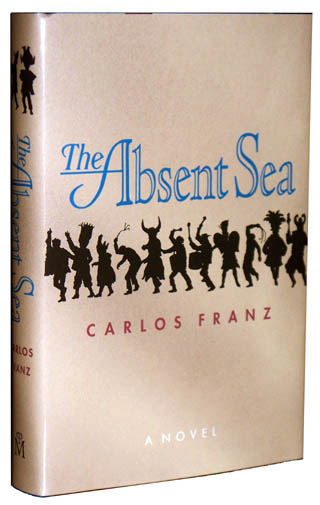 Translated from the Spanish by Leland H. Chambers.

The Absent Sea is the English-language debut of one of the most important Chilean novelists living, a major novel that hovers between real history and timeless mythology. Carlos Fuentes has declared this book to be one of the top ten Latin American novels of the past ten years.

Just before the coup d'etat that overturned Chile's govenrment under Allende, a young, idealistic judge is posted to a provincial center in the vast northern desert. After the coup, the town is occupied by the military, which establishes a concentration camp for dissidents. Immediately, the conflicted relationship between the judge, Laura, and the commandant, Major Cáceres, leads to a life-changing decision which results in her lengthy exile to Germany. Twenty years later, she returns to Chile to face up to her past, and to answer the scathing question flung at her by her daughter: "Where were you, Mamá, when all those horrible things were happening in your city?" Laura's reply to her daughter takes the form of a long letter about the dramatic events of twenty years before. Meanwhile, in alternating chapters, Laura's return coincides with a religious festival. By the end of three days, the city and all its Chilean inhabitants will be forever altered.

Add to Cart
Also available from:
<
>
"'Where were you, Mama, when all those horrible things were taking place in your city?'
This accusation from her daughter plunges Laura, the heroine of Carlos Franz's English-language debut, set in post-Pinochet Chile, into an abyss haunted by terror and shame. The provincial shrine city of Pampa Hundida is panic-struck when Laura, a former magistrate, returns to the post she fled two decades ago. How will she judge the townspeople who bore witness to atrocities committed in the wake of the military coup that ousted Allende and drove her into exile?
The Absent Sea is not easy to read but it's important to do so. A dark and complex psychological novel along the lines of Dostoyevsky, it dissects dichotomies between past and present, logic and desire, good and evil. Laura is not likable at first; she doesn't even like herself, having cowered in Germany for 20 years rather than remember. And when she allows her memories to return, her recollections, labyrinthian and laced with recurring mantras, are trance inducing. But if Franz's language sometimes sounds overwrought in translation, it also has moments of subtle beauty.
A victim of torture and rape, Laura reserves her harshest judgments for herself. "She sat down when she should have remained standing" — she was complicit. But through her efforts to close the growing gap between herself and her daughter, Laura comes to recognize shades of gray and that the burden of history, both the innocence and the guilt, is shared by all of us. —Tom Lavoie, Shelf Awareness (Shelfawareness.com)

"Like any great novel—and this is one of those—Carlos Franz's The Absent Sea brings the individual destiny face to face with the collective destiny. With a very clear gaze, distant but lovingly, Franz dares to look at the melodrama of some lives and elevate it to the tragedy of a nation. This is a new voice, powerful, creative, captivating, and deeply involved with the word." --Carlos Fuentes
Jury citation for the awarding of the Premio Internacional de Novela, del Diario La Nacion—Sudamericana for 2005

"The Absent Sea is less about the pain of living under dictatorship than it is about the gaping tensions that separate one generation from the next. In the novel, Laura and her daughter stand for these two generational perspectives on Chilean history and memory, each of which is drafted in letters they address to one another. . . .By alternating between these two different registers, the text manages to skillfully interweave a mother-daughter story and the larger history of dictatorship and exile. . . . As a story of clashing perspectives on a massively charged historical moment, the novel moves insistently toward the possibility of reconciling, even resolving, one and for all, the conflictive coexistence of painful memories, a longing for indictment, and a desire for closure. It does so to the very end, and will please readers who stay with it to witness it closing pages." — Sergio Delgado, Review: Literature and Arts of the Americas, Americas Society, 85 [vol. 45, no. 2]

"Carlos Franz is one of the most noted writers in South America, but he appears in English for the first time here. The Absent Sea is a novel about memory and responsibility, set in the aftermath of the military dictatorship in Chile. Laura, a judge in exile, returns to Chile to answer her daughter’s question – where were you, Mamá, when all those terrible things were taking place in your city? The book cuts between the present, Laura’s written response to her daughter, and memories of those terrible things. Laura’s letter to her daughter is the highlight of the book. It is always a pleasure to read a novel with a powerful, intelligent female protagonist, and reading the character Laura one is reminded that she is the sort of character missing in the writing of so many other Latin American men. The Absent Sea is a terrifying and mesmerizing novel that succeeds in a similar way to Téa Obreht’s The Tiger’s Wife but with a more immediate punch in the gut. Highly recommended for all fiction collections." — Hey Small Press

"Returning to atrocity twenty years later doesn't change that atrocity happened. . . . Confronting how rifts of a nation create wounds that take a long time to heal and how to face a family you left to their fate, The Absent Sea is a poignant and gripping novel, very highly recommended." — Midwest Book Review
Click here to download a sample text

Read the Words Without Borders review by Mythili G. Rao: The Absent Sea

Read an interview by Jonathan Blitzer at Words Without Borders:A Region of the Spirit

​Selected as the lead title for June by Hey Small Press!: www.heysmallpress.org/