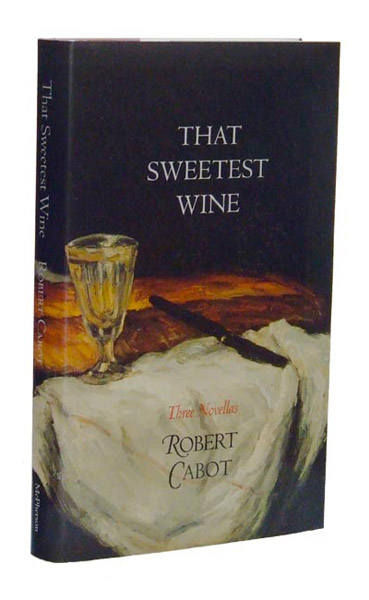 SKU: 1607
$25.00
$25.00
Unavailable
per item
"Robert Cabot's new book is as good a piece of writing as anything coming out of the United States. That Sweetest Wine deserves and surely will get wide readership." — Farley Mowat
​
​Vin santo, a strong, intensely sweet wine, was made by islanders in certain parts of the Mediterranean, from grapes that were laid out to sweeten on hot granite ledges in the autumn sun. Each of these elegiac novellas fuses traditional narrative and poetic prose to explore the naked feelings of loss. That sweetest of wines kindles implacable absence held in memory -- yet fortifies lingering hope.
The island villagers in Breath of the Earth recall the misery and joys of past lives, the heroes in battle against pirates and harsh gods, and their natural world now slipping away. In Rat in the Boardroom, the founder of an economic empire lies abandoned to his dotage on his sick bed, possessing a blindness which will inflict his descendants. In the final novella, Touch of Dust, a man's life is played out against a background chorus of his mother, his father, and his wives. Free-spirited youth, soldier in the Second World War, painter, sailor, outcast, lover-- he was all of these, and none, and yet...

​ Clothbound, sewn, jacketed, 264 pages, 5 x 8", 1999, 0-929701-60-7
Add to Cart
<
>
"In his first fiction in nearly 30 years, Cabot (The Joshua Tree, 1970) offers an exemplary trio of novellas, each occupied with the theme of reconciliation to oneself and one's losses, presented in often stunning prose. Each tale is told from multiple perspectives -- generally, those of several male members of a single family -- spanning decades and, in the first novella, "Breath of the Earth," centuries. "Breath" chronicles a Mediterranean village's fortunes, conflicts, and sufferings. Cabot's rendering of places, though they are often too stylized to reveal their real-world basis, is marvelous. The olive trees, parched dirt, and wine, however underspecified (is that Mediterranean land really Italy?), become hypnotically real as a history of fierce pirates, wayward sons, and, the most powerful of all malefactors, modernization, unfolds. Cabot's scale and tone are intimate and sometimes impressionistic, but the pleasure of the volume is less in what happens -- often events that are hard to place or even identify -- than in the way the tales are told. Cabot's mode throughout is elegiac: his narrators are woeful through not bitter. In "A Rat in the Boardroom," a son learns and finally leads the business his father established. By selecting discontinuous scenes from different stages of each man's life, Cabot persuasively depicts the son's inability to comprehend his father's view of the world -- and the ways each man's values corrode the other's idea of what makes life worthwhile -- as intractable. The final tale, "Touch of Dust," completes the progression from village through family with its story of the solitary artist who attempts to wrestle his past into meaning and who emerges with an inspiring conviction about the love he has known. For all its extraordinary lack of specificity, Cabot's incantatory prose memorably captures the dramatic tragedy of living, and the precious, endangered whimper of redemption." — Kirkus Reviews (October 1, 1999)

"These three elegiac novellas are primarily concerned with the twin realms of memory and regret. Characters recount their lives and attempt to reconcile traumatic experiences, desperately searching for the shred of hope that might render their tragic existence meaningful. That Sweetest Wine's novellas are united by the appearance of vin santo, a strong, sweet wine that may provide an antidote to despair; the libation recalls a simpler past when man toiled on the earth and believed in only what he could hold in his hands.
Robert Cabot balances the alienation his characters have experienced with his mourning song for an all but forsaken natural world. 'Breath of the Earth' details the decaying landscape of an Italian isle as modernization arrives and works its inevitable change. The increasing presence of industry on the island threatens to diminish the importance of the islanders' physical labor and their communion with the earth. 'A Rat in the Boardroom' tells the story of a father who chairs a large corporation and the son who succeeds him. Ultimately, each man's differing but equally hollow vision of capitalism does little more than emphasize his isolation and separation from human existence. 'Touch of Dust' deftly closes the collection with its tantalizing tale of a mysterious Italian artist and the uncertainties that plague his life. Cabot suggests that the inability to discover the essence of others may lead one to doubt the possibility of finding his own identity. The artist's pursuit of the natural world through painting is masterfully countered with his own attempts toward self-discovery. All three fictions have a narrative that temporally leapfrogs forward and back, offering glimpses of characters at different moments and from varying perspectives. Though Cabot's fragmentary narrative ultimately reinforces the irrevocable split between man and the earth, his fictions remain a beauteous tribute to the natural world." — Jason Picone, The Review of Contemporary Fiction

"Filled with intimations of mortality, celebrations of indifferent nature, and disdain for contemporary civilization, That Sweetest Wine is made up of a trio of novellas that sing--often intriguingly--of the vanishing ways of the peasant primeval. Cabot joins the techniques of modernism, its love of language for its own sake, to an elemental . . . romanticism of the male. . . . The first novella, "Breath of the Earth," chronicles the decline of the manly rapport with the good earth. Set in Italy, the tale jumps from the lucky heroics of 1797, when a farmer defeats an invasion of pirates by shooting off a cannon, to the farce of 1997, when the barren land, now overrun by tourists, is tended by fragile old men. In between a man talks about the joys and sorrows of a farmer's life. Hard work is leavened by delicious feast days: "We juggle hot shells in our fingers, scoop out the meat with our knives, throw ourselves in the warm sand, shielded from the dew of the fire, and our heels float up over our heads in the fumes of the heavy wine." Sensations offer saving shocks of comfort: "nightingales screeching, the squawk and thumping of a pheasant, the cuckoo chucking like a chicken--the green smells of grasses and thistles hurrying to flower before the summer death, frightened lizards and black snakes twisting away." Cabot's prose is most impressive when physical impressions jolt into language with a hedonistic rush, as when the moon rolls into view "like a bruised overripe persimmon."... The sensibility behind the rape of the primal connection is anatomized in "A Rat in the Boardroom." An aged mega-mogul is on his deathbed, surrounded by mirrors (symbols of his narcissism) and sunk in a mental funk of astonishing poverty: "And heaven is the parent, the power to ignore and to be-better-than and to punish, the being right without effort, the eternal seat of honor, punctual and orderly, with stern authority reaching out in all directions to direct the proper course of mankind." For Cabot, the blight of our civilization stems from the marriage of self-righteous Puritanism to an unbounded secular passion for acquisition and control....The final novella, "Touch of Dust," returns once more to our alienation from primal forces, though the theme is given an aesthetic twist. The narrator is an artist cut off from his deepest roots; he realizes "that failure is not the end, that there is still sweet wine to be sipped with joy, wine that holds the sun." Cabot's descriptions of the natural world are marvelously detailed: "High ripe hay, poppies--blood-red wounds salved by the icy foam of the spittle fly--magentas of lupine and clover, lavender-brushed white buds of the wild onion--plucked, its pungent smell." — Boston Review

"Intensely dramatic, lyrically expressive and suffused with passionate feeling, the three novellas collected here demonstrate Cabot's concern that humanity has lost touch with the natural world. In the three decades since he published the highly praised novel, The Joshua Tree, Cabot has not lost his ability to harness theme to emotion, but new readers may find his insistent voice too highly charged. Told from multiple points of view, each novella looks back on lifetimes of stress and struggle. We meet the narrator of "Breath of the Earth" when he is a 13-year-old boy living in a desperately poor village on an Italian island whose soil, which once supported fig and olive trees and grape vines, is becoming as barren as modern life. Despite his laborious existence, as he matures, he finds that a harmony with nature sweets the pain of survival. But developers and tourists, and his son, are poised to destroy simple rural life. The image of the rodent under a conference table that concludes "A Rat in the Boardroom" is appropriate to Cabot's scathing tone as he flashes back through the life of a dying man whose ruthless business practices have also impoverished his son's soul. "Touch of Dust" returns to Italy, where the narrator, a reclusive artist, recounts the degradation of the natural world, "a dreadful corruption...where each hope withered," but finally achieves redemptive insight in recollecting the people he has loved. Cabot's prose shimmers with poetic imagery as he recalls halcyon summer days and rugged landscapes, but one needs a certain tolerance for florid writing to fully enjoy these novellas." — Publishers Weekly (November 8, 1999)