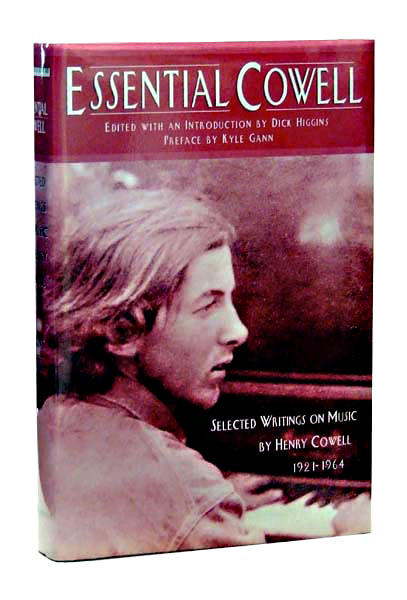 Edited and introduced by Dick Higgins. Preface by Kyle Gann.

This volume presents for the first time ever a generous selection from the more than 200 essays and articles written by one of the most original American composers and musical theorists of the twentieth century. There are articles on harmony, melody, notation and music history; essays on vocal innovation, folk music, and the intersection of music with other arts; reviews of concerts and recordings by contemporaries; notes on several of his own works, and several pieces on his life and experiences as a composer. Henry Cowell may be best known as a creator of "tone cluster" compositions, which he began writing while in his early teens, but his influence has been far broader and much deeper. As founder in 1925 of the New Music Society, he became a concert impresario for works by Carl Ruggles, Arnold Schoenberg, Charles Ives and Leo Ornstein, among others. From 1927 to 1958 he was the publisher of New Music: A Quarterly of Musical Compositions. His many students included George Gershwin, John Cage, and Lou Harrison, but his interests extended beyond western classical traditions, and his radio program, "Music of the World's Peoples," introduced a large audience to world music long before it was fashionable. Just as Cowell's groundbreaking book of 1930, New Musical Resources, continues to inspire successive generations of composers, Essential Cowell is key to understanding the origins and expanding dimensions of contemporary music.

Add to Cart
Also available from:
<
>
"Though Henry Cowell . . . was a composer and a music critic of startling originality (as well as a producer, a promoter, a publisher and an ethnomusicologist), he has remained largely a 'background figure' in American music. But editor Dick Higgins' Essential Cowell: Selected Writings on Music promises to bring Cowell's criticism into the spotlight. Gathering together essays on Stravinsky, Bartók, John Cage and many other composers, as well as selections from Cowell's unpublished opus, The Nature of Melody . . . , this volume will enlighten aficionados of World Music and engage anyone interested in innovative composition." — Publishers Weekly 10/29/01

" . . . Cowell was a pioneer of experimental music and influenced composers like John Cage. . . .The late [Dick] Higgins, an artist, publisher, and composer who studied with Cowell at New York City's New School, collected these 46 essays by Cowell. Included are eighteen studies of fellow musicians and composers, from Charles Ives to Béla Bartók; a section on world music; and essays on musical craft, theory, and history. . . .[His] writing is accessible and perceptive, and even those without extensive knowledge of 20th-century music will find these pieces engaging. Recommended for music and large public libraries." — Library Journal 11/1/01

"Henry Cowell was one of the most important figures in the history of American music in the 20th century, and this collection of his writings is a welcome addition to our knowledge of that history." — Professor James Tenney, California Institute of the Arts
To come