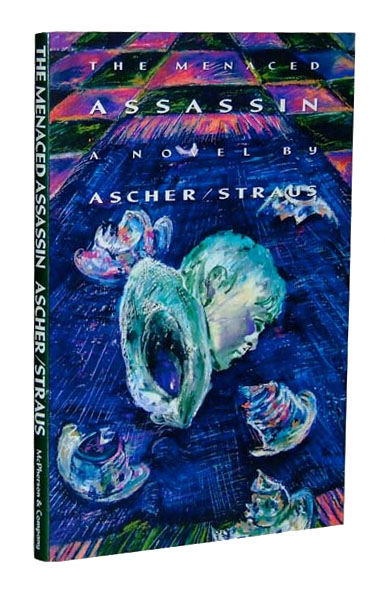 A dazzling fusion of hard-boiled dialogue, psychological relativism and slapstick satire make The Menaced Assassin a post-Modern answer to Through the Looking Glass. Anti-heroine Celeste is an aspiring fashion designer, but first she must create an identity for herself, an identity she approaches through some "other zone" — a mirror-world pieced together from old Hollywood movie plots, scenes out of sleazy crime novels and melodramas, ads in trashy magazines, fuzzy AM radio shows, and a stream of great overheard conversations.

​This paperback edition is the second edition, issued in a new format completely reset.

A few copies of the first edition are available:
Paperback
Clothbound
​Deluxe signed limited clothbound
Add to Cart
Also available from:
<
>
"The novel's playful, nostalgic quality -- like remembering movie trivia, or guessing who gets the girl, who committed the murder -- keeps up its fast comic pace." -- Village Voice

"Throughout Ascher/Straus's work it sometimes feels like you are walking in and out of theaters at a multiplex where each is showing fragments of the same dream, yours or somebody else's. . . . .Of the published books, The Menaced Assassin is their most obviously experimental work, and its characters — Celeste, the Dane or the Swede, the taxi driver, one or several men named Antonio — are the shadiest. Freed from the pretense of plot, they are troubled by similar questions as the other, more plotted characters who will follow. They are obsessed with the future and with the unlimited sense of possibility that only gets horribly reduced anytime a decision is made, meaning created. It strikes Celeste as cruel that things lag so far behind the readiness of the personality for change. Or is it the other way around? In a letter from Finland, the Dane or the Swede writes that he no longer feels Scandinavian, so maybe not modern. These characters exist in precarious worlds, at the edge of 20th-century catastrophe. The clouds might turn oddly yellow, 'a kind of phosphorescence that makes one wonder if a chemical factory hasn't been dynamited somewhere on the outskirts of the city.' One day or the next, during one poorly remembered conversation or maybe one just imagined, these constructs say things like 'Everything you don't want will be readily available. They'll wheel it in like a roomful of prizes on a game show. But everything you need is no longer being manufactured.' When we can't even count on the reality of Celeste, her hair color or her continuity within the space or time of the novel, the repetition of certain stories creates a substitute for plot, the sort of mythic space of a Kathy Acker novel. We hear several times the story of a wife who allows herself to be seduced by her husband's boss for the sake of his promotion. It proceeds and ends or doesn't end in a variety of ways, merges with Celeste's own story of herself. Within the mayhem, the reader is constantly assaulted by ideas. Celeste is 'probably' one of those who 'knows that movies constitute our only authentic body of myth, who're interested, for example, in the political mythology of movies like Each Dawn I Die, a second rate prison film you can't watch without coming to the conclusion that every moral person is bound to find herself/himself outside the existing power structure, if only one chooses to exercise one's freedom, and that in the end, if one wants to lead one's own life, one must either band together against this structure or escape from it altogether. Or, in Flamingo Road it's clear that the only effective solution to political evil is murder. . .' . . . .Ascher/Straus have chosen their own canon and manifested that subjective history as a unique constellation. Ascher/Straus are a crossroads where Doctor X, Shadow of a Doubt, The Damned Don't Cry, and Lola Montes come together with the sort of 'European' fiction that involves an intellectual engagement with the world. Despite all the thinking that goes on in these books, they are never pretentious, boring, or incomprehensible and are consistently funny." — Stephen Beachy, San Francisco Bay Guardian