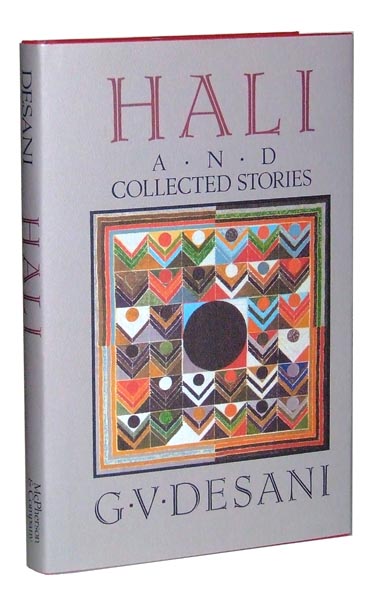 Forty years after the appearance of his classic novel, All About H. Hatterr, G.V. Desani broke his silence ​with this volume of twenty-three stories and one long prose poem, only the second full-length book of his fiction ever to be published. Many of the stories appeared first in literary anthologies and magazines, including The Noble Savage (edited by Saul Bellow), Illustrated Weekly of India, Transatlantic Review, and Boston University Journal. The stories are mostly written in the humorous mode of his famous novel, relying upon comic timing and his keen sense of the incongruities in contemporary life. They often captivate in the same way that Indres Shah's Sufi learning tales do, and the titles alone convey a sense of the interpenetration of India's cultures: "Suta Abandoned," "Mephisto's Daughter," "The Second Mrs. Was Wed in a Nightmare," "Gypsy Jim Brazil to Kumari Kinshino," "Country Life, Country Folk, Cobras, Thok," "...Since Nation Must Export, Smithers," "The Lama Arupa." Whether send-ups of colonialism or lampoons of conventionality, there is a seriousness to Desani's comedy that crosses cultural boundaries and racial identification.


PUBLISHERS WEEKLY: All the characters in Desani's allegorical prose poem ``Hali'' carry on a daily dialogue with Rahu, or Death. The Indo-English novelist fashions a private mythology, as Hali, the hero, learns through his beloved Rooh that love is the only antidote to death and nothingness. First published in 1950 in Britain where it was performed as a ``poem-play,'' ``Hali'' is an ornate, rapturous meditation. Best known for his Joycean novel All About H. Hatterr , Desani reveals his modern side in the 23 conversational stories also gathered here. Set in India, they confirm him as a master of subtle metaphysical comedies, a fabulist, fantasist, moralist and keen satirist of life's follies, absurdities and ego trips. In ``With Malice Aforethought,'' a travel agent professing a desire for spiritual self-realization betrays his me-first individualism. Stories about a suicidal teenager reborn as a worm and a lama's post-death experiences reflect Desani's playful yet questing forays into Eastern spirituality. Chance, karma, and kismet and circumstances toss his characters about like leaves--as in ``A Border Incident,'' where a sentry who saves a drowning boy is promptly punished for his bravery.


KIRKUS REVIEWS: Desani, born in Kenya, educated in India and currently a professor at the University of Texas, offers his first book in some 40 years: 23 stories and fables, along with a dramatic prose poem, that range from bleakness to ironic comedy and from supernatural tales to highly mannered satires. The prose poem—which tells the story of ``Hali,'' who loves Rooh, whose death plunges Hali into grief and a mystical journey— is most noteworthy as an example of private mythology turned into accessible invocation. The supernatural element in many of the other fictions is strong: ``The Valley of Lions,'' for example, is short and visionary; ``Mephisto's Daughter'' concerns a narrator who has access to ``Old Ugly's daughter''; and ``The Lama Arupa'' follows the holy man of the title through ``several states of consciousness'' after his death until he returns as a chicken. ``The Merchant of Kisingarh'' is told by a deceased merchant speaking through his son, a sometime medium. These pieces manage to be both wry and penetrating by turns, while ``The Last Long Letter''—an epistolary tale about a daughter sent away to meet her future groom, a boy who turns out to be visionary—is consistently bittersweet. ``A Border Incident,'' more traditional, tells of a man punished (mildly) for deserting his post to save a boy's life. Desani also offers a mock lecture (``Rudyard Kipling's Evaluation of His Own Mother'') on one of Kipling's more ludicrous compositions, and he closes with the phantasmagoric ``The Mandatory Interview of the Dean''—a madcap satire of bureaucracy and officiousness offered up in a style that is rich and frothily indulgent. A varied collection, impressive in its use of religious and personal mythology—and lushly descriptive of a sensibility and a culture that is part English, part Indian, and uniquely Desani's own.