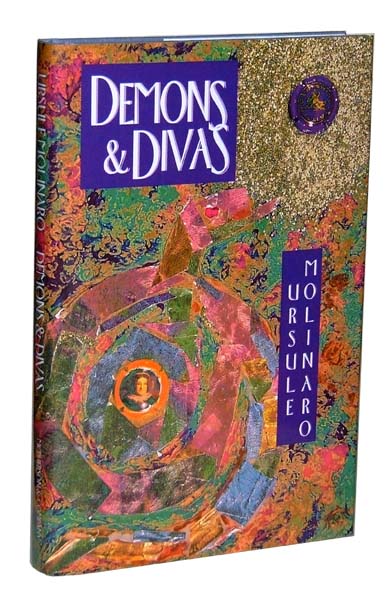 "What good fortune to have three new novels, as exquisitely unruly as ever, from our grande dame of innovative fiction. Ursule Molinaro, wonderfully undiminished in her powers after four decades, has given us one thoroughly modern mother as willful as Clytemnestra, one unpleasant old Southern belle off on her geriatric adventures, and a cunning update of the epistolary form, all in one handy volume I think of as The Portable, Indispensable Molinaro." — Jaimy Gordon

For this trilogy of short novels Ursule Molinaro draws upon a wealth of sources (including Balzac, Flaubert, and Hildegard of Bingen) to transform the grotesqueries of our time into timeless tales.
​"These stinging comedies of manners go right to the root of contemporary hypocrisy. Molinaro's gaze is unflinching, yet hyper-aesthetic. Her kaleidoscopic prose and wry humor make for rich, effortless reading." — Bruce Benderson
Add to Cart
Also available from:
<
>
"Ursule Molinaro's new book is a suite of three sharply satirical novellas, and the title appropriately describes all three protagonists, whose actions range from the diabolical to the operatic. The first novella, 'Angel on Fire,' is about Clara, an extraordinary 5-year-old with a full measure of demonic qualities, most notably a cloven hoof and an unforgivably precocious intellect. Her mother is unable to love her; not knowing what else to do, she sends her little daughter off to Harvard, where Clara immediately starts working on her doctoral dissertation. In 'Saint Boy,' twin sister journalists appeal to the public for supporting letters in their campaign to win sainthood for an obscure artist named Jacob Erskine Wooster, who is said to have attended their school in California. The final novella, 'April in Paris,' follows the tragic footsteps of a woman named April who returns to her native Virginia after 50 years in Paris. April isn't sure how to live in a country that has changed so radically in her absence; in her view, gentility has turned into bigotry. Molinaro has a fine instinct for the grotesque, and a talent for providing laughter in the midst of tears; we are told, for example, that Wooster regularly whipped his daughter, not out of sadism but because "they had lost all other means of communication." — William Ferguson New York Times Book Review (June 25, 2000)

"In Demons and Divas, Ursule Molinaro invites her readers to enter a strange, uncomfortable world, settles them down, and then promptly kicks them out. The first and most engaging story, 'Angel on Fire,' is a multi-layered read, incorporating mythology, gender roles, and a little girl who is much scarier than the "I see dead people" kid. . . . Molinaro ends the story in a grotesque and unexpected twist that leaves it readers both repulsed and craving more. . . .The second story, 'Saint Boy,' takes the form of a hagiography (the writing or study of saints' lives) and consists of 20 letters from different people describing their relationships to a modern day (soon-to-be) saint from California whose questionable qualities are defended in a hilariously preposterous, yet always imaginative style. . . .The final entry, 'April in Paris,' . . . is offered amidst a level of dysfunction that rivals even the best of Woody Allen. . . . Molinaro is like a fiery cocktail: two parts Greek mythology, one part religion, a dash of sex--pour over an ensemble of extraordinary characters and shake until your teeth are jarred. Drink immediately." — Eloise Campbell ACE Weekly (August 24, 2000)

"Compact and carefully constructed, this triptych of short novels -- Angel on Fire, Saint Boy and April in Paris -- focuses on seemingly ordinary characters, viewing them through a screen of mythological and biblical symbols and endowing them with double identities. In Angel on Fire, the Corvo family's balance is disrupted by the arrival of a seventh child and first daughter, Clara, born with a hoof in the place of one foot, precocious intelligence and prescience. From the moment of her birth, Clara is an emotional lightning rod. By age five, she has inspired worship and devotion in her father, brothers and even her kindergarten classmates, but also jealousy and frustrated rage in women, including her own mother. In Saint Boy, Molinaro continues to question what makes a person worthy of admiration, or in the extreme case she documents, what makes a saint. Reading through a dramatic and passionate series of letters from those who knew (or didn't know) him, the hagiographers of the beatified (but not yet canonized) Jacob Erskine Wooster must reconstruct the life of this so-called "everyday saint." In April in Paris, April Mentone née Winslow presents her recollections of her expatriate life in Europe, but April's tenuous grasp on reality gives her a confused memory of her American past. Transporting her characters from Sicily to New York to Athens, from Sioux Falls to Los Angeles to Greece, and from Richmond to Vienna to Paris, Molinaro communicates a sense of displacement and manages to cover vast stretches of time and space. Translator, playwright, and author of 15 novels (Fat Skeletons, etc.), Molinaro reveals the extraordinary in the ordinary, injecting elements of the fantastic into her curious modern fables." — Publishers Weekly (October 18, 1999)

". . . I finally picked it up. I couldn't put it down. Each of its three short novels is a tour de force of style and strangeness. Humorously biting takes on our often blurry perceptions of good and evil, Molinaro's surreal, fabulistic tales unfold as perfectly synchronized jumbles of events and emotions, perceptions and misperceptions. She writes as if she were talking, yet she talks like a highly accomplished writer, revealing details in a precise, necessarily peculiar order. Her non sequiturs sequitur in spades to conjure powerfully sophisticated narratives. — The News & Observer (Raleigh, NC)
To come