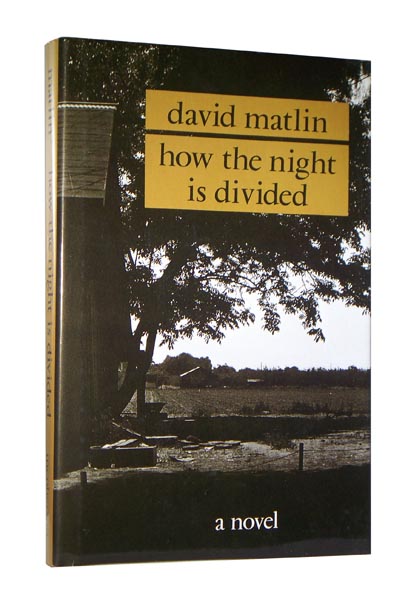 How the Night Is Divided

SKU: 133X
$20.00
$20.00
Unavailable
per item
A story of the Southern California chaparral as it edges toward the Mohave Desert, and of people there in the 1940s and early 1950s, Jews, who were among the first farmers, and who cut out a chunk of it and sometimes disintegrated before the passions of the settlement that made them. They raised and hybridized roses, roses were their livelihood and their passion, but they also smuggled arms to Israel, and were almost murderously divided over Stalin, over Spain, over water. This book is also about an Oklahoma-raised Kiowa Indian, Tom Green, who befriends the farmer and his family, and who is presented against his psychic background of dreams, voices and disappearances brought to this place of rose fields. From the annihilation of the ancient redwoods to the grizzly-hunting vaqueros in live oak canyons, How the Night Is Divided carries western life into the central drama of 20th-century existence. An experience of viscerally emotional and intellectual excitement, here is a novel that takes the reader to the edge, and refuses to let the reader back away.

​Clothbound, sewn, jacketed, 201 pages, 5.5 x 8.5", 1993, 0-929701-33-X
Second printing. (Originally issued as an Autograph Edition of 1000 numbered and signed copies.)
Add to Cart
Also available from:
<
>
"How the Night Is Divided implants a whole network of insights into the relations between the races, into the Spanish origins of modern Southern California, into the role of Jews in the film industry and above all into the paranoid persecution of free agents by McCarthyite investigators. Matlin has discovered an hallucinatory mix of dreams, myths, folktales and exacting factual realism. His hero, Tom Green, moves in and out of the farmer's troubled world, with its origins in Old Europe, and always he reminds the reader of our stake in the preservations of nature's bounty. This is a novel of a new consciousness and energy, by turns lyrical and tough, historically factual and magically timeless, touching, comic and deeply concerned about the consequences of human curiosity." —  Angus Fletcher

"Southern California presents a number of pitfalls for the fiction writer: one can choose Nathanael West's apocalyptic vision, Joan Didion's angst, or Raymond Chandler's 'great wrong place' and still not describe it with the attention to detail and mythic depth that David Matlin lavishes upon the subject." — Book Press

"Matlin is a poet who has translated his poetry into fiction. How the Night Is Divided is not easy reading, but it is powerful and provocative." — Columbus Dispatch

"This novel is an amalgam of elements so beyond the usual novelistic purview that it convincingly projects the conviction of genuine experience. . . .The element that holds it all together is water, put to use with irrigation to create cultivation in the midst of a geographic and historical environment that would seem to dictate nothing but brutality and crudeness. This is a myth of the real West . . . The writing is dense and poetic -- not the fak-o poetry of literary imposition, but the poetry that comes from a tough adherence to the texture of a strange, even fantastic reality. This book bites off a chunk of our culture that seems too big to chew, . . . and digests it for us elegantly." — Ron Sukenick

"There are unforgettable scenes in How the Night Is Divided ; haunting images that almost scorch the printed page." — Washington Post Book World

"In his first novel, Matlin explores with almost mystical intensity a clash of cultures. . . .[His] introspective prose is haunting . . ." — Publishers Weekly

"His prose is wholly original, at times like a weird translation of another language, and yet has echoes of some of the greats — the dreaminess of South American mystics, the headlong thrust and humor of Henry Miller, a pinch of Pynchon, the fine sensuality of Proust." — Woodstock Times

"How the Night Is Divided reminds us that some things never change. The land is inhabited by flows and intensities which have their way with us even as the hermetic malls and media environments cover the surfaces. This book will permanently change your experience of the world." — Don Byrd

"David Matlin's sincerity, lyricism and, above all, passion have a stunning force. The desert landscape that dominates the consciousness of his narrative comes fully alive; mystical, mysterious, haunting, it makes us believe the mythology it has inspired. How the Night Is Divided is a great achievement, and a beautiful powerful book." — Irini Spanidou (author of God's Snake)

"This has as much to do with history as with fiction (Matlin also packs in an essay on rose tending from ancient times to the present), but its sense of place is dead to rights." — Kirkus Reviews

"David Matlin's How the Night Is Divided confirms what writers as different as Baudrillard and Don DeLillo have been suggesting recently: that it is in the blasted, surreal magnificence of this country's deserts where we can locate the most resonant sources of our current culture's defining dreads and longings. And certainly at the most basic level, Matlin has created a wondrously vivid and intensely personalized "desert book" worthy of comparison with those of Bowles, T.E. Lawrence, or Ed Abbey. Even more impressive, however, is the remarkable voice Matlin has created here to conjure up an ominous and yet luminous portrait of the violent and creative energies which are always vying for possession of the daily lives and imagination of Americans. Matlin's is an obsessive voice, at once utterly unique and yet hewn roughly out of American idioms, whose wild flights of sensual music, blind rage, and word-drunk poetry bleed out onto the page, sentence by sentence, with a relentlessness and beauty that recalls the earlier obsessive voices of Melville, Whitman and Faulkner. In the age of minimalist pleasures and cool detachments, Matlin reminds us how exciting it can be to sit down with a book whose risks are live rather than memorexed — and whose rewards are something greater than the funny money that passes for currency among most readers and writers these days." — Larry McCaffery

"[How the Night Is Divided] unleashes a love of life that entrances the reader and makes one pine for the desert." — Small Press: The Magazine of Independent Publishing

"It is refreshing to see a novel taking the long view, telling a story as if it really matters. . . . Here, the proverbial first novel autobiographical subtext is thankfully submerged. How the Night Is Divided even has things to teach us. . ." — L.A. Reader