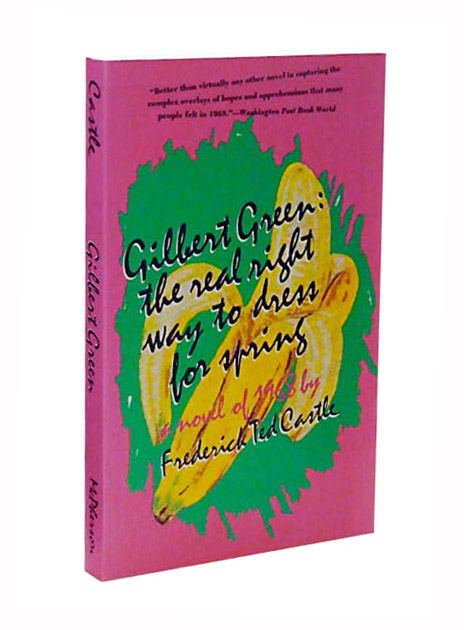 Gilbert Green : The Real Right Way to Dress for Spring

A tragi-comic story of rock'n'roll and madness, capturing the quintessential idealism of 1968 meeting the hard edge of American reality. Gilbert Green is an attuned but innocent genius, a dreamer, a poet and filmmaker, not unlike Andy Warhol, around whom a young entourage of adventurers gathers. Gilbert Green is a novel in the form of a dream in the form of a novel, much like the year 1968 itself.

​"Here is the second masterpiece from the ineffably original Frederick Ted Castle. . . . The portrait of our life as it looked in the late '60s is rendered with such vivid efficacy that those who knew the time will be smitten with a mighty nostalgia for it, while those who did not will curse themselves for having been born too late." — Harry Mathews

"A compound of all the in-between moments that memory tends to edit out: the off nights, the bar talk, the transient fantasies. Since the milieu he's writing about was peculiarly enamored of such ineffable moments, Mr. Castle's method couldn't be more germane. . . . Gilbert Green
demands almost unlimited indulgence from the reader, but it pays back with the real air of a gone time, captured live." — Geoffrey O'Brien, New York Times Book Review
Add to Cart
Also available from:
<
>
"It is a realistic novel, but the sense of reality it aims at has little or nothing to do with the worn-out conventions of novelistic realism.... The miracle of this novel is that it still seems fresh as spring, it still sings." — John Ash, Voice Literary Supplement

"Here, in short, is a 1960s paradise... History has recently ended, and there is nothing left to do but play. Maybe my memories of the 1960s are a little bit mistaken, but I recall a lot of us actually believed this stuff. Ted Castle renders that belief with visionary fidelity. Castle also renders the loss of this paradise. ...What seems to me most extraordinary about Gilbert Green, more than the goofy humor and the sometimes startling turns of the plain-speech prose, more than the dead-accurate set pieces of 1960s dialogue and the insider's account of Andy Warhol's Factory, is Castle's success in making the reader feel that the climax is tragic." — The Nation

"Gilbert Green has, in short, much to recommend it: its sixties humor and surreal Burroughsian dreams, stretches of language poetry and an on-the-road subplot, its improvisational defiance of novelistic conventions, and moments when the amphetamine-spiel prose gets something just right, as when a character looks down upon a naked woman in bed in a dark room and notices that 'the blackness of her whiteness was intense.' In Castle's elliptical excursion into the way we lived then can be found an answer to why that time of potential greatness faltered tragicomically. Perhaps all the answer we need is here in this one remark: 'They felt weak with laughter and drained by fantastic visions of the past and of the future. They had had a great time on the town and then they fell asleep.'" — Brooke Horvath, The Review of Contemporary Fiction

"Gilbert Green succeeds better than virtually any other that comes to mind in capturing the compex overlays of hopes and apprehensions that many people felt in 1968." — Washington Post Book World