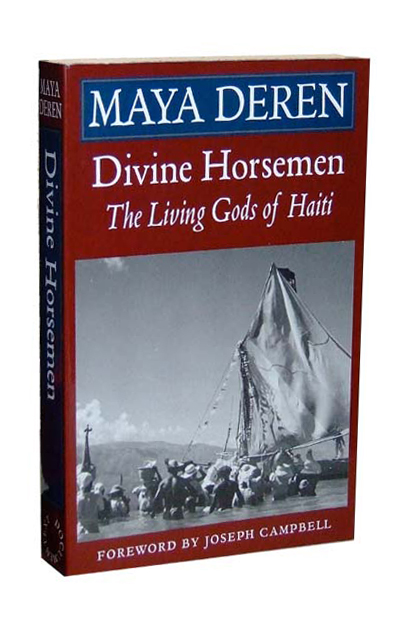 A German language edition is published by the Austrian publisher ProMedia.

An Italian language edition is published by Il Saggiatore.

This is the classic, intimate study, movingly written with the special insight that comes of direct encounter. First published in 1953 by the fledgling Thames & Hudson firm in a series edited by Joseph Campbell, Maya Deren's Divine Horsemen is recognized throughout the world as a primary source book on the culture and spirituality of Haitian Voudoun. The work includes all the original photographs and illustrations, glossary, appendices and index. Our authorized edition includes the original Campbell foreword along with the foreword Campbell added to a later edition.

Add to Cart
Also available from:
<
>
"Divine Horsemen is the result of vast fieldwork and personal research in Haiti, and its findings are well and systematically drawn up at considerable length."--Times Literary Supplement
"Her account of a sea ceremony in honor of Agwé, piling detail on detail, is as objectively narrated as an episode in Homer, and as moving."--New York Times
"Her prose has the pulse beat of poetry. …The description of her own experience among these people…is a breathtaking narrative."--Dance Magazine
"The most astonishingly unorthodox treatment that has appeared from any writer."--N. Y. Herald Tribune
"The photographs are probably the best on the subject that have so far appeared."--The New Yorker
"An authentic and thrilling book."--Time and Tide
"Powerful writing."--New Statesman & Nation
"An important contribution."--Library Journal
"Highly recommended."--The Nation
"There are lessons to be learned about Voodoo the way Maya Deren makes you know about it." -- Village Voice
"Generally considered the best book ever done on Voudoun mythology." — New York Post
"More than thirty years have elapsed since Deren completed her filming, her audio recording, and her monumental ethnography of Haitian Voudoun. But her work . . . continues to move and inform." — Journal for the Society of Ethnomusicology