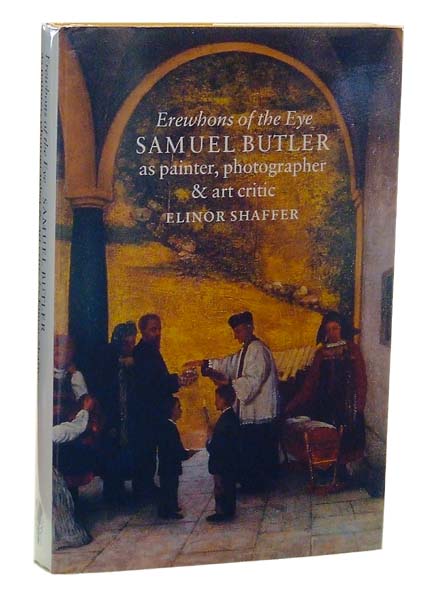 Erewhons of the Eye : Samuel Butler as Painter, Photographer, and Art Critic

​If you can find this book elsewhere, good luck and God speed. We've been distributing this book in  North America for a number of years, and it seems that we have the last 100 copies of this very remarkable monograph, but we haven't changed the price for the last 15 years. Aficionados of the history of photography especially will be amazed, we predict, by what's been left out about Butler from most compendiums.

Samuel Butler (1835-1902) has long been recognized as a great novelist, author of Erewhon and The Way of All Flesh. This groundbreaking book reveals in addition a pioneer of photography and art criticism. Superbly illustrated, and including 80 rare photographs never before published — Erewhons of the Eye demonstrates how Butler made a substantial contribution to both the practice and the criticism of the visual arts. As Elinor Shaffer writes, "One of the most compelling interests of Butler's life in art is the sense it conveys of how tortuous and unexpected the route may be to the styles of the next generation. . . . The primitive and the naive, children's painting, 'art brut,' the fantastic map, the cartoon and the caricature, ironization of styles, verist sculpture, the photograph, and the literary text linked to the visual illustration in such a way as to lift and lighten the authority of the text alone — all these were explored, promoted, collected or practiced by Butler."
Add to Cart
<
>
"As Elinor Shaffer demonstrates in her stimulating study, Butler was not just the debunker of Victorian values in The Way of All Flesh or the pessimistic, satiric prophet manque of Erewhon, Erewhon Revisitedand The Fair Haven, but an artist, photographer, innovative art critic, and provocative classical scholar . . . her achievement lies not just in the fact that she has greatly widened our knowledge of the man's interests and their context within the history of ideas, but in having produced a work of cultural history which, in the spirit of Butler himself, splendidly denies the possibility of neatly classifying either the individual, or the whole tendency of late Victorian aesthetic life" --Times Literary Supplement

"As this critical-biographical study makes clear, Butler was ... a pioneering photographer, an interesting minor painter, and an important force in art criticism." — Washington Post Book World

"A significant addition to the literature on Butler [and] to the broader fields of Victorian art, photography, scholarship and culture, and to the relationship between pictorial and literary creativity." — Choice

"Though Butler's name may be unfamiliar to today's American audiences [for photography], he emerges as a major artistic influence of the pre-Modern era." — Daile Kaplan, Photographia

"Erewhons of the Eye is an unusual, subtle and exceptionally interesting book" — Times Higher Educational Supplement
Dr Elinor Shaffer is a Senior Research Fellow at the School of Advanced Study (Institute of Germanic Studies), University of London, and a Distinguished Fellow of the European Humanities Research Centre, Oxford. She was educated at St Hilda′s College, Oxford and Columbia University, where she was awarded a Ph.D. in English and Comparative Literature. Dr Shaffer has held positions at the University of Berkeley, Clare Hall Cambridge and the University of East Anglia. Visiting Professorships have taken her, among other places, to Brown University, Stanford University (USA), Freie Universität Berlin, and to Zurich and Stockholm.