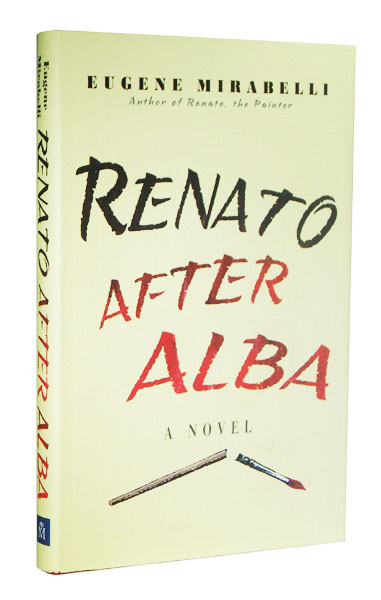 ​Grief astonishes. Ten years after the conclusion of Renato Stillamare’s defiant confessions in Renato, the Painter, Alba, his beloved wife of fifty years, dies without warning, and the blow leaves him in pieces. When he resumes his narrative, this larger-than-life artist has been reduced to a gray existence of messy confusion — broken belief, crazy hope, desperate philosophy. A man of fragments but still an artist, he assembles a collage of scenes of life with and without Alba, recollections of his eccentric Sicilian-American family, encounters with well-meaning friends, daily attempts at resuming his former life, and metaphysical railings against any deity capable of destroying what it has created. In Renato After Alba, the deepest sorrow is not merely lacerating, outrageous, heart-rending, and tragic, but also, for someone so completely human as the enduring Renato, touchingly comic. And miraculously beautiful in its astonishment.
Add to Cart
<
>
"In this sequel to Renato, the Painter, Mirabelli poignantly describes Renato’s intense grief and loneliness since his beloved wife, Alba, died. He furtively seeks out human contact with friends, family, and mere acquaintances to stay in touch with the world. Gradually, he turns to the philosophers his Uncle Zitti quotes, especially Lucretius. Selections from On the Nature of Things by the ancient Roman poet and philosopher gives Renato great consolation as he considers the role of human life in the grand scheme of existence. True to his name, Renato is again reborn and attains a peaceful acceptance as he realizes that “the gods have given us love instead of immortality.” His mature reflections on life and nature make this work more serious than the earlier one, which is full of Renato’s comical escapades. Verdict: This reads well as a stand-alone but will be better appreciated by those who have read both novels. Renato is a Tristram Shandy–like character who achieves a firmer position in reality in this beautifully executed work of prose.— Library Journal, Lisa Rohrbaugh, ­Leetonia Community P.L., OH

Mirabelli’s ninth novel is the affecting, bittersweet rant of an aging painter who tries, and fails, to come to terms with the death of his wife. Renato Stillimare, a foundling left on the doorstep of a philosophical band of Sicilian-Americans (and the subject of an earlier book of Mirabelli’s), has grown up and old listening to his family discourse on the meaning of life, of atoms and shadows, and God and His intentions, so he is hard-wired in his dotage to wax philosophical on the whereabouts of his beloved, the deceased Alba. Having once admitted he painted to “give people solace for being human,” he now finds it impossible to overcome his grief to make art again. He tries to carry on, his children and grandchildren helping as much as they can, but he wakes up each day more often than not all but inconsolable. Renato conjures memories of discussions his uncles and father had over hearty meals concerning the nature of things, desperate to come up with a formula for understanding why we were put on this Earth, by whom, and where we disappear to when it’s over. He visits coffee shops in Boston, rekindles a few friendships that tickle his aging libido, but nothing feels quite right anymore. In the end, he can be sure of one thing only: that he was named well, "stillamare" in Italian meaning a drop in the ocean. The amusing, navel-gazing prose goes a bit too deep, but the reader feels such affection for Renato—indeed, an appreciation for his mindfulness—that when he finally declares, “It’s important to have wine.... So you’ll know it’s not breakfast,” you can forgive him anything. — Publishers Weekly

The question here is how to go on after the death of a loved one with a life so seemingly empty yet still filled with family, friends, and the remnants of years devoted to art. . . . But art won't let him go. A major exhibition begins to take shape, revealing a chance yet for healing a deeply wounded heart. . . . [A]n affecting look at memory, loss, and love. -- Kirkus Reviews

A journey through intense grief is at the heart of Eugene Mirabelli’s deeply affecting novel, Renato After Alba, a standalone follow up to Renato the Painter. Eighty-something Renato Stillamare is grieving the loss of his beloved wife, Alba. Renato was a painter, but after Alba’s unexpected and painful death, he lost his muse and his passion for his art, along with his will to get up in the morning. . . . The prose is sparkling, and Renato is a lively narrator. He yells, he cries, he swears, he grieves, and although his spirits have plummeted, he gets up every day, mingling with a colorful set of friends and family, trying to make sense of his new, unwanted reality. Despite Renato’s rage at his attaining the unhappy status of widower, the reader senses his feistiness and suspects that the book will, if not end happily, at least conclude with Renato’s somewhat triumphant re-emergence back into life, albeit on an uncharted path. For a book focusing on the effects of grief, it is unexpectedly uplifting, most likely because Renato is an utterly charming and empathetic protagonist. . . . It is fulfilling to accompany Renato on his journey of transformation, to read about the easing of his grief, and to work with him toward a gradual rewriting of his life’s story.— Foreword Reviews, Hilary Daninhirsch
An excellent podcast interview with Gene by David Wilk on WritersCast.