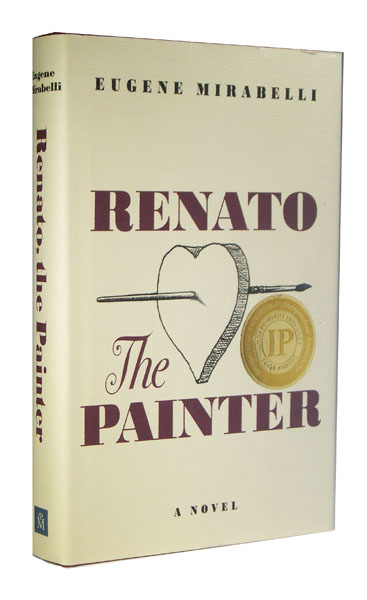 ​In his own mind Renato Stillamare may be the best painter of his generation — at least, he doesn't know anyone better — but his canvasses aren't in demand, and haven't been since his last show at a Newbury Street gallery twenty-five years ago. Now 70, and retired from teaching at Copley College of Art, Renato has retreated to his Boston studio where he is defiantly painting, painting, painting, determined to be rediscovered. Renato is a lusty, large-hearted, smart, opinionated, and occasionally intemperate man whose children (including a daughter by his accidental mistress) are all grown up and dispersed, whose best friend (whom he misses more than anyone) died years before, and whose maddening wife (the love of his life) lives in a condo on the opposite bank of the Charles. But Renato's life is about become much more complicated when the jewelry-pierced daughter of a former student shows up at his studio with her little four-year-old boy in tow. Renato's story, which he unabashedly recounts with flair and verve, is about extraordinary things happening to an ordinary man living life to the fullest. A funny, touching, even magical novel, Renato, the Painter deservedly takes its place alongside such classics as The Ginger Man and The Horse's Mouth.
Add to Cart
<
>
"As is the case with many first-person novels, the hero of Eugene Mirabelli's Renato, the Painter is a foundling. When a baby appears on the doorstep of Bianca and Fidele Stilamare, they name the child Renato--Italian for "reborn"--and he grows up to become an artist whose fine work has failed to receive the accolades it deserves. (The same might also be said of Mirabelli himself.)
"This [stand-alone] sequel to earlier Mirabelli novels like The Passion of Teri Heart and The Goddess in Love with a Horse is a powerful, life-affirming story, a lusty, bawdy, hilarious romp through life as recounted by Renato in his old age. As a young boy, Renato enjoyed reading one of the few books in the Italian immigrant family's home: Benvenuto Cellini's Autobiography. As he grows up, his love of girls, then women, then drawing and painting, grows stronger and stronger until he feels he must devote his life to them (all of them). He marries, but that doesn't go well; although he loves his wife deeply, they remain apart--closely apart, that is, on opposite sides of Boston's Charles River, which only makes their relationship more hilarious and frustrating.
"Later, a young woman, Avalon, the daughter of a close and dear friend, comes along with her son Kim. Renato just wants to help her out, but their relationship gradually evolves into something tender and beautiful: "Her hand glided from my shoulder to my flank with a caution so gentle it startled, she had a vigorous embrace and such tenderly inquisitive fingers as to doom a young man to her touch, and I was grateful to be old." Mirabelli's lovely, poetic prose, which fills his characterization of Renato to its brim, is a joy.
"Looking back, I'm baffled that I haven't done better," Renato reflects. "I don't mean painting; I've done all right painting even if nobody knows it. But I could have given more time to my friends, could have listened more and complained less, could have been more generous to everyone." Renato has done well, has lived and loved, and has served his mentor Cellini very well indeed. Shelf Talker: Once you've read this lovely novel, you'll be hunting down the rest of Mirabelli's stories, which form an extended history of the fictional Cavallu clan." — Tom Lavoie, Shelf Awareness

“In this portrait of an artist full of lust and rage, Eugene Mirabelli once again marries the realistic and romantic modes. Renato, the Painter offers us the intimate workings of an aging man at the height of his powers who fears that they will ebb; he and his women and paintings are vividly rendered: fierce, fine.” — Nicholas Delbanco, author of Lastingness: The Art of Old Age

“A lively comic romp through the early high promise of the painter Renato, and his late-life desperation over the art world's non-recognition of his work. Age bends and fate twists this artist, but he carroes on with his 'perishable art and human love'--the indefatigable artist as his own work of art.” — William Kennedy

“This generous, sprawling, fleshy novel of a life lived among lovers, friends, olives, wine, bread, and prosciutto, is a fresco of Sicilian-American-New England life. It is also an American story that shows just how a first generation of immigrants branch from village craftsmen to engineers and artists. Renato, the grumbling bohemian painter, is the genial pater of an unusual famiglia, who is still propelled by immigrant optimism in the age of computers. He is a not-quite-successful painter or husband who loves both painting and sex with greedy bonhommie until, as an old man, he finds his imperfect life quite adequate in midst of a motley nouveau family.” — Andrei Codrescu, author of whatever gets you through the night: a story of sheherezade and the arabian entertainments.

"In Renato, the Painter, by Delmar resident Eugene Mirabelli, the unity of the narrator’s life and vocation is demonstrated in his descriptive habits: 'A handsome face seemingly drawn from black lithograph crayon' or, 'an Art Deco face, composed of a few smooth planes.' Retired from teaching at a second-rate art school, Renato—70 and newly sporting a white beard—is desperate to show in a selective Boston venue. When an interested gallerist paying him a compliment confuses Klimt and Schiele, a dismayed Renato offers his readers an anecdotal tutorial on the difference between the two masters. That his own work will not outlast him is a crushing realization, yet he has managed to keep his certainties intact: 'It’s a long lonely trek where you paint not for viewers who never come, but simply because you can, because you’re good at it.' Never having taken a theoretical slant, he is irked that computer art and feminist critique take up wall space he covets. Old associates have triumphed by staying saleable or having accolades sufficient for a Globe obituary. His closest friend, whose art discourses sustained him, recently died, and Renato’s wife, who covers art for the New England Newsletter, has never vouched for his work.
"Undaunted, Renato still makes love to the two mothers of his three college-educated children; his intake of coffee, biscotti, zabaglione, Asti, and Cinzano is documented with a bittersweet charm. A story slowly brews when a young homeless woman with a child moves into his studio, disrupting his routine. Grudging in the role of hero, our memoirist sees that his life is not without laurels."--Marx Dorrity, Chronogram

"This wonderful novel begins and ends with a large, vibrant Italian family gathering. In the first scene, an infant is found on the doorstep of the Cavallu family, adopted, and named Renato—or "reborn." In the final scene, seventy years later, Renato and his wife and his lovers and his children and grandchildren are at a picnic—and this engagingly odd family is bursting with vitality. As he says, "Everybody's pregnant at once." In between, Renato's life—as told by him—is a series of adventures in lust, love, longing, ambition, frustration—and painting. Always painting. There are many remarkable aspects to this novel, but what most strikes me is Mirabelli's ability to create vivid and believable characters of both sexes and all ages, from Renato at seventy to Avalon, a heavily pierced young woman who comes to live with him in his studio, and her eight-year-old son, Kim. Mirabelli creates a huge cast here and all of his people are thoroughly human, each one complex, full of contradictory desires, fully alive. And Mirabelli writes some of the best prose in contemporary fiction: it is sharp and precise, deceptively simple. Gorgeous. It's the writing of a man who has spent more than fifty years refining his craft. Like Renato, Mirabelli is an artist at the top of his game and a man old enough to know that life is not forever and that we can never have enough. The book, finally, seems to me to be about what we make in our lives, what we do with the years we are given. Renato makes love, makes mistakes, makes babies, makes pasta, makes art, makes zabaione, makes a remarkable family. He never stops wanting and he never stops making. What Mirabelli has made here is a little miracle: a book that is sexy and funny and touching and totally, totally memorable." — Hollis Seamon

"They say an unexamined life is not worth living, and so at 70 years of age, Renato Stillamare is about to put his life under the microscope. Renato begins his tale with the day he was found on the steps of Fidèle and Bianca’s home. Renato takes us on his journey, from a young boy who fell in love with art to his lustful teenage years where he meets the woman who will one day become his wife. Fast forward to the present. Renato now lives in his studio across town from his wife. When the daughter of an old friend shows up at his doorstep with her son and a face full of piercings, his life becomes even more complicated, and all he really wanted to do was paint.
Renato, the Painter is an engaging character study of one man’s attempt to live out his days doing what he loves. Author Eugene Mirabelli writes beautiful descriptions with the skill of a master painter. He has created a character that is deep, frustrating and ultimately very human. The predicaments that Renato manages to find himself in shows us an old man with a youthful spirit that may have missed some vital life lessons on his journey. His story is paired with well-rounded characters and will leave the reader with lots to think about as they contemplate their future or even their past.  . . .the book is exceptional, and I would strongly recommend it to lovers of memoirs or art." — Compulsion Reads

"We have our passions, and we so desperately want to be recognized for our passion. Renato the Painter is a novel following aging Renato Stillamare as he seeks for one last shot at glory as an artist, a painter, as his world seems to pass him by as he grows older and older. Rushing to get his work noticed and dealing with his own family's goings-on, Renato the Painter is a novel that resonates well with many a reader, much recommended and not to be missed." — Midwest Book Review

"Eugene Mirabelli's Renato, the Painter won the top prize at the 2013 Independent Publishers Awards. It is easy to see why. This splendidly layered comic novel dramatizes perhaps more effectively than any other fiction I have read the tribulations and joys experienced by a serious artist—in this case, an Italian-American painter named Renato Stillamare as he loves and works and battles his way through his seventieth year." — Lawrence Kinsman, Mercury Book Reviews
To come