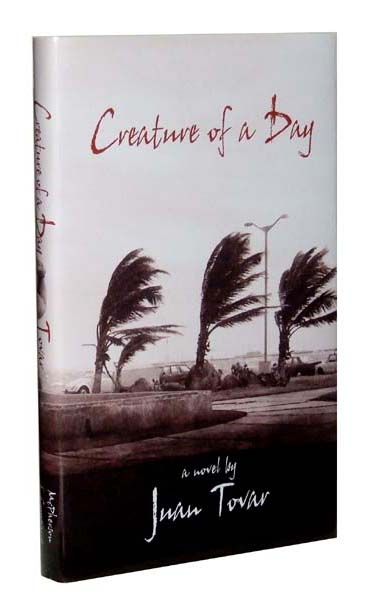 Creature of a Day

Winner of the Kayden Translation Award, University of Colorado-Boulder. Foreword Magazine "Book of the Year" 2002 Bronze Medallion for Translation.
​
Border crossing may be literal, figurative, imaginary, symbolic or psychological, or, as in the Mexican novelist Juan Tovar's Creature of a Day, all of these at once. This richly conceived prose fiction (a novel in the freshest sense) enchants and seduces the reader with a beguiling tableau of tales told in a language contemporary yet resonant of Calderón de la Barca, Chaucer and Shakespeare. Creature of a Day is inhabited by actors and priests, murderers and harlots, mendicants, merchants, pilgrims and storytellers. Themes of isolation and migration emerge in the wit and repartee of these characters; at the same time, in a stream of literary hallucination that flows from Lautreamont and Strindberg to Beckett, Cocteau, Calvino, and Borges, Creature of a Day washes across the North American consciousness. This award-winning translation by Leland H. Chambers reflects a vital new Mexican literature.
Add to Cart
Also available from:
<
>
—[Reviews of this edition]

"Creature of a Day is Mexican novelist Juan Tovar’s first book to be translated into English. This edition also contains material that is not yet available in the original Spanish. Tovar’s previous work consists of four novels, six collections of stories, and two dozen plays. It is not surprising, then, that this work combines elements of all the above. The result, a novel in the loosest sense, reexamines the genre and approaches it as a fluid interaction of several short-story strands. On the one hand, the novel has a modern frame-tale narrative that is peopled with characters borrowed loosely from Grimm. On the other, it is a pastoral drama scripted with a lyrical quality that owes much to Chaucer and the medieval poets. It subscribes to multiple theologies in its exploration of the rites of pagan and Christian ideologies. It is equally concerned with both universal mythologies and those found within the constructs of the world Tovar creates. The internal world of the novel is dominated by the labyrinthine strands of the multiple themes. .... The novel’s exploration of consciousness and belief in relation to the legends Tovar creates and manipulates contrasts with his explicit reminders that we are being told a tale. This metafictional quality has the alienating effect of a character aside to an audience, thus cleverly reinforcing the notion that what we are dealing with here is not, in fact, prose after all. Whether ballad or drama, Tovar successfully re-creates a pilgrimage in words. His band of pilgrims highlight the freedoms that lie in migration but also, conversely, the need for a foundation in belief. --Review of Contemporary Fiction

"Calling this book a novel is a stretch . . . It is more useful to think of it as a 157-page, often startlingly beautiful dream. The text breaks natural laws at will and whim, shuffles settings like cards, changes speakers in mid-sentence, and makes a shambles of time. . . . Of course, Tovar is no fool. One of his characters lampoons the usual plot devices writers rely on: 'Still, a shortcut can always be found,' he says, 'leave it to your faithful servant, actually a prince in disguise who loves you in silence and keeps an eye on you with averted face. I cannot reveal my true rank, you know, because it is tarnished by a terrible secret that you will eventually discover when the story makes clear, and if that never happens, I will just forget. We will still exchange gentle discourse, here or at the end of time.' — Vincent Czyz, WBUR Arts/wbur.org

[Reviews of the Spanish editions]

"Creature of a Day is the story of a spiritual pilgrimage filled with revelations of the soul, written with tension and brilliance unique in modern [Mexican] literature. The prose is akin to the emotional texture of poetry, reminiscent of sacred literature; at once a textual initiation and the allegorical representation of crossed destinies, Creature of a Day fills the reader with astonishment and emotion. Tovar manages to marry intelligence to passion, ultimately resolving, in every memorable page, all the imagination and plasticity of his narrative project." — Universidad Autonoma de Puebla, Coleccion Astericos

"The stories of Juan Tovar are an elaborate web of interconnected destinies circumnavigated by the brevity of a world about to end. Creature of a Day is a voluptuous rose, flowering with lyrics from an ideal dream where fantasy meets and becomes lost in the everyday meandering of its characters, a song teeming with an interior and steady-handed sarcasm." — Eduardo Altuzar, Diaro de Mexico

"Creature of a Day is a revisitation to the original fire and history of Western spirituality, to the medieval marriage of pagan sentiment to the fervor of early Christianity. At the same time cryptic and pristine, even monastic in its mystical unraveling of the tragic sense of life, the novel presents itself as a labyrinth or a rose, as a beautifully constructed symmetry built upon twists and turns and shade. . . . The result is a book of peculiar beauty, fluid and morose, [sublimely] grotesque, in a bewitching style and charged language, filled to capacity with exaltation. Creature of a Day is a handsome pastiche of our world as an island drifting in the ocean of the Universe." — Ricardo Pohlenz, El Semanario

"Tovar's obsession is with the 'devastating whiteness' of a virgin sheet of paper about to fill itself with signs, with the residual fuel, the Promethean fire that gives birth to us creatures of a day each dawn, until finally we converge and fall into the night, blackened full with the day's procedure, and collapse and return to ash." — Esther Seligson, Revista Siempre