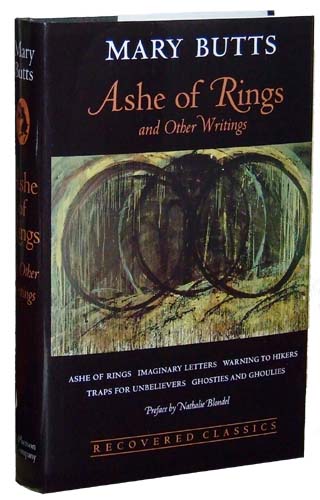 Ashe of Rings and Other Writings


​Ashe of Rings and Other Writings is our fourth Recovered Classics edition collecting the works of Mary Butts. This volume features Mary Butts's first published novel, Ashe of Rings, which depicts psychological turmoil during the First World War in the form of an occult drama. In addition there is an epistolary novella, Imaginary Letters; a pamphlet essay on disbelief and faith, Traps for Unbelievers; a pamphlet essay on urban naivete, Warning to Hikers; and an essay on ghost fiction in English literature, "Ghosties and Ghoulies."


​The English novelist, poet and critic Mary Butts (1890-1937) is one of the most enigmatic of the early Modernists, and the last great lost writer of the era. During the 1920s and 1930s she was as well-known and highly regarded in England as her now more famous contemporaries: H.D., Katherine Mansfield, Mina Loy, Virginia Woolf, Dorothy Richardson, Jean Rhys, Djuna Barnes, Kay Boyle. She was a writer of high energy and an original style, and possessed particular insight into the generation which survived the First World War. McPherson & Company has been reissuing her works in uniform, newly edited volumes since 1992.
​
Add to Cart
Also available from:
<
>
"Mary Butts reflected many of the fascinations and themes of the early Modernist movement (including an interest in the occult and spirituality, a belief in the regenerative power of the land, and a conviction that obsessive love offered a perfect metaphor of the creative process) in her fiction, poetry, and criticism, as this collection of her miscellaneous pieces once again demonstrates.... Ashe of Rings, Butts's first novel, finds, in a young woman's struggle to preserve an ancient shrine in the British countryside, a kind of redemption in the wake of the First World War. Butts also addresses the complex spirituality of nature in a vigorous essay included here, "Warning to Hikers." "Imaginary Letters," a novella, traces the course of a young woman's hopeless infatuation for a rootless young Russian emigre. "Traps for Unbelievers," an essay in defense of faith in the unseen, and "Ghosties and Ghoulies," an informed and perceptive survey of the genre of the ghost story, demonstrate Butts's wide interests and her energetic, vivid prose style. [Verdict:] A useful addition to the shelf of this little-known British writer's work." — Kirkus Reviews


"Butts is little read these days, which is unfortunate. This English novelist, poet, and critic was part of the crowd of international writers living in Paris between the two world wards, and she had a good reputation back then. This anthology should help librarians bring Butts anew to the attention of appreciators of serious writing. This is the publisher's fourth Recovered Classics edition, restoring Butts's work to print. It includes her first accomplished novel, Ashe of Rings; a particularly interesting epistolary novella, Imaginary Letters; two pamphlet essays on social issues; and an essay on ghost fiction. (According to the publisher notes, this is the first appearance of the novel in the U.S. since its initial 1926 publication and the first U.S. publication of all the other pieces in this grouping.) Butts was a quirky but ultimately brilliant writer, very distinctive in style and imagination; she remains a thrill to read." — ALA Booklist

"This volume containing works long out of print, along with Nathalie Blondel’s biography (reviewed by Irving Malin in the fall 1998 issue of RCF), prepares the way for a reassessment of Mary Butts’s place in modern British literature. Portions of Ashe of Rings are set against the backdrop of World War II and the novel, written in 1918-19, should be viewed alongside Forster’s Howard’s End (1910), Ford’s The Good Soldier (1914), Lawrence’s Women in Love (1920), and Woolf’s Mrs. Dalloway (1925). Butts’s voice is distinctive, her language innovative. Her characters (Anthony, Melitta, Vanna and Valentine Ashe; Judy Marston; the Russian artist Serge Fyodorovitch; and soldier Peter Amburton) are caught in a net of competition, personal struggle, and jealousy. Creative instincts clash with destructive impulses. Supernatural, mystical forces lie just below the surface, centered around the Rings, a prehistoric site near the Ashe family estate, a sacred place where we feel supernatural events once occurred and could again transpire. The remaining shorter pieces elucidate the ideas and beliefs informing Ashe of Rings. Composed in Paris seven years after the Bolshevik Revolution, “Imaginary Letters” are written to the mother of a Russian homosexual exile named Boris by a young woman who had tried to care for and connect with her son. “Warning to Hikers” and “Traps for Unbelievers,” essays published in 1932, respond to familiar modernist concerns. The first decries the loss of our ability to perceive beauty, the psychic disruption caused by urbanization, the myth of equality, and the contamination of nature by indifferent hikers from the cities; the second addresses our attempt to get along without religion, suggesting, it seems, a return to more primitive spiritual origins. “Ghosties and Ghoulies” is an overview of how the supernatural has been treated in literature. 'We have been careless lately what spiritual company we have kept; in our choice of ghostly guests,' Butts concludes." — Allen Hibbard, The Review of Contemporary Fiction