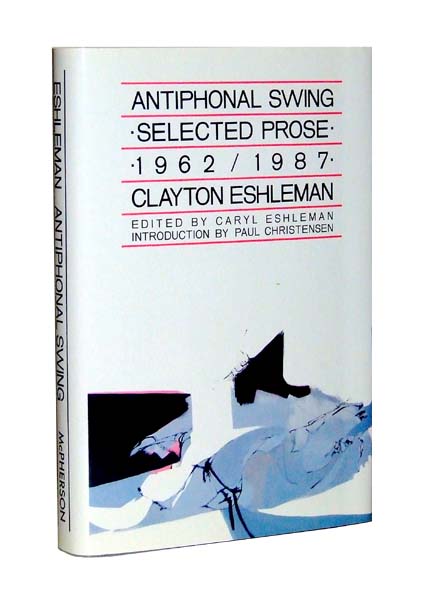 Thirty-four essays, interviews and prose poems by this famous poet and translator explore theories of the contextual fabric of World poetry, and describe the development of his own unique poetic vision in a penetrating re-evaluation of the roots of consciousness. This volume includes selections from Eshleman's dialogues with James Hillman, as well as introductions from his two most important volumes of poetry. There is also a discussion of the narrative elements in Upper Paleolithic cave art; a provocative essay on the art of translation; and critical appraisals of such poets and artists as Gary Snyder, Leon Golub, William Bronk, Charles Olson and Allen Ginsberg.

Terrain of the Residencias
A Visionary Note on Cesar Vallejo and William Blake
The Gull Wall
fron The Sixpack Interview
Gargoyles
from The Atropos Interview
Terrestrial
Thinking About Gary Snyder
Doing Caterpillar
from A Letter to American Poetry ReviewElizabeth Bishop
WIlliam Bronk
Charles Olson
Out Climbed Artaud
Golub the Axologl
Vatic Sores
Proteus, Poetic Experiment, and Apprenticeship
Placements I
A Note on Aime Cesaire
Introduction to Fracture
A Kind of Moisture on the Wall
Notes on a Visit to Le Tuc d'Audoubert
Seeds of Narrative in Paleolithic Art
A Visit from Hart Crane
The Bowery of Dreams
from An Interview with Gyula Kodolanyi
Response to Mary Kinzie
A Discussion with James Hillman on Psychology and Poetry>
Vallejo and the Indigenous
Aime Cesaire's Lost Body
The Translator's Ego
Placements II
Chapter 7 from Novices
The Stevens-Artaud Rainbow
Appendix
Index

"This selection of critical prose attests not only to the geographic, cultural, chronological and stylistic breadth of Eshleman's interests but also to his passionate and at times obsessional approach to 'what matters.'... The very antithesis of a scholarly handbook to the 'canon-making textbooks' he so abhors, this attractively edited volume of essays should be read, pondered, and even enjoyed... Provocative evaluations such as these are the very essence of responsible criticism."— Denver Quarterly

"Organized to highlight Eshleman's progress from defining his own sphere of freedom by shedding the conventions of thought and behavior that he had been raised with... The title suggests the yin/yang dialectic involving such pairs as poetry and prose, and the erotic and the artistic, by which [Eshleman's] ideas, style, and self developed." --The Small Press Book Review
Clayton Eshleman was internationally recognized as a major force in American poetry for his poetry (some 50 volumes since 1961), for his translations (of Vallejo, Cesaire, Artaud, and many others), and for editing two important and influential literary journals (Caterpillar and Sulfur). He died in 2021 at the age of 85.