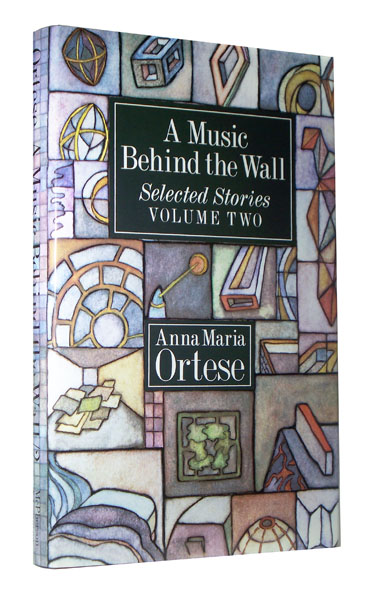 A Music Behind the Wall, Selected Stories, Volume Two

Translated from the Italian by Henry Martin.

To enter Anna Maria Ortese's short stories is to surrender to a strangely intimate voice and a disturbing vision of enchantment: a realm of the imagination just beyond the senses, yet grounded to life in all its complexity. Her deceptively forthright tales include a chance encounter with a 112-year-old pixie, a walk through Jesus and Mary's celestial flower garden, a midnight journey through the Milan train station, a haunting tale of forbidden love, a sea voyage to Tripoli, and the end of the world. Ortese intertwines elements of the fantastic with autobiography, imbues documentary realism with devastating undertones of social satire, and addresses personal griefs in apocalyptic dreams. Widely considered one of the most important Italian writers of the century, Ortese published, in addition to several major novels, seven fiction collections between 1937 and her death in 1998 at the age of 84. The ten stories in this second volume of brilliant English language translations by Henry Martin further demonstrate why critics compare her works of "magic realism" with Kafka and Poe, Hamsun, Borges and Gabriel Garcia Marquez. ​

Add to Cart
Also available from:
<
>
"Deliciously eerie, enigmatic, and resonant symbolic fictions. . . . Ortese's stories, written over more than a half-century of courageously sustained creative effort, are deftly declarative explorations of their author's own inquiring sensibility, packed with autobiographical details and observations and explicitly discursive reportage. . . . Enchanting stuff from a unique writer. If you like Borges, you'll like Ortese." — Kirkus Reviews

"The roster of contemporary Italian fantasists available in translation for an English-speaking audience is a short but superior one. At the top reside Italo Calvino and Umberto Eco, followed closely by Dino Buzzatti and Tommaso Landolfi. To this brief list must now be added the name of Anna Maria Ortese (1914-1998). Although her long career in her native land began in the '30s, only recently have three volumes of her work become available in America: The Iguana , a novel, and A Music Behind the Wall, two volumes of short stories spanning her writing lifetime. Their late appearance here is a posthumous gift of great value to readers of imaginative literature -- all thanks must go to uncommonly skillful translator and editor Henry Martin — and these uncanny fictions should be warmly received.... Deploying simple settings and recurring symbols — railway stations, butterflies, snow, forests, islands, castles, drawings -- Ortese conjures up haunting psychological states of alienation felt by all but the least sensitive among us from time to time, her prose alternately lucid and darkling." — Washington Post Book World

"Ortese's teasingly opaque stories--which defy summary--derive rich, symbolic fantasy from such mundane subjects as a girl's wary idealization of her dispassionate father ('Slanting Eyes') and a writer's delight in her own ingenuity ('The Villa'). In her strongest works--such as the eerie family dramas 'Redskin' and 'Folletto in Genoa'--Ortese suggestively links her own determined 'persona' with the complex ordeal of a civilization traumatized by political instability and world war. The sense of struggle and urgencythat permeates these often discursive stories paradoxically suffuses themwith highly individual specificity and drama." — Bruce Allen, The News and Observer (Raleigh)

"Ortese uses startingly beautiful and delicate language and magical situations to explore the essential nature of existence . . ." — ALA Booklist