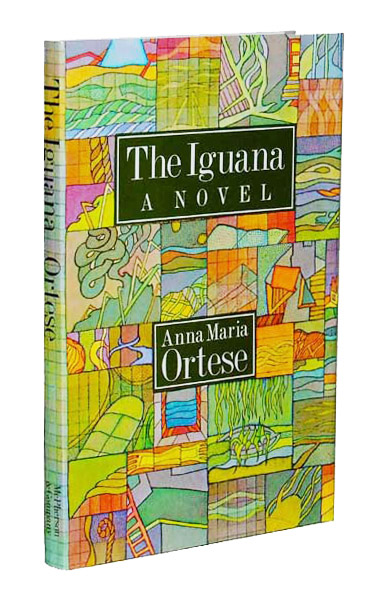 In this magical novel a count from Milan stumbles upon a desolate community of lost noblemen on an uncharted island off the coast of Portugal. When he discovers, to his astonishment, that their ill-treated servant is in fact a maiden iguana, and then proceeds to fall in love with her, the reader is given a fantastic tale of tragic love and delusion that ranks among the most affecting in contemporary literature.

“The reptilian servant is only the first in a series of fantastic touches that transform the narrative into a satiric fable dense with the echoes of Shakespeare’s ‘Tempest’ and Kafka’s ‘Metamorphosis.’ . . . The Iguana is a superb performance.”—New York Times Book Review

For the hardcover, go here.

Add to Cart
<
>
<
>
<
>
"One of Anna Maria Ortese's best known examples of Italian "magical realism," The Iguana is a complex story of twists and turns, with roving aristocrats, uncharted islands, poetry, religion, class struggle, introspection, philosophical debate, and a servant who is an old woman — no, a large, ancient lizard — no, a young lizard — no, a beautiful girl in a lace dress — no, a servant in grey rags. Abrupt plot shifts intermingle with high flying rhetoric: "if excitement strikes you as a target hardly congruent to the vast potentialities of money, then consider the strict correlation between financial abundance and the impoverishment of the senses." There are echoes of Kafka and Shakespeare's The Tempest; there are dark cellars, deep wells, and tall, grey towers. Read in a single-minded quest to unravel the mystery, the novel careens and jolts like a fun house ride and ends with more questions and uncertainties than when it began. If, on the other hand, readers approach The Iguana like a two thousand-piece puzzle - pick up the pieces and look at each shape as well as how they fit together, read sentences more than once just to feel the rhythm, marvel at word choice, and try to figure out the implications in what the characters are saying - they will be amply rewarded with both more answers and more mysteries." --from 500 Great Books by Women, review by Erica Bauermeister

"Anna Maria Ortese has called up the myths of the tortured aristocrat; the abused brute; the false innocent who cannot admit his desires; the blameless sinner caught helplessly in her sins; and, above all, the myth of the human soul." — The Nation

"The Iguana is a novelistic fable invented with surprise after surprise on page after page, a calmly reasoned nightmare. ... It has its own logic and respects its own archetype -- the wrinkled little bright green beast marked by fate and faithful to those who despise and abuse her. She is the archetype that excites our sense of anguish." — Alfredo Giuliani, La Republica (Milan)

"[The Iguana] has romantic richness, and the magical strangeness of the island and its inhabitants reminds the reader of such 19th-century poems as 'Lamia' and 'Christabel.' For in The Iguana, as in much Romantic poetry, the line between madness and sanity, reality and imagination, truth and fiction, is blurred." — Antioch Review

"Even when Ortese measured herself against the novel -- and she has done so stupendously -- she remains a writer of tales; and her most illuminated tale remains The Iguana, for which human language has but a single adequate term: the book is a masterpiece." — Dario Bellezza

"Anna Maria Ortese is an important figure in Italian literature. One should make no mistake about it: she's a figure of the very first magnitude." — Prof. M.G. Martin-Gistucci, Bulletin du Centre d'etudes Franco-italien