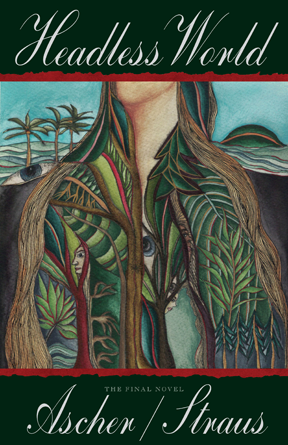 Headless World, or, The Problem of Time

Composed of one hundred thirty-one chapters divided midway by a solid red page, Headless World confronts the invention of Time within the universe of human experience, memory and desire. Impressionistic, disruptive, and hermetically philosophical, this is a strangely alluring, disturbingly prophetic, and comically horrifying novel. The edges between human reality and inhuman fantasy are sharply observed and imbued with saturated colors, sensual cravings, sonic banality, ontological mystery, theatrical cruelty, and an encroaching trans-human future.

“There’s something uncanny about Headless World, as if Death were broadcasting a mysteriously encoded sit-com to let us know it’s on its way, or as if an alien species that had devoured our memories was now using them to shift the syntax of our thoughts. As if several childhoods that had only ever appeared on television suddenly came to life as an amnesiac’s fragmented memories of the twentieth century, the laughs played for horror and the horror for laughs. A strange object, unlike any other book you’ll ever read, relentless, hilarious, a ferocious trance, a secret key. The final Ascher/Straus novel will help you think about time and memory and what’s been missing from the screens that replaced our heads—almost all of us, almost everything. A brilliant lucid dream about technologies that continue to root so deeply into reality that they’ve become the fairy tales we recite to children as we’re decapitating them one more time.”—Stephen Beachy, author of Glory Hole and boneyard

“What is it that we are, and also where and when are we? There’s static on the TV and in our heads and this fuzziness is questioning whether memory is real or just a glitch in the programming. If time is a human problem, then our childhoods may or may not exist; our memories torment us as a thinning reality of an ever-abandoning before. In Headless World, nobody looks like ‘themself’ and the ‘self’ is a slippery, pretzely concept always a distance from characters waking up in familiarly unfamiliar landscapes reminiscent of both the future and the past. The promise of death infuses every utterance of Ascher/Straus’ final novel like the fetid scent of a dying animal caught somewhere in the walls of our house — it’s everywhere and nowhere, so close and yet wholly unreachable, a brutal presence of the Real we’re forced to sit with, or else abandon completely. That is, the hope of transcendence arrives in the form of a novel that escapes the spoor of endless mechanical reproduction, in a narrative-channel that defies any viral popular culture logic—it’s a “twirling spindle of infinity,” a black hole devouring itself as it churns. I’m so in love with this book.” — Rachel Nagelberg, author of The Fifth Wall