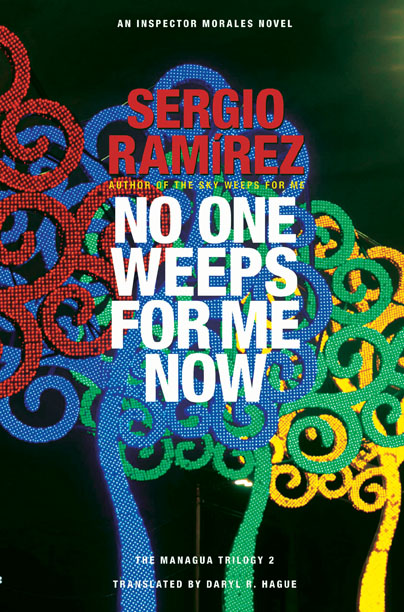 No One Weeps for Me Now

Translated from the Spanish by Daryl R. Hague

Volume Two of The Managua Trilogy

Years after his unceremonious firing from the National Police for an act of heroic insubordination recounted in The Sky Weeps for Me, Inspector Dolores Morales — scraping by as a private investigator — finds himself summoned before a powerful Nicaraguan oligarch, Miguel Soto, whose step-daughter has gone missing. Morales is summarily given the lucrative if daunting task of finding her with only her name and two photographs, and three days to complete the search. But thanks to the intrepid Dona Sofia's ingenuity, and the watchful if ethereal presence of former partner Bert Dixon—as well as a host of colorful if reluctant confederates enlisted from among Managua's demimonde—Morales methodically untangles a scandal of national proportions. As his unwelcome discoveries attract the personal animosity of Nicaragua's director of national intelligence, the pursuer becomes the pursued, and Morales confronts a painful dilemma. Sergio Ramirez's second volume of The Managua Trilogy is infused with his mastery of complex narrative, sharp characterization, ironic humor, and ethos of human resilience. The venality and lust for power underlying the recent history of Nicaragua are vividly brought to life in No One Weeps for Me Now.

Ramirez again combines a taut thriller plot with a searing portrayal of Nicaragua and elements of magical realism with the brilliant second volume of his Managua Trilogy (after The Sky Weeps for Me). Former Sandinista guerrilla Dolores Morales’s career as a police inspector ended after his successful pursuit of drug kingpins angered powerful government officials. Now a private investigator, he’s summoned by wealthy banker Miguel Soto Colmenares, whose stepdaughter Marcela, a recent college graduate, has disappeared while shopping with some friends. Soto hires Morales to find Marcela, but limits his brief to just locating her, and not figuring out what happened and why. As Morales makes the most out of the scant leads, aided by an eccentric group of allies including the ghost of his deceased partner, Lord Dixon, he finds evidence of a cover-up that once again finds him stepping on some influential toes. Ramirez vividly depicts the mean streets and peppers the perfectly hardboiled crime saga with wonderfully strange details, such as a man “carrying an Uzi as if cradling a doll.” Readers will eagerly await the conclusion.