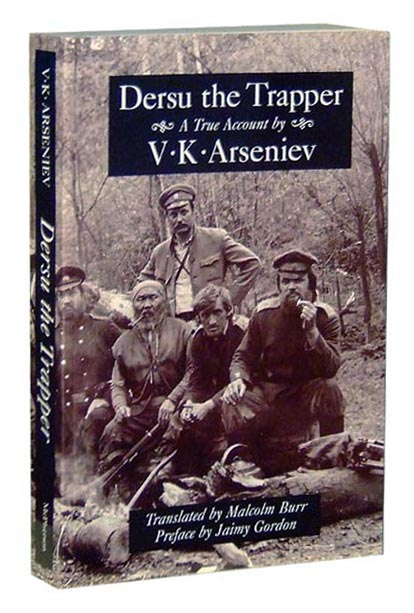 For the hardcover edition, go here.

Vladimir Klavdievich Arseniev (1872 - 1930) undertook twelve major scientific expeditions between 1902 and 1930 in the Siberian Far East, and authored some sixty works from the geographical, geological, botanical, and ethnographic data he amassed. Among these, Dersu the Trapper has earned a privileged place in Russian literature. In this Russian counterpart to The Journals of Lewis and Clark and the novels of James Fenimore Cooper, Arseniev combines the precise observations of a naturalist with an exciting narrative of real-life adventure. Arseniev describes three explorations in the Ussurian taiga along the Sea of Japan above Vladivostok, beginning with his first encounter of the solitary aboriginal hunter named Dersu, a member of the Gold tribe, who later becomes his guide. Each expedition is beset with hardship and danger: through blizzard and flood and assorted deprivations, these two men forge an exceptional friendship in their mutual respect for the immense grandeur of the wilderness. But the bridges across language, race and culture also have limitations, and the incursion of civilization exacts its toll. Dersu the Trapper is both a witnessing of Russia's last frontier and a poignant memoir of rare cross-cultural understanding. Originally published in 1941, this English translation is reprinted in its entirety for the first time.

Add to Cart
Also available from:
<
>
​"Dersu the Trapper is so good a book that one wonders who Arseniev is and why this book had not been translated from the Russian before . . . [It] is a classic that will keep both Arseniev and Dersu alive in our hearts." — Yale Review

"Of the author it hardly suffices to state that he was styled by such an expert as Fritjof Nansen 'the great explorer of Eastern Siberia,' for the surveying primarily associated with the word exploration was but one of the several branches of scientific inquiry that he was equally qualified to undertake." — Time Literary Supplement (1941)