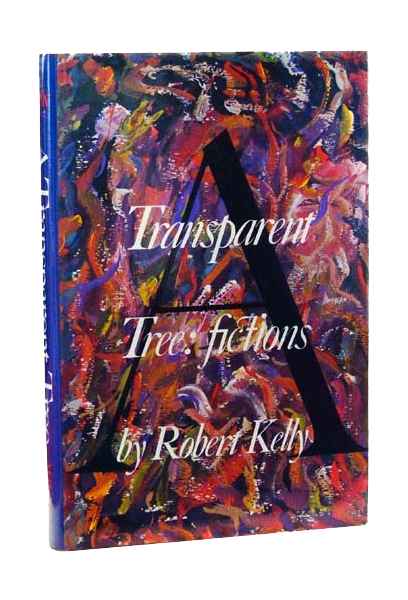 SKU: 2681
$20.00
$20.00
Unavailable
per item
Clothbound, sewn, jacketed, 200 pages, 6 x 9", 1985, 0-914232-68-1
​
Each of the eleven long and short fictions in this book is a mystery of language branching from its imaginary root. Through different settings and events, Kelly explores the dimensions of a central theme -- how people act without knowing what is happening to them, how they move through the enigma of desire and intention while waiting for the world to decipher itself. Written with the clarity and palpably sensuous, carefully crafted style that has won awards for this poetry, this premier collection, which includes the famous novella "Cities," received an American Academy-Institute Award in 1985. Note: An Italian edition is published by Tranchida (Milan) as Un albero transparente.

In addition​, a Kindle e-book edition is available through Amazon.
Sold out
Add to Cart
<
>
"Readers familiar with [Kelly's poetry and essays] will find many of the features of his work from the outset: a lyrical prose style that mixes eroticism and erudition, a focus on the act of perception and on the presentation of sensory stimuli and sexual impulses in highly charged images, a sense of shock, wonder and utter bewilderment that human consciousness exists at all and a primal urge to leave behind a mark of his own particular consciousness in sensuous language.… For all their experimentalism, the stories are usually compelling, full of exotic adventures, erotic encounters and crazed and vibrant central characters. …For all the erudition Kelly brings to these stories (many references to obscure myths and texts, arcane words, unusual sources of knowledge), his most impressive ability is to re-create the exhilarating 'hereness' of physical sensation..." --New York Times Book Review

"Many single-author collections of stories are the same story retold with minor variations; that is not the case here. Each of these fictions is an attempt to explore the capabilities of language to express the mystery and excitement of man's relationship with the universe, the connection between consciousness and its object, and the connection between imagination and reality.... The affinities are with the writings of Borges, Nabokov, Calvino, and Robert Coover." --Choice (American Library Assn.)

"Robert Kelly's Scorpions was one of the finest of the cult novels of the '60s, 'cult' being a euphemism for 'undeservedly underread,' and it alerted us to a very special talent. Since then, we've learned to watch out for his short fictions, often lighting up the literary world with their astonishing mix of intellect, romanticism, and daring imagination. This collection, with such Kelly classics as 'Cities,' and 'The Guest,' is a welcome publishing event." --Robert Coover

"These eleven fictions vary iun length and ambition, from short neo-parables to the thirty-page alternative anthropology of 'Cities,' the story of one man's journeys to secret cities hidden in all corners of the world. In their brilliant invention and intricate detail these cities (and the counrty of 'Wheres') are much closer to those of Harry Mathew's work than to the more romantic Invisible Cities of Italo Calvino. 'Cities' offers no plot, only an illumination of man's restless urge to explore all possibilities. …'The Guest' is a tale of demonic possession, with an erotic slant. A spirit takes up residence in a woman's body, alternately taking and giving pleasure to keep her under control. Kelly's sensual language is at its best in this story: 'I could become her clitoris and preen myself there, like an owl in a canoe, in the slender craft of her lips.' …Treat yourself to this book. Better buy two copies. You may find yourself just holding this book, or tapping the cover as you pass it, or using the spine to cool your brow, and you may wear out one copy. Books good enough to be used as touchstones are rare. This is one." — New Pages #10