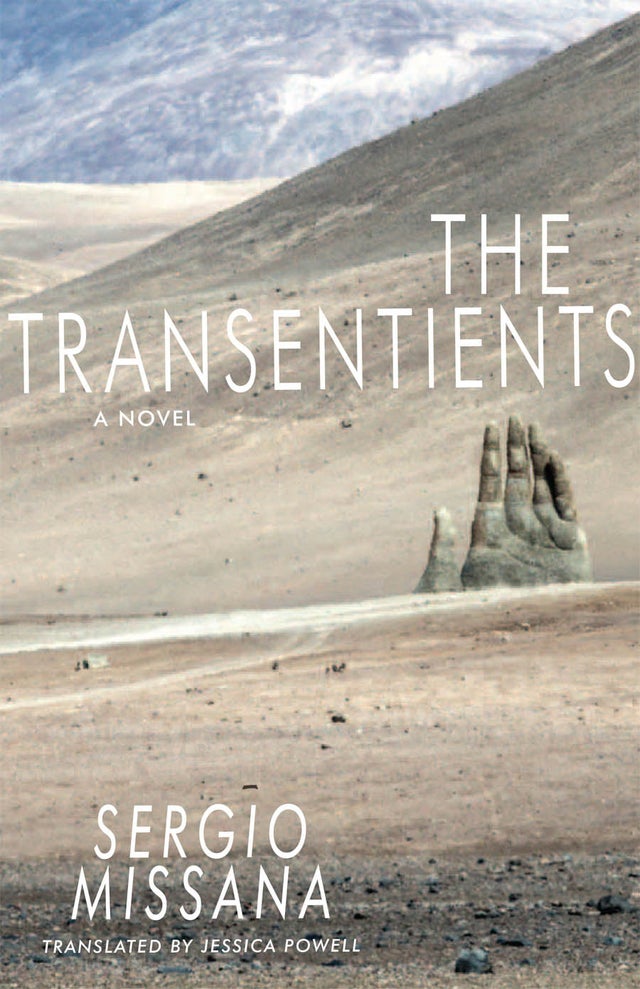 Translated from the Spanish by Jessica Powell

Tomás Ugarte, an advertising executive in Santiago, Chile, is grappling with a midlife crisis—turning forty, quitting his job and in the midst of a divorce—when he begins to experience inexplicable episodes of amnesia. Hoping to outrace this dilemma, he plans to travel abroad for a year and chart the second half of his life. Instead, he will journey into an unexpected, and very foreign territory, one where the boundary between the self and the other becomes dangerously interchangeable. Much like the works of Auster and Murakami, The Transentients defies easy categorization: it is a genuinely disturbing psychological novel that borders on the uncanny. A bewitching puzzle-box with a propulsive plot, as well as a high-wire act of prose, a metaphysical mystery lies at its core that ensnares both the protagonist and the reader. Stretching from the streets of Santiago onto a treacherous escarpment in the Chilean Andes and to the hills of Valparaiso, and then careening out into the vast beckoning of the Atacama desert, The Transentients traverses the porousness of reality . . . and the malleability of consciousness.

Carlos Fuentes called this novel one of the essential Latin American works of the new century: “Missana’s riveting novel throws open a doorway onto the fragility of the self in our time.” Now at last The Transentients is available to an English-speaking audience, thanks in no small part to Jessica Powell’s especially fine translation.

Matt Seidel, THE MILLIONS.COM: ". . . riveting, a tantalizingly suggestive, and immersive read. In the novel, a middle-aged Chilean adman has out-of-body episodes in which he sees and experiences the world through other people’s eyes. (A good neighborly exercise.) Are these chosen vessels—a homeless woman, a stranded mountain climber, a man working on a script for a film set in the Atacama desert—figments of his own personality or clues to some overarching structure, “causal junctions that had not yet been revealed to me but through which I would be able to eventually figure out the rules of the game”?

GOODREADS: "Over time, [Tomás] realizes that in these episodic visions he is actually sharing consciousness with other people and is participating in a fateful web of predestined events. While the premise of interconnected consciousness might seem like a sci-fi cliche, Missana produces a superbly experimental novel. As Tomás inhabits the minds of others, he sees and interacts with people who tangentially intersect with his own life. The narrative becomes intersubjective. Sometimes, it is unclear who is the narrative focus anymore (Tomás? Inés? Matías? Who exactly is who?) There are some brilliantly tragicomic moments when he meets his ex-wife in the body of others. It's like a sci-fi tale of Amphitryon but at the heart of this story is the human desire to have a child."

“Returning to one of Latin American literature’s great trajectories, Missana employs characteristic features of fantastic realism, yet it is his subtle interweaving of detached narrations that sustains the novel’s unique pressure.”— Diamela Eltit

The Transentients is “not only Sergio Missana’s best novel, but one of the best published in Chile lately. He employs a vigorous style to convey an original and fascinating story . . . a tale of many facets that stretches our capacity to believe in possibilities at the frontier of rationality.”—Camilo Marks, El Mercurio

“As we read The Transentients we fall into a cascade of reflected consciousness…we absent our own skins and enter the narrator’s, who in turn absents his own to enter others’. Missana’s greatest achievement is to create a metaphor for the mystery of reading.”— Carlos Franz

Sergio Missana (b.1966) is a Chilean novelist, journalist, scholar, editor, scriptwriter and environmental advocate. He is a professor of Latin American literature at the Stanford University Overseas Studies Program in Santiago, Chile, and Executive Director of the Climate Parliament, an environmental NGO. Missana is the author of seven novels in Spanish, and has published a critical study, La máquina de pensar de Borges (Borges' Thinking Machine), based on his PhD dissertation at Stanford University, in 2003; and a collection of essays, La distracción (Distraction) in 2015. Other works published in Spanish include a collection of travel pieces in collaboration with photographer Ramsay Turnbull; and, with his two daughters, five children's books. Sergio Missana lives with his wife and children in Connecticut.

Jessica Powell has published translations of literary works by a wide variety of Latin American writers, including Antonio Benítez Rojo's novel Woman in Battle Dress (2015), which was a finalist for the PEN Center USA Literary Award for Translation. Other translations include Wicked Weeds by Pedro Cabiya (2016); Pablo Neruda’s book-length poem, venture of the infinite man (2017); Edna Iturralde’s Green Was my Forest (2018); Adolfo Bioy Casares and Silvina Ocampo’s Where There’s Love, There’s Hate (2013) and Silvina Ocampo’s The Promise (2019), both co-translated with Suzanne Jill Levine. Jessica Powell received her BA in International Studies from Vassar College, her MA in Latin American Studies from Stanford University, and completed her Ph.D. in UCSB’s Department of Spanish and Portuguese. She lives in Santa Barbara, CA with her husband, Abraham Powell, and their two children, Olivia and Leo.

Add to Cart
<
>
PUBLISHERS WEEKLY
In this singular portrait of a dissolving identity, Chilean novelist Missana’s English-language debut, chronicles a man’s curious midlife crisis. Tomás Ugarte, a Chilean advertising executive, has recently quit his job and separated from his wife, and begins to literally see the world through the eyes of others: a destitute woman living on the streets of Santiago; a man caught in a Patagonian snowstorm on a climbing expedition; and a screenwriter hired to write a film funded by a mysterious millionaire whose only requirement is that it feature an old theater house in the Atacama Desert. These episodes leave Tomás unsure as to whether he is meant to intervene in the lives of those whose perspective he briefly inhabits, or glean some Wordsworthian lesson about the immortality of the soul. He risks losing himself within these alternative lives, and yet these displacements are also expressions of his own personality, “different modalities of myself, with the various roles I’d been forced, like everyone else, to perform.” Missana gets off to a slow start, but as the duration and intensity of Tomás’s sojourns increase, so does the narrative pull. This slippery tale about characters trapped in a “warped” but revelatory script offers intriguing reflections on identity and determinism, as well as art and interpretation.
https://www.publishersweekly.com/9781620540435

KIRKUS REVIEWS
A man’s midlife crisis includes strange periods when he inhabits the lives of other people.
This is the first English translation of a novel by Chilean writer Missana, who has written seven books in Spanish. The narrator is Tomás Ugarte, the creative director of a Santiago advertising agency, who seeks to restart his life as a tabula rasa ahead of his 40th birthday. He quits his job, proceeds with the final stages of divorcing his wife, and moves into a new apartment. But the normal details occupying his days fade in significance when he has a spell during which he crosses over into another life, experienced through the eyes and other senses of an old homeless woman in a specific Santiago neighborhood. There’s no doubt in Tomás’ mind that “the transformation had truly occurred.” When he returns to being just himself, he searches for the woman and tries to steer her away from something he believes lies in her future. Tomás undergoes more of these “transentient” experiences, including a harrowing climb on a storm-lashed mountain and a screenwriter’s visit to the set of his movie. Each transposition becomes a detailed narrative, and together they offer links or clues in the book’s episodic puzzle of a plot. The climber is a nephew of the homeless woman; Tomás’ ex-wife is also working on the movie. The alter egos provide Tomás with an eerie version of the human attachments he sought to avoid and give the author a protagonist with a highly fluid nature. Missana, abetted by a fine translation from Powell, raises questions about identity, friendship, intimacy, and empathy while building a psychological mystery on the shifting border between realism and fantasy, “a thin membrane that threatened to tear apart at any moment.”
Simenon meets García Márquez in this sly, strange, entertaining work.
https://www.kirkusreviews.com/book-reviews/sergio-missana/the-transentients/​