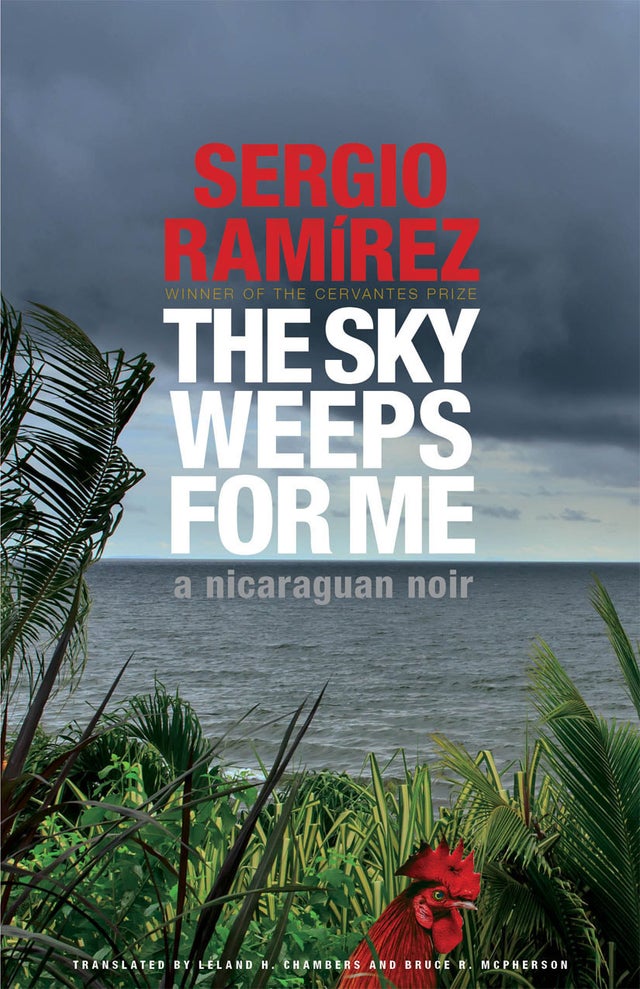 The Sky Weeps for Me

In post-revolutionary Nicaragua, the Chief of Intelligence in the Office

of Drug Investigations, Dolores Morales, takes a call from his counterpart, Deputy Inspector Dixon, who alerts him that a large luxury yacht is grounded and abandoned on the Caribbean coast. It appears to be a simple case of drug smuggling. But when Morales opens the scanty evidence package there’s only a bloody T-shirt and a singed paperback book…until Doña Sofía, the office janitor, asks “Have that book’s pages been checked over yet?” and a woman’s business card falls out. Through a maze of deception, corruption, and murders, the irrepressible Doña Sofía joins the two inspectors as sidekick in their race to learn why the boat was ditched and where the bodies are buried. Soon, though, the trio suspect that a Cali drug cartel capo known as Pinocchio, along with Caupolicán, one of their Sandinista comrades from long ago, might be master minding a dangerous, international conspiracy.

The Sky Weeps for Me offers a host of memorable characters drawn from every strata of Nicaraguan society — rich and poor, working class and professional, as well as scheming politicians, shady casino operators, and tent revivalists — all of them caught up in a relentless drama that bit by bit exposes what happens when revolutionary leaders turn into reactionaries, and how no one is entirely innocent in a country struggling to hold onto the last shreds of its ideals.

The Sky Weeps for Me was originally published as El cielo llora por mí by Alfagura in 2008.

Add to Cart
Also available from:
<
>
SEEING THE WORLD THROUGH BOOKS
"His earlier novel in English, Divine Punishment, focused on the turmoil in the mid-thirties, leading to the eventual dictatorship of Anastasio Somoza Garcia in 1936.  This novel, The Sky Weeps for Me, a true noir, . . . is set in the mid-1990s, an equally difficult time.  Political parties have come and changed and gone; a new generation with new ideas and policies has grown up and become active; and former military officers are often working now in municipal or police roles.  Friends from the revolution are sometimes working toward different goals, and a strong central government backed by a large number of citizens from all social groups has not yet emerged.  As a result, the economy is in tatters, the poor are on their own, and violence is a common theme. . . . The final chapters are the most dramatic, descriptive, and ultimately most effective chapters in the book, and few readers will forget the events which take place during a major rainstorm in which “the sky weeps.”  Morales and Dixon take Morales’s famous “celestial blue Lada” car into the countryside where another body has been discovered and identified, and some additional violence takes place. The complex future for the country and the main characters is left undeveloped, concluding the action for the present but providing hints about a sequel being planned for the future." — Mary Whipple http://marywhipplereviews.com/sergio-ramirez-the-sky-weeps-for-me-nicaragua/

COMPLETE REVIEW
"The Sky Weeps for Me is set in a Nicaragua still marked by the conflicts following the Sandinista overthrow of Somoza decades earlier. (Author Sergio Ramírez was vice-president of Nicaragua from 1985 until the FSLN (Sandinista National Liberation Front) was defeated in the 1990 elections.) Quite a few of the characters were active in the cause; among themselves they still sometimes use the old aliases from their time in the "urban resistance" -- for example, Inspector Dolores Morales is also known by the pseudonym 'Artemio'. Morales, who works in the Drug Investigations arm of the national police, also carries another reminder of yesteryear's struggle: he lost his left leg in the fighting, and uses a prosthesis. . . .
The case Morales wades into here involves the discovery of a quite fancy yacht -- fifty feet, at least -- found run aground and empty in the Pearl Lagoon on the Atlantic side of the country. Deputy Inspector Bert Dixon reports on the finding to Morales -- and then on the what he can piece together about who and what had been on the boat, something that isn't all too easy because the locals of course immediately looted what little there was on board. One significant finding: "There was a corpse on that yacht. Or at least someone was hurt". . . .
The local color, and especially the feel -- especially of the aging (former-)revolutionary generation, in a nation that hasn't managed to live up to the ideals they once fought for -- are the novel's biggest selling point. The Sky Weeps for Me is fine, if unremarkable, simply as a police procedural, but captures and conveys enough to be worthwhile as a glimpse of the foreign -- only a slice of contemporary Nicaragua, but a fairly solid and deep one."
http://www.complete-review.com/reviews/camerica/ramirez5.htm