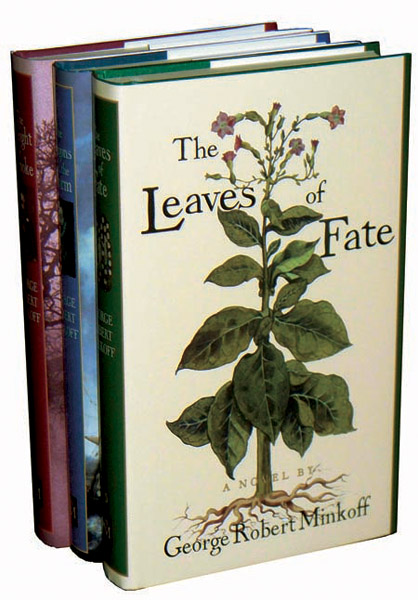 "George Minkoff is one of the bravest men alive. He has gambled that a three-part epic novel about 17th century Colonial America — written in a language that mimics the speech of the time — can hold the interest of 21st century readers and bring satisfactions and delights as a work of contemporary fiction. Remarkably enough, he has won his bet." — Paul Auster

In the Land of Whispers is one of the more ambitious works of historical fiction to appear in recent years. Minkoff's brilliant trilogy chronicles the founding of the first successful English colony in the New World at Jamestown, Virginia, in 1607. Many of its figures are familiar to legend — Captain John Smith, Chief Powhatan, Pocahontas —but the truth is much grander, as this extraordinary work amply demonstrates. In the Land of Whispers might be described more accurately as a "visionary epic," rather than as "historical fiction." Its canvas is vast, intertwining the life of John Smith (the narrator) with that of Sir Francis Drake, the great Elizabethan explorer and privateer whose feats thirty years earlier had inspired Queen Elizabeth to dream of a British empire. In each successive volume — The Weight of Smoke, The Dragons of the Storm, and The Leaves of Fate — Minkoff brings to life the colonists who crossed treacherous seas into unknown lands to pursue a New Jerusalem, only to find their ideals ultimately shattered on the altar of slavery. Yet despite its grand dimensions, this narrative is also intimate — often taking the form of tales of wizardry and wonder. George Minkoff's prose is so rich with metaphor that it captures the era with panache and authenticity. Smith's journals record the events of his own life, and reprise the stories told him around the campfires at Jamestown by Jonas Profit, an alchemist who accompanied Drake on his voyages.

The first volume is concerned with initiation. The second volume with trial and expulsion. The final volume is the book of exile. For additional descriptions, please see the individual volume listings.

​Optioned for a mini-series by Zoetrope Studios