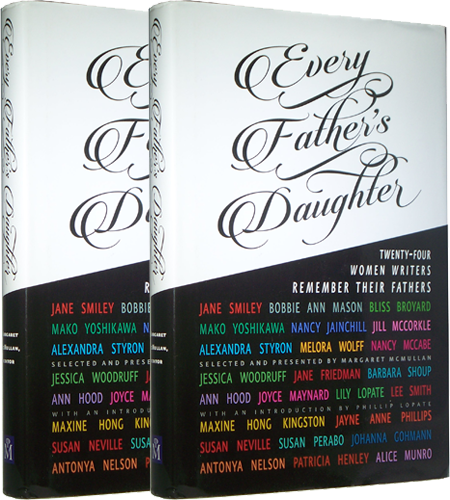 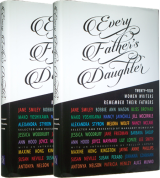 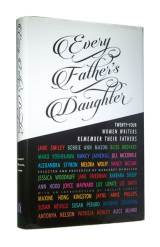 
SPECIAL: BUY ONE COPY GET ONE FREE — NOW THROUGH DECEMBER 2021
(Simply place a single order, not two, and we'll take care of the rest. Offer applies to direct order. Bookshop.org order (see below) is for one copy only.)


“What is it about the relationship between fathers and daughters that provokes so much exquisite tenderness, satisfying communion, longing for more, idealization from both ends, followed often if not inevitably by disappointment, hurt, and the need to understand and forgive, or to finger the guilt of not understanding and loving enough?” writes Phillip Lopate, in his introduction to Every Father's Daughter, a collection of 25 personal essays by women writers writing about their fathers. The editor, Margaret McMullan, is herself a distinguished novelist and educator. About half of these essays were written by invitation for this anthology; others were selected by Ms. McMullan and her associate, Philip Lopate, who provides an introduction. The contributors include many well-known writers—Alice Munro, Jayne Anne Phillips, Alexandra Styron, Ann Hood, Bobbie Ann Mason, Maxine Hong Kingston, among others—as well as writers less well-known but no less cogent, inventive, perceptive, lacerating, questioning, or loving of their fathers.


To read the opening sections, go to the link below.
Add to Cart
Also available from:
<
>
"Whether describing a relationship that is fraught or delightful, a father who is around to advise or whose passing is still a wound, these essays impart a deep love that will move the reader at turns to laughter and tears. . . . VERDICT: A treat for daughters, fathers, and anyone who enjoys exploring relationships and their many twists and turns."
— Library Journal

"Without shying away from the painful parts of life, this anthology celebrates the role of fathers in their daughters' lives.
Every Father's Daughter: Twenty-Four Women Writers Remember Their Fathers, selected and presented by novelist Margaret McMullan, is a heartfelt, honest look at the father---daughter relationship.
"The book is full of fondness, beginning with McMullan's experiences, but disappointment and hurt are inherent in all relationships, and that seems especially true with fathers and daughters. Yet, on the whole, this collection is compassionate and eschews bitterness. It doesn't shy away from the painful parts of life and the failures of fathers. Overall, it is a celebration of the role of fatherhood and a celebration of self---we are who we are, the authors seem to echo, because of our fathers: who they were and who they weren't.
Each chapter is written by a different writer, and the chapters are grouped by three larger themes: "Absences," "Lost & Found," and "Presences." These ideas, in addition to the general theme of father-daughter relationships, unify and give shape to the book. As no two relationships are alike, no two of the women's voices are alike. The sole male voice, the introduction by Phillip Lopate, gives a more distant, overarching picture of the father-daughter bond---tracing linguistic, gender, and sociological facets.
"McMullan includes Nobel Prize winner Alice Munro, Pulitzer Prize winner Jane Smiley, and essayists, journalists, novelists, and writers of various levels of acclaim, and seems to include every literary prize and professional writing achievement. About ten of the selections have been previously published, but the bulk of the anthology is new material.
"This book will be most enjoyable for adult women who are grappling with, cherishing, searching for, or remembering their fathers. These women's voices will also give fathers---young, old, and in between---insight into how their lives and presence affect their daughters.
"In this anthology, nearly every daughter will find a voice that resonates with her own paternal relationship."
— Foreword Reviews

"A collection of essays on the father-daughter dynamic. Editor and novelist McMullan (Literature and Writing/Univ. of Evansville; Sources of Light, 2010, etc.) presents 24 ways of "knowing" one's father by accomplished, independent daughters, each with a folksy introduction to help situate the relationship in place and time. For many of these authors, the father was a tall, handsome, impossibly romantic character in the family, removed from the quotidian, often remote, and whose approval the daughters tried to maintain. In a twist on this theme, Jane Smiley writes how ultimately relieved she was not to know her father—who perhaps suffered from PTSD and divorced her mother when the author was a toddler—because his absence allowed her the space to grow up "free of preconceptions." Some of the contributors offer reminiscences following their fathers' deaths—e.g., Jill McCorkle in "My Dad." In "My Father's Daughter," Bliss Broyard fills in a deeper portrait of her philandering, brilliant, bookish father by talking to his lively, lifelong best friends in Greenwich Village, concluding ruefully that she should have paid more attention to her father when he was alive. Melora Wolff offers an excellent view of the glamorous world of visiting fathers from the first-person, plural view of young ladies at New York City's Brearley School, while Barbara Shoup describes her father's vanishing into alcoholism in her excruciating essay "Waiting for My Father." Throughout, fathers often represent the world of work, whether in the "special places" like the gambling house that Maxine Hong Kingston describes in "The American Father" or the sacred writing den that was strictly off limits to boisterous children, as depicted in Alexandra Styron's "Reading My Father." Other contributors include Jayne Anne Phillips, Antonya Nelson, Ann Mason and Alice Munro, and Phillip Lopate provides the introduction. Consistently elucidating portraits"
— Kirkus Reviews

"Unique, informative, thoughtful and thought-provoking, Every Father's Daughter is a very special anthology that is deeply engaging and exceptionally well organized and presented, making it an ideal and highly recommended additional to personal reading lists, as well as community and academic library collections."--The Midwest Book Review
From the Foreword by Margaret McMullan
“After my father died, I couldn’t read or write, perhaps because, in the end, my father was unable to read or write. I didn’t know it then, but I was looking for a collection of intensely personal essays, written by great women writers telling me about their fathers and how they came to know their fathers, a collection which might help me make some kind of sense of my own very close relationship with my father. I wanted to know from women, replacement sisters, if they had similar relationships with their fathers as I had with mine. Or, if their relationships were altogether different, I wanted to know how exactly these relationships were different. I wanted to know if the fact that my father was southern had anything to do with anything. I suppose, more than anything, I just wanted to know that I wasn’t alone in my love, my loss, my loneliness. I wanted to read this anthology, but it did not exist. Writers write the book they want to read. Editors do the same. This book came out of a need, my own, personal, selfish need.
“Eventually, I contacted the authors I loved and admired—some of them friends, some of them friends of my father’s. I never wanted this to feel like an assignment, but I suppose it was. I simply asked these women to tell me about their fathers. They took it from there. For some authors, the idea of writing about a father just clicked, and they wrote their essays, often within days of the request. We all have stories about our fathers, even if it’s a bad story or a non-story, it’s a story. If you write, you will read these essays and feel the need to write your own.
“I kept my father’s tastes very much in mind during the difficult but joyful process of selecting essays for this book. This collection reflects my father, and, of course, other fathers as well. These essays are a sort of collage or mosaic of fatherhood and all the ways daughters communicate or don’t with their fathers. Of course, there’s a long list of wonderful women writers not included here — this anthology really should extend itself into another volume.”
Click here to download the opening sections.