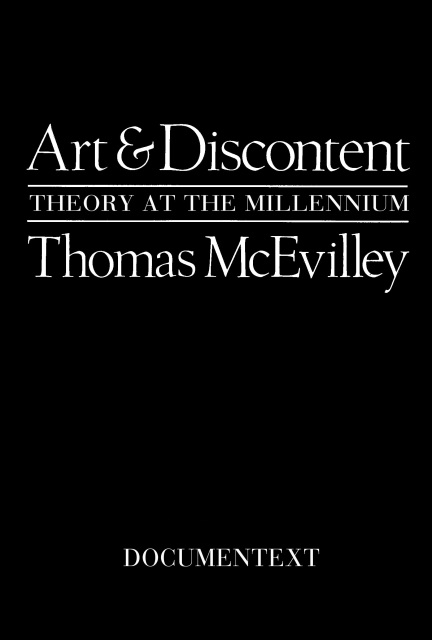 $9.95 For the Kindle edition order directly from Amazon

In the wake of a disappearing “Modernism,” and with an unpredictable “post-Modernism” confounding the art establishment, a world-renowned critic proposes a new vision for the critical enterprise. Thomas McEvilley confronts, in these six straightforward essays, the ideas and philosophies which have exalted art above constructive involvement in the world for two centuries. The formalist aesthetics of Clive Bell, Roger Fry, Clement Greenberg, and Susan Sontag are specifically criticized, revealing their buried assumptions and agenda. The persistence of the Romantic idea of Self is discovered at the heart of Modernism along with ideas of Spirit secretly enshrined in the distinction between abstraction and representation. Mr. McEvilley goes on to shed new light on the roots of Modernism, the collapse of the idea of history, and the subsequent development of a global discourse. He brings to Art & Discontent a commanding knowledge of Greek and Egyptian art, Western and non-Western philosophies, and the most avant-garde of contemporary art and artists. In explaining why our Modernism was not unique and why it is being superseded, McEvilley suggests the functions that art can perform in a post-Modern culture and offers compelling reasons why the history of art needs to be rewritten from a thoroughly renewed perspective.

McEvilley argues, for example, against the dominant theoretical position which removed art from contextual examination by declaring its "sublime" nature somehow elevated above ordinary life, and he goes on to effectively destroy the notion that Modernism in the larger sense is an example of the superiority of technological society. More than anything else, however, he breathes real life into the intellectual understanding of contemporary art in a way that no critic has since perhaps Herbert Read. McEvilley humanizes the undertaking; in addition his wit is evident throughout. Chapters include "Heads It's Form, Tails It's Not Content," "On the Manner of Addressing Clouds," and "The Opposite of Emptiness."

"McEvilley is opting for a new metaphysics in which content rises above the banality of empty eilitism." — MEANING

"This is not a collection of past articles but a carefully assembled volume... In the last essay, “Father the Void,” McEvilley offers what could well become a credo for '90s art criticism: “The critic will come to see art as culture and culture as anthropology. Anthropology in turn will increasingly become a means of critiquing one's own inherited cultural stances rather than firing value judgments in all directions.” — Arts

"Each of the six essays offered here... represents the author's ambitious attempt to demonstrate that contemporary criticism maintains a place in the continuum of the history of ideas."— Journal of Art

"Illuminating and insightful rather than analytic and argumentative." — Small Press Book Review

"The sort of wide-angle view of contemporary art that can help bring some of the barking and bickering [about post-Modernism] into perspective."-- New York Press

"A thoroughly useful lantern in the bramble, a clear call for attention to meaning in art."--Cover