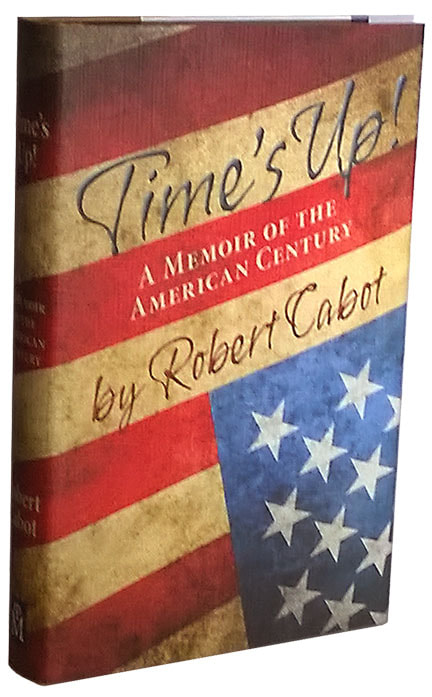 Time's Up! A Memoir of the American Century

SKU: 0367
$25.00
$25.00
Unavailable
per item
Blending history, essay, travelogue, and autobiography, Time’s Up! is a personal and political saga: luminous, probing, and absorbing. At constant odds with his Boston Brahmin lineage and upbringing, Robert Cabot confronts white privilege, rejects the conventional trappings of wealth and fame, and critiques our American heritage of colonialism, imperialist yearnings, and penchant for perpetual war. In alternating chapters we witness his life and the nation’s, from the sepia-toned ’twenties through the color-drained Great Depression, from World War Two through the disquieting cold war, the rise of the counter-culture, and the decades after. In particular, he tells of his search across fifty years for a place in the world. “It was my century too,” he writes. “I return to it, to my memories of my world and my life, the swirls of attitudes and events and people around a long, privileged, and wildly varied American life.” Whether as a State Department official, co-founder of an intentional community, citizen-ambassador, philanthropist, conservationist, or self-exiled novelist, he recounts his adventures around the world—in Kabul, Kunjerab, Moscow, Andalucia, Peshawar, Chaing Mai, Algiers, L’Île Rousse, Naples, Tuscany, Bastia, Rome, Bésançon, Paris, Thailand, Cambodia, Ceylon, Taiwan, Laos, and many other places—and introduces us to a large and equally diverse cast of characters.
Time’s Up!​ is a kaleidoscopic self-portrait, and a devastating examination of our nation in slow but almost certain decline. Cabot’s expansive literary gifts are on full display, whether delivering vital strikes against American “exceptionalism” and hypocrisy, or gratefully embracing “whatever beauty and love life has given us.”

Order direct, or if you prefer, order from Bookshop:
Add to Cart
You may also order through:
<
>
“If I get to heaven and Robert is there, I’ll still have a few questions for him. In the meantime, his memoir about a life of privilege and conscience is a dazzling answer to the question of what it means to become an American writer. And as he’s still here among us in his ninth decade, now’s the time to celebrate the richness of his wild adventures.”
—Susan Cheever, author of American Bloomsbury

“Robert Cabot not only fought in World War II, lived on the land communally in the West Coast counter-culture, and sailed across the Atlantic alone, he sailed through many of the historic moments of the twentieth century. And he has recorded them with a sharp eye. Seldom has anyone ventured so far from the world of Boston Brahmins in which he was born.”
—Adam Hochschild, author of Lessons from a Dark Time and Other Essays

​“Time’s Up! is an irresistible read. Robert Cabot’s penetrating insights and lyrical prose bring us along on his remarkable journey through America’s century. I love the book—it’s a fascinating history and an ode to the beauty of life.”
—Nancy Horan, author of Loving Frank

“Robert Cabot’s elegant and touching memoir of his search for personal meaning and the shaping of a world of compassion and justice. Given the current environmental and geo-
political state of the world, this cri de coeur is sure to resonate deeply.”—Lewis John Carlino, film director and playwright

“At one level, Time’s Up! is the story of how one man, whose lifespan at this point has reached almost a century, walked a path of action in search of deeper consciousness and attained wisdom and insight about himself, his family, and his country. At another level, it is an honest story of America, particularly the twentieth century, and the nation’s moment in the sun, as experienced by a man who was both inside and outside of the system.”
—Stephan A. Schwartz, author of Awakening