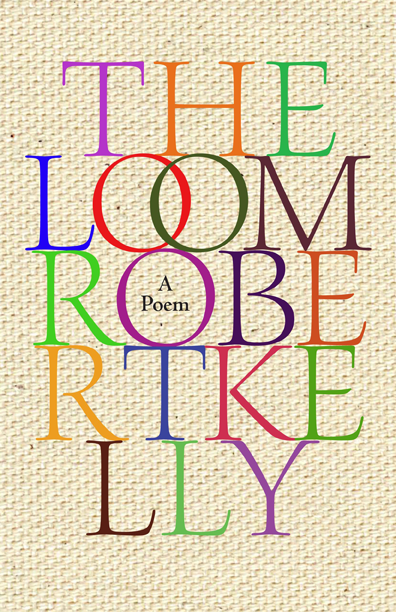 $6.99 For the Kindle edition order directly from Amazon

"The Loom is a long poem of more than four hundred pages by one of America’s most prolific and versatile poets. It takes up a thorny issue of contemporary poetry, the divided self, which is presented in many forms as the speaker ventures over the earth in search of a way to dissolve his own internal oppositions to become whole and imaginative in a new life. Robert Kelly’s voluminous output as a writer is characterized by a lush and vivid imagination and a supple writing style that is clear, crisp, flexible in its command of a wide variety of experiences and topics, ranging from love stories to allegories, fables, romantic adventures, comic absurdity, myth, and occult lore. Hardly anyone compares with him for breadth of interest or facility with language or volubility. His canon comprises over fifty volumes of fiction and poetry, and his output even includes a series of short-story collections that have commanded high praise from critics.

The Loom is an early work that establishes some of the major themes of his subsequent poetry, in particular the complex relation between the sexes, which represents for Kelly not only the dynamics of love, but the terms of conflict between soul and self, ego and world. The Loom is an exploration of the identity of man and woman, self and soul, as these terms undergo a transformation through a loosely jointed quest narrative." — Critical Guide to Poetry for Students Ed. Philip K. Jason. eNotes.com, Inc. 2002 eNotes.com

"Robert Kelly’s The Loom, which was first released 40 years ago in 1975, is a long love poem about discovering the way to express love through language, as the opening lines indicate, “To find a place / to talk to you / or find / a talk / to place you in, / natural contexts.” The Loom is a hero’s journey that begins with Kelly working his way through mythologies as a “headstart / heritage of syntax,” until he can find the language that “transcends the limitations / of cultural presupposition” (49), until he can create the “naked word” (19) and an expressive language of love that comes out of him, “a / language inward” (25) projected into the world. To achieve this he acts likes an alchemist conjuring a language out of himself, a language that is not a textual experience but that becomes a sensual experience once it is spoken, written, or read. In The Loom, Kelly weaves enstatic experience and ecstatic experience into a linguistic tapestry of expression and a physical manifestation of love. The Loom is where Robert Kelly transforms the word to flesh." — Tom Holmes